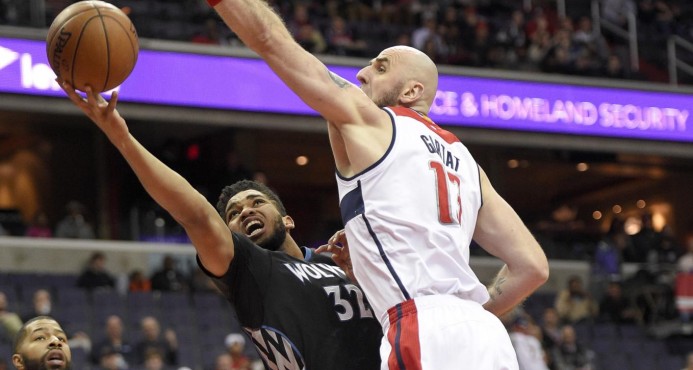 The 2016-17 season has already had plenty of ups and downs for the Washington Wizards. There have been a select amount of constant factors along the way, with one of them being the play of Marcin Gortat.

As the Wizards defeated the Minnesota Timberwolves last night 112-105 to win their ninth-straight game at home, you look at the box score to see who had a big hand in their success. Gortat finished with a double-double of 19 points on 9-of-9 shooting from the field and 10 rebounds. The effort brings him to 21 on the season, which ranks 11th overall in the NBA.

Quietly, Marcin Gortat has #Wizards 21 double-doubles on the season. Ranks 6th in the East and 11th in the #NBA

John Wall, Bradley Beal, and Otto Porter garner much of the attention by the fans and rightfully so, as they all are posting career-high numbers. But Gortat is averaging a 11.7 points and 11.9 rebounds per game for a team that severely lacks frontcourt depth with Ian Mahinmi still sidelined due to injury. It’s just the second time in Gortat’s 10-year career that he is averaging a double-double, the last time was during the 2011-12 season when he played for Phoenix.

Gortat’s elite screen setting is a key ingredient within the Wizards’ offensive recipe. With Wall’s playmaking ability, the duo have been a lethal combination for the past three seasons. His job doesn’t end after setting the ball screen, though. Gortat ranks seventh in the NBA with a 58.6 field goal percentage. According to basketball-reference, his 59.5 true shooting percentage (a player’s shooting than field goal percentage, free throw percentage, and three-point field goal percentage taken individually) is a career-high.

It’s no secret that Washington’s bench has struggled mightily this season. Jason Smith has had a few decent showing as of late, but others just as Andrew Nicholson and Daniel Ochefu haven’t provided meaningful minutes thus far. Once Mahinmi returns, it should mean that Gortat will have the chance for more extended rest periods throughout games. He is currently playing 35.8 minutes per game, which ranks 10th in the league.

Gortat is a player who hangs his hat on coming to work every game. Even if he is struggling to put the ball in the basket, his level of effort or intensity is something that is rarely brought into question. The Wizard will look to keep themselves in the playoff picture as we approach the midway point of the regular season. In order to do so, Gortat’s consistency will be a key factor.