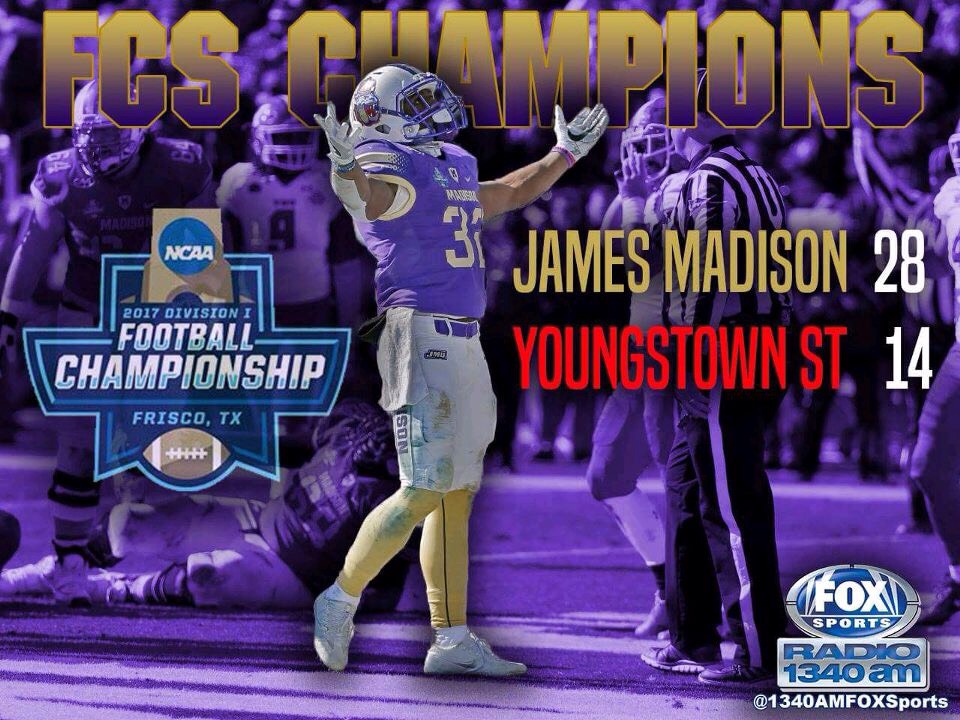 It is the first time in six years that a team other than North Dakota State has raised the FCS championship trophy. James Madison (14-1) was the team that made it from Fargo to Frisco instead, winning its semifinal game on the road against the five-time defending champion Bison.

“A lot of the country probably thought when we beat North Dakota State that we’d have a really great chance to win the championship,” Dukes junior quarterback Bryan Schor said. “Something we really focused on the whole week … we have got to earn the right to win it, and that’s something we came out and I think we did today.”

Schor threw two touchdown passes in the opening 5:30 of the game, the first after James Madison blocked a punt and the other after a shanked kick set the Dukes up at midfield.

“We didn’t start the way we wanted and got behind the eight-ball,” Youngstown State coach Bo Pelini said. “The way we started didn’t help.”

Abdullah finished the season with a school-record 1,809 yards rushing and an FCS-best 22 touchdowns.

The four-time champion Penguins (12-4), who finished their second season under Youngstown native Pelini, made it to the title game for the first time since 1999. Their four titles came during the 1990s under Jim Tressel, now the school’s president after he won a national championship at Ohio State in 2002.

Abdullah’s 1-yard TD midway through the second quarter made it 21-0. He added a 2-yard score early in the third quarter, capping a drive set up by Curtis Oliver’s crazy interception after a pass that was deflected at the line ricocheted off the receiver’s toe without hitting the ground.

“At the beginning of the year, every college football program has this goal,” first-year JMU coach Mike Houston said. “The great thing about tournament play is it’s not up to a vote system or anything like that. You go out there and play it out on the field.”

Youngstown State: The Penguins couldn’t overcome their own mistakes. The punting problems early put them in a two-touchdown hole, and their third possession ended with a botched snap on a field goal attempt. Turnovers on their only two possessions in the third quarter took away any chance of a comeback. Only Georgia Southern (six) and North Dakota State (five) have more FCS titles than Youngstown State.

James Madison: The Dukes’ defense was dominant again, with five sacks while forcing two turnovers (seven in the postseason). That included an interception, which upped their FCS-best total to 21. … TE Jonathan Kloosterman had his fifth TD catch of the playoffs, a 14-yarder less than 3 minutes into the game. He had only two TDs in the regular season. … JMU won its other title in 2004, the only other time the team made it to the championship game.