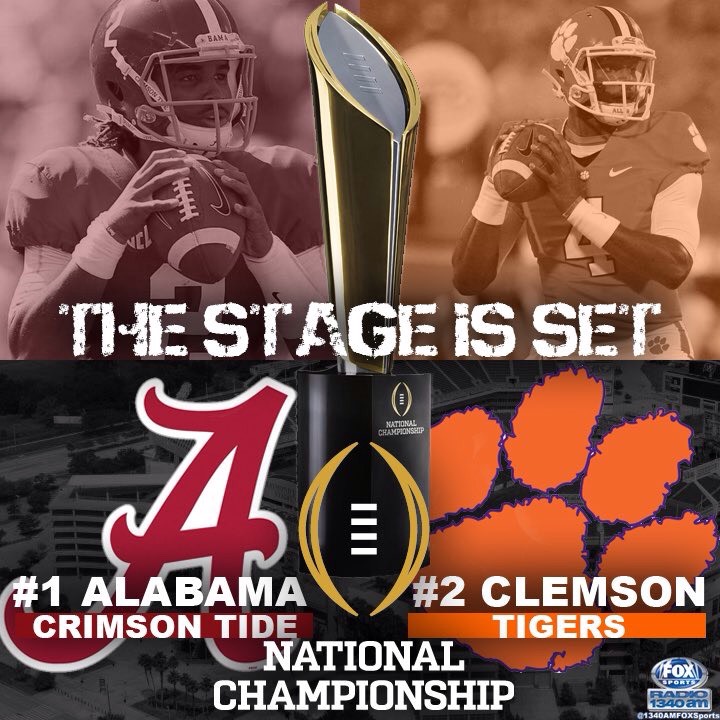 Well, here we are.

The path of the regular season leads us to this. A rematch of last season’s epic 45-40 National Championship game between the same two teams. This year’s Alabama (14-0) team had a regular season journey consisting of a 52-6 wiping USC in the season opener. They also embarrassed Tennessee 49-10, blanked LSU 10-0, and dispatched Washington 24-7 last week in the CFP Semifinals.

Clemson completely walked over the talented Ohio State Buckeyes last week, 31-0. The Tigers (13-1) semifinal victory proved that this Clemson team is more than ready. Redemption is in the brain of the elite bunch of Tigers as well as head coach Dabo Swinney after last year’s loss. The only thing standing in their way is coach Nick Saban and his Alabama squad. Here is the preview for Monday night’s colossal national title matchup.

What To Know About Alabama

It may not be pretty at times, but it can be effective. That is describing the Alabama offense led by true freshman quarterback Jalen Hurts. The 2016 SEC Offensive Player of the Year has 3,511 total yards of offense and 33 total touchdowns. However, he’s coming off a lackluster performance last week against the Huskies. His 107 total yards were overshadowed by running back Bo Scarborough and his 180 rushing yards and two touchdowns. Scarborough has 719 rushing yards on the season with nine touchdowns. Although, sophomore back Damien Harris leads the team with 1,013 yards along with two touchdowns. When the team resorts to the passing game, receivers Calvin Ridley (66 catches, 740 yards, seven TDs) and ArDarius Stewart (52/816/7) are called upon. Junior left tackle Cam Robinson is without a doubt the team’s best offensive lineman.

Statistically, the Crimson Tide sport the #1 ranked defense in the country. With the eye test, the defense has a legitimate argument to being the best as well. The group is led by a future first round pick at middle linebacker in Reuben Foster. Foster is the team’s leading tackler with 103 while adding 12 tackles for loss and four sacks. A pair of elite edge rushers graces the unit also. Tim Williams and Ryan Anderson have 16.5 sacks between them and are also future first rounders. The best player on the entire defense may be lineman Jonathan Allen. Allen has a team-leading 9.5 sacks and third on the team with 15 tackles for loss.

Some say he is the face of college football. However you feel about Clemson quarterback Deshaun Watson, you can’t mistake his talent. Watson is the driver of the 12th ranked offense in college football. The offense also averages 39.5 points per game, good for 13th overall. Watson has 4,173 passing yards on the season with 38 TDs and 17 INTs. Running back Wayne Gallman has 1,087 rushing yards with 16 of Clemson’s 28 rushing touchdowns. Clemson’s passing game is deep and destructive. Receivers Mike Williams (90/1,267/10) and Artavis Scott (73/608/5) along with tight end Jordan Leggett (39/641/7) provide the main targets. Plenty of weapons remain in receivers Deon Cain (33/630/9) and Ray-Ray McCloud (49/472/2).

On defense, an active defensive line sparks everything on this side of the ball. Defensive end Christian Wilkins is a 315 pound bull on the edge and has 13 tackles for loss to lead the team. Defensive tackles Dexter Lawrence and Carlos Watkins have 17 sacks between the two. Redshirt freshmen Clelin Ferrell has also quietly built a strong season with 43 tackles and six sacks. The Tigers average 8.8 tackles for loss per game, third in the FBS. The team is also tied for sixth in the FBS in interceptions with 20. Safety Jadar Johnson leads the team with five. Corner Cordrea Tankersley has four INTs as the team’s #1 CB.

Two heavyweights meet at midfield in Tampa, Florida to decide the king of the mountain. This is without a doubt the two best teams in college football. Settling the score for the ultimate prize.

Turnovers will be key as it always is. Watson tossed two interceptions last week against the Buckeyes. His habit of creating turnovers this season has been troublesome. Against an Alabama defense that has created 27 turnovers on the season, he must be extra careful. In addition, the defense has 11 touchdowns on the season so a turnover can be extra costly for Clemson.

On the other hand, the Tide has a true freshman starting in the biggest game of his career. To their credit, the offense has been turnover-free in their past two games.

Clemson must be efficient in the red-zone. The offense ranks 71st in red-zone efficiency and missed opportunities against a well-coached Alabama team can dig a considerable hole.

Alabama’s front seven will be the story. However, the secondary will have their hands full. Cornerbacks Minkah Fitzpatrick and Marlon Humphrey are two excellent defenders. Clemson will try to attack Alabama from several different angles. We may see a Crimson Tide defense that gives up a few plays.

Alabama has built a reputation as the king of the jungle. Their ability to dominate in the trenches has provided a true identity. In this contest, however, Clemson has an underrated front seven as well. One that has a scary defensive line that is capable of giving Hurts a rough time. With Clemson’s ability to score frequently, it may force Alabama out of their element. Which plays right into the hands of a hungry and talented Clemson team. This go around, Swinney gets the last laugh thanks to a feisty defense and an offense that finds ways to attack Alabama.