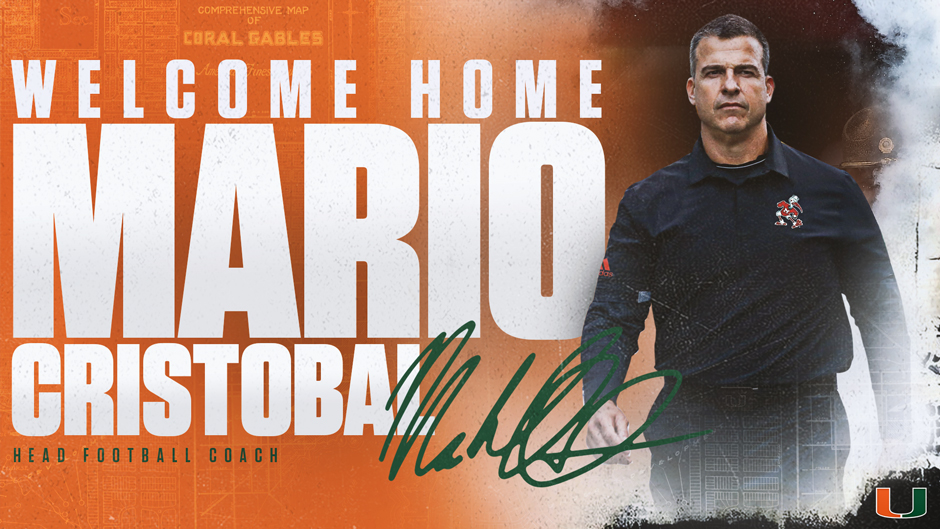 UM President Julio Frenk introduced Cristobal before he addressed the public and said, “The characteristics that helped Mario excel as a national championship-winning player—drive, determination, and discipline—continue to propel his success as a coach.”

Cristobal was part of the 1989 and 1991 national championship teams. He returned to the Hurricanes to start his coaching career as a graduate assistant under Butch Davis in 1998.

When he was named the Florida International University football head coach in 2007, he became the first Cuban American head coach in FBS history.

His most recent accomplishments are leading the Oregon Ducks football team to 2019 and 2020 Pac-12 titles and three straight conference championship games from 2019-2021. His overall record at Oregon was 35-13.

Cristobal was also part of Alabama’s success where he served as assistant head coach, offensive line coach, and recruiting coordinator. He helped lead the Crimson Tide to the national championship in 2015 and a runner-up finish the following season.

Cristobal was born and raised in Miami so he is returning to the place where he started his football journey. As someone who played for the Hurricanes and has served in other coaching roles, Cristobal replied, “What’s more powerful than that?”.

Cristobal felt nostalgia coming home and like today was similar to National Signing Day. “I’m 51 years old and yet as I walk through this morning, the things that come back to mind as if it was just yesterday, is incredible.”

“I can’t wait to compete for championships,” Cristobal said. He hopes to continue the winning legacy of those before him and utilize all the resources that will be made available to him in the near future.

“The best way to get your team better is to introduce competition…and that cannot be a threatening thing,” said Cristobal. The future looks bright for UM Football with the new addition of Cristobal, freshman QB Tyler Van Dyke was voted ACC Rookie of the Year and Offensive Rookie of the Year, and the team that surrounds them. Cristobal said there’s no better quarterback in the country.

Cristobal’s contract is reported to be a 10-year, $80 million deal which many Hurricane fans hope will bring many wins to South Florida.

The ‘Canes play Washington State on December 31st for the Sun Bowl at 12:00 PM ET on CBS.