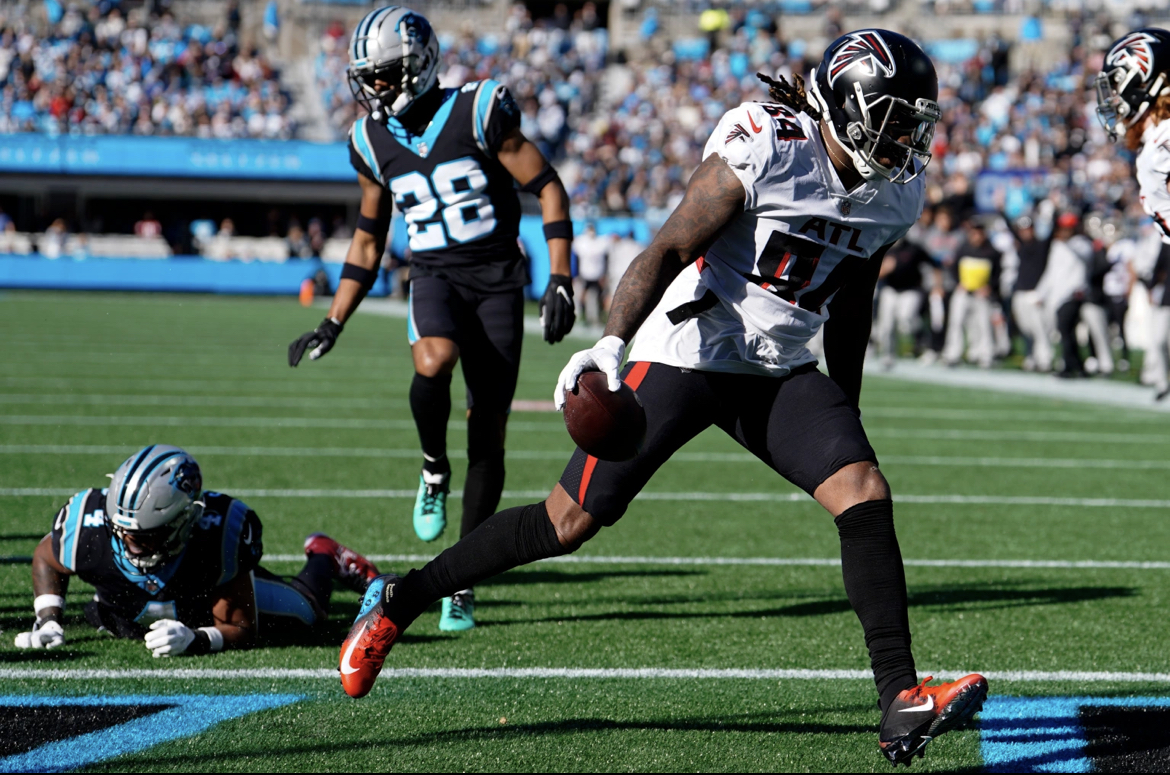 The writing was on the wall when the team announced today’s uniform combination – all black. The Carolina Panthers are 4-12 overall in that particular ensemble so it did not bode well going into an important divisional game against the Atlanta Falcons. The Panthers, Saints, and Falcons all sat at 5-7 going into Sunday’s contests with the Panthers having the edge of being 2-0 in the NFC South division.

It started well enough, with the Panthers holding the Falcons to 3-and-out on their first defensive drive. On the offensive side of the ball, the Panthers marched down the field and capped the drive with a 12-yard rushing touchdown to give Carolina the early lead at 7-0. Atlanta answered with an 11-play drive of their own, culminating in a 5-yard touchdown run by Cordarrelle Patterson to tie the game with 3:03 left in the first quarter. Things began to unravel a bit in the second quarter when Panthers quarterback Cam Newton tried to connect with running back Ameer Abdullah. Instead, the ball landed in the hands of Falcons linebacker Mykal Walker who raced 66 yards for the score. It was Walker’s first career interception and gave the Falcons a 14-7 lead. Kicker Younghoe Koo added 3 points to the lead when he booted a 32-yard field goal with 3:12 left in the first half.

Backup quarterback PJ Walker entered the game with 3:12 to play and was intercepted by cornerback A.J. Terrell on his third play from scrimmage while looking for receiver Robby Anderson. The Falcons lead 17-7 at the half but things started to look up after the break with the Panthers scoring on their first drive of the third quarter. Running back Chuba Hubbard bounced off the right tackle for the 17-yard score and to bring the Panthers within 3 points. It was a good sign as the team has only scored 25 third quarter points all season. In fact, it was Carolina’s first time reaching the end zone on their second half opening drive since a Week Three win over the Houston Texans. A pivotal point in the game came when the Falcons attempted a flea flicker and safety Jeremy Chinn intercepted Matt Ryan. However, the interception did not stand as safety Myles Hartsfield was flagged for a roughing the passer penalty. Instead of the Panthers offense taking the field, the Falcons retained possession and the ball advanced to Carolina’s 22-yard line. the drive was extended and Koo hit a 38-yard field goal to push the Falcons lead to 6 with 6:28 left to play in the third quarter.

Carolina’s day got worse when offensive lineman Cam Erving left the game, briefly, after being shaken up. With Erving’s departure, Dennis Daley moved to left tackle and Deonte Brown went to left guard, Newton appeared to be tripped by a lineman and fumbled as he tried to hand the ball off to Hubbard. Atlanta’s Grady Jarrett recovered for the Falcons at the Carolina 49. Continuing the drive into the final quarter, Ryan connect with tight end Hayden Hurst for a 3-yard touchdown and failed on the 2-point conversion making the score 26-14 with 14:17 left to play. That gave Atlanta 13 points off turnovers. On Carolina’s next possession, Newton was sacked twice for losses of 5 and 11 yards as the Panthers turned the ball over on downs at their own 48-yard line. The Falcons tacked on another 3 points courtesy of a 48-yard field goal by Koo to push the lead to 15 with 6:10 left in the game.

A fumble recovery by linebacker Jermaine Carter near midfield breathed new life into the Panthers as they capitalized off the turnover with a 5 yard touchdown reception by Anderson with Walker under center. The score put the Panthers within 8 with 3:11 left to play. The rally was cut short by the Panthers inability to get off the field on third down – namely 3rd & 14 with 2:15 left to play. Somehow, the defense managed to lose track of tight end Kyle Pitts and he made them pay for it in the form of a 23 yard gain to extend the drive. The Falcons converted another third down with 1:52 remaining. Unable to stop the clock, the Panthers had to watch as the time ticked away on, presumably, their playoff hopes.