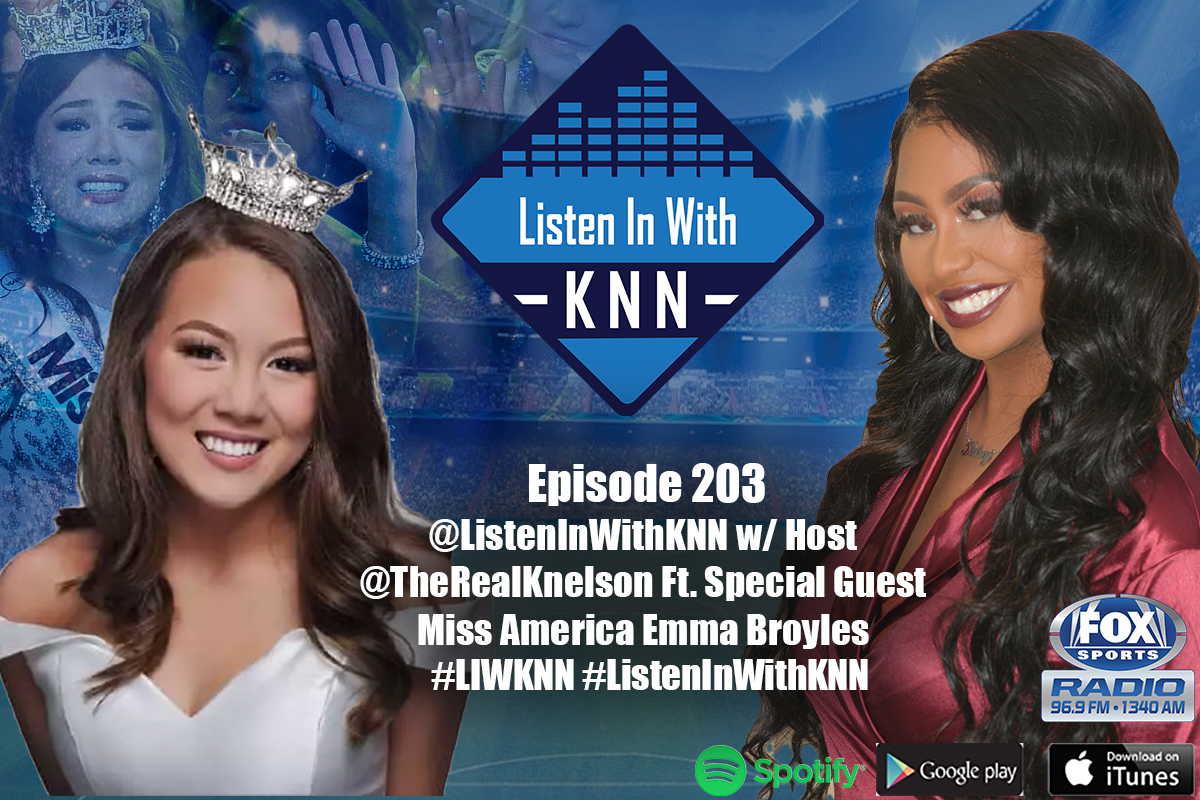 On a special edition of  “Listen In With KNN” sports talk radio/podcast show presented by FOX Sports 1340AM/96.9 FM, executive host and producer Kelsey Nicole Nelson was joined by the current Miss America 2022 Emma Broyles.

Hailing from Anchorage, Alaska, Broyles’ platform as titleholder is focused on building community through Special Olympics. Special Olympics has long been near and dear to the heart of Broyles, as the daughter of a special education teacher and Special Olympics coach. She’s also the younger sister to an older brother with Down syndrome. Broyles’ involvement with the organization began when she was very young. So when it came time to select a platform to bring awareness to as Miss America, it was a no brainer.

“For me, of course, that’s Special Olympics,” Broyles said. “Having an older brother that has Down syndrome, he first got involved with Special Olympics when he was around seven or eight-years-old. So it’s been a part of my life since I was really little.”

During the interview, Broyles highlighted the incredible work that the Special Olympics is doing to help advocate for individuals with intellectual disabilities. One of the most prevalent is their Inclusive Health Initiative, which includes services such as no-cost health screenings at their summer and winter games, and free training for healthcare professionals. Over the last 25 years, they have conducted 2 million free health screenings for individuals with intellectual disabilities.

Broyles has been a longtime messenger and advocate for Special Olympics, and has always been involved in their activities. While in high school, Broyles served as the president of her school’s Special Olympics Partners Club, and believes that programs like such are key to creating impactful and meaningful change. Broyles sees youth centered programs as an opportunity to foster an inclusive environment within schools, and effectively shape the minds of the younger generation. She feels that the experiences youth have with these groups will teach them to carry a sense of “open mindedness, inclusion and empathy” with them throughout their lives.

Inclusion, as well as representation, are ideals that Broyles herself embodies. She made history as the first Korean and first Alaskan Miss America titleholder. When asked how she felt about this monumental accomplishment by Nelson, Broyles responded, “As somebody who is half-Korean and half-white, growing up I didn’t really see a lot of representation in media. And I never thought that I would see a Korean representing America and holding a title such as Miss America. So it means a lot to me to be that person for little girls and boys all over. Representation matters, so I’m glad that I get to be at the forefront of it.”

Being the first, Nelson and Broyles also discussed that special moment,  the night she was officially crowned Miss America. When asked about her emotions in that moment, Broyles said, “When I heard my name in the finals, I broke down in tears and I was so shocked. And I think that shock was enough to carry me through the whole night. My only goal was to make the top 10, and I was so happy to have achieved that goal and become the second Miss Alaska to make the finals. It was such a blur, truly. And the next morning I woke up and saw the crown on my nightstand, and I was like ‘Oh my gosh, it happened.’”

Broyles went on to describe her arrival back to Anchorage that next morning after winning the coveted title. “It was so special. I arrived back at three in the morning and I was greeted by a ton of Alaskans with signs and posters and the mayor and his wife even came out to the airport at 3am just to congratulate me. So it was truly an honor,” said Broyles.

And while the reality of her new position hasn’t fully sunk in for Broyles yet, she’s fully committed to doing as much as she can in her reign to promote her initiative “Building Community Through Special Olympics.”

In addition to her work with the Special Olympics, Broyles is an honors student at Arizona State University, where she’s studying biomedical sciences and voice studies. After graduation, Broyles intends to pursue medical school to study dermatology, and plans to use her $100,000 scholarship in addition to her six-figure salary from her time as Miss America to assist with school tuition. During the interview round of Miss America, Broyles revealed that she has both attention-deficit disorder (ADHD), and dermatillomania, a skin-picking disorder, also known as excoriation. She hopes to use her own experience with dermatillomania to create meaningful connections with patients in her desired career as a dermatologist.

To learn more about Broyles reign as Miss America 2022, you can find her on social media sites @missamerica, and join the #InclusionRevolution by taking a pledge on jointherevolution.org. To listen to the full show, see below!

Lauren K. Stewart is a writer and recent graduate of Howard University.