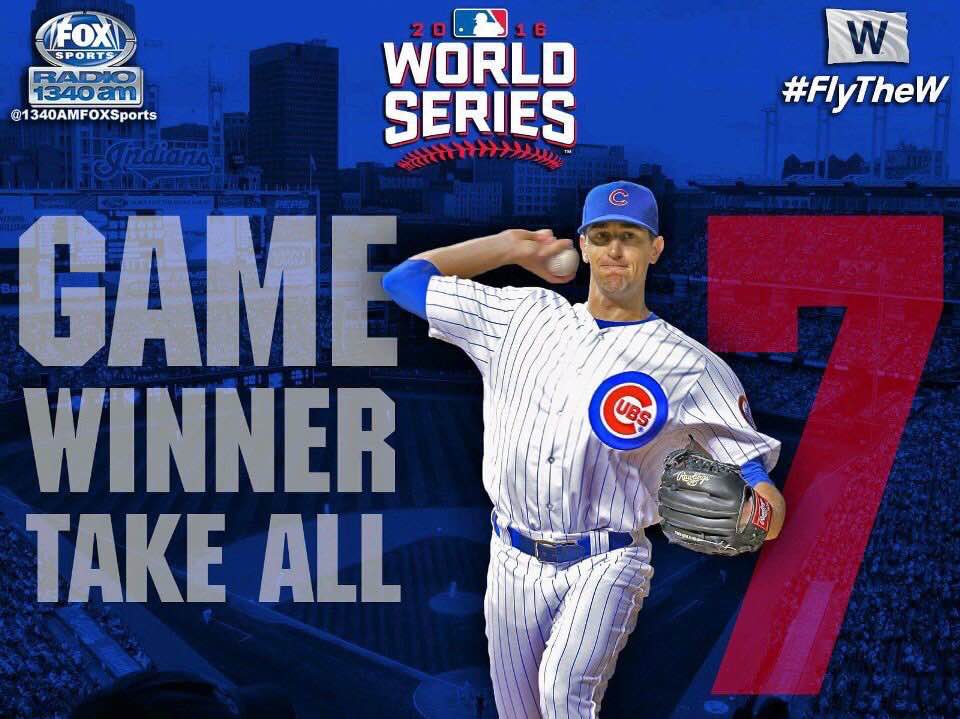 The Chicago Cubs are far from finished. They’re frothing.

Addison Russell hit a grand slam and tied a World Series record with six RBI, and Chicago took advantage of a huge early misplay in Cleveland’s outfield as the Cubs throttled the Indians 9-3 on Tuesday night in Game 6 to push this tense tug-of-war between baseball’s two longest title drought holders to the limit.

Game 7, it is. The biggest, most nerve-wracking day yet.

For one city, hysteria.

For the other, heartbreak.

Kris Bryant homered to spark a three-run first inning, Russell hit the first slam in the Series in 11 years and Jake Arrieta worked into the sixth as the Cubs, who came to Progressive Field one loss from elimination, are now rolling and one victory from their first championship since 1908.

“You dream for that, man,” Bryant said. “We’re going to play a Game 7 tomorrow and that’s pretty special.”

The NL champions, who also got a two-run homer from Anthony Rizzo, are trying to become the seventh team to rally from 3-1 deficit and first to do in on the road since Willie Stargell and the Pittsburgh Pirates came back against Baltimore in 1979.

Maddon didn’t take any chances despite a comfortable late lead, using atomic-armed Aroldis Chapman for one out in the seventh, the eighth and one batter in the ninth. The lefty, who got the final eight outs in Game 4, will be on call for Game 7.

Maddon said he used Chapman as long as he did because he felt the game was still in the balance.

The Cubbies, shut out twice earlier in this Series, brought their cubbies to Cleveland.

They hammered Josh Tomlin, who couldn’t get out of the third inning and didn’t get any help from his outfield in the first. The right-hander, who was so effective in Game 3 at Wrigley Field, pitched on short rest for the second time in his career but wasn’t the problem as much as his location.

Everything seemed to be lined up for a massive downtown street party in Cleveland, which has waited since 1948 for another World Series title.

On an unseasonably warm November day, fans came hoping to witness the first championship win at home by a Cleveland team since the Browns took the NFL title in 1964 by shutting out the Baltimore Colts.

With Eddie Robinson — the last living member from that ’48 title team — in attendance, and LeBron James and the NBA champion Cavaliers coming over from Quicken Loans Arena after they beat Houston, Cleveland was poised to have a night to remember like the one just 134 days ago in June when the Cavs ended the city’s 52-year championship dry spell.

The Cubs blew through those plans like a wicked wind off Lake Michigan.

Arrieta wasn’t dominant, but he didn’t have to be. Staked to the early lead, he held the Indians without a hit until the fourth when Jason Kipnis doubled leading off and scored on Mike Napoli‘s single.

Arrieta worked out of a bases-loaded jam in the fourth, and gave up a homer to Kipnis in the fifth but struck out nine.

Maddon came to get him in the sixth, the right-hander got several pats on the back from Chicago’s infielders and Cubs fans saluted him with a standing ovation.

Tomlin was one strike from getting out of the first unscathed when everything fell apart.

He had Bryant down 0-2 when he hung a waist-high curveball that Chicago’s third baseman, who came in just 2 for 17 in the Series but had homered in Game 5, cracked nearly halfway up the bleachers in left field, a 433-foot shot that sent a shockwave through standing-room-only Progressive Field.

There was a bigger one to come.

Rizzo and Ben Zobrist followed with singles before Tomlin got Russell to hit what appeared to be a routine out. However, right fielder Lonnie Chisenhall and rookie center fielder Tyler Naquin, perhaps unable to hear each other over the roaring crowd, looked at each other and let the ball drop onto the grass for a double.

While they scrambled to recover it, Rizzo scored easily and Zobrist beat a relay throw to the plate, bowling over Indians catcher Roberto Perez as a sizeable contingent of Cubs screamed with delight.

“Lonnie went hard after it, as he should, but it’s Naquin’s ball,” Indians manager Terry Francona said. “He was playing on that side and he’s the center fielder. That was an unfortunate play.”

Although it was early, with Arrieta on the mound, Chicago’s lead felt more like 30-0 than 3-0.

Russell then delivered the knockout blow with his shot to deep left-center.

A walk and a pair of one-out singles by Rizzo and Zobrist chased Tomlin, who walked to the dugout dejectedly as Indians fans tried to cheer him up with an ovation.

Dan Otero came on and placed a 2-0 pitch over the heart of the plate to Russell, who launched it over the wall spent much of his home-run trot howling.

The Cubs were loud all night.

ME AND THE MICK

At 22, Russell became the second-youngest player to hit a grand slam in the World Series. Yankees legend Mickey Mantle was 21 when he hit one on Oct. 4, 1953 against Brooklyn. Russell is the first Cubs to player to connect for a slam in the Series.

Russell tied Bobby Richardson, Hideki Matsui and Albert Pujols for the most RBI in a Series game.

Game 7 will be played for the third time in six years. San Francisco defeated Kansas City in the last one in 2014. . Chapman made his league-leading 12th appearance of the postseason. … Arrieta’s nine strikeouts were one shy of the team Series record, set by Orval Overall in 1908.