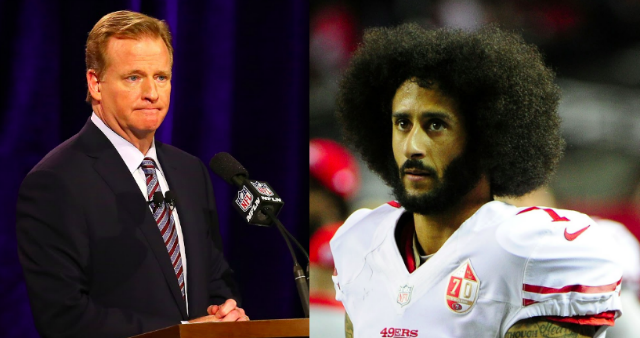 A proposed meeting Monday between the NFL and a group of players, meant to address issues underlying the ongoing protests during the national anthem, was canceled, but both sides are saying they want to “continue the dialogue.” Meanwhile, Colin Kaepernick would simply like to be included in that dialogue.

Lawyers for Kaepernick said that he has not been included in correspondence between the league, a group called the Players Coalition and the NFL players’ union.

While Malcolm Jenkins, who co-founded the group, said that Kaepernick was invited but did not attend player-owner meetings earlier this month, Kaepernick’s team was reportedly shut down when they reached out to both the NFLPA and the Players Coalition.

“We didn’t even know there was a meeting,” a lawyer for Kaepernick told SB Nation on Sunday. “The press release was the first time we heard of any invite.”

“We were verbatim told that Colin had no role,” Kaepernick attorney Mark Geragos told Slate. Kaepernick’s legal team also reportedly had no knowledge of a proposed meeting between Roger Goodell, Bob McNair, and Kaepernick before a letter from the Players Coalition was made public.

Emails obtained by Slate between Kaepernick’s lawyers and the NFLPA also appear to back the claim that Kaepernick has not been invited to any player-owner meetings, which have been scheduled by owners and the Coalition, without direct involvement from the Players’ Association.

Earlier in October, Kaepernick filed a grievance against the NFL alleging that his continued unemployment is the result of collusion among NFL owners.

The NFL has seemly created an impression that Kaepernick was being offered chances to join the dialogue. “We look forward to him joining the conversation,” league spokesman Joe Lockhart said last week.

A story published Sunday by Slate showed an email from the Players Association’s general counsel, Tom DePaso, telling a lawyer for Kaepernick that it was the union’s “understanding” that Jenkins has “remained in contact” with Kaepernick. Another email, from that lawyer to Jenkins, said to the safety, “Once again, it appears that false information is being communicated to the media that Mr. Kaepernick has been invited [to a meeting between players and the NFL], which once again he has not.”

The Associated Press reported Sunday that Jenkins “declined to address” the Slate article. He did say that “league didn’t accept our invitation” to the meeting, adding that the NFL pointed to scheduling and logistical issues.

Where to go from here?

NFL commissioner Roger Goodell, presumably speaking on behalf of many, if not most, of owners, has talked a good game about the League getting more involved in “social change issues” that impact on poor, minority communities. Goodell has met with some of the more outspoken NFL players about their concerns about combatting police abuse, mass incarceration, and racial injustices. These are the very things that Kap sat, took the knee, tweeted about, spent his own money on, and ultimately got kicked out of the League for addressing.

If Kap ever did get an audience with the owners he almost certainly would talk about these causes and press the owners to put their money, time, energy,  behind the support of those issues.  It wouldn’t take much for NFL teams to pump a few more dollars into education, job training programs, and mentoring programs for at-risk youth, and issue a statement here and there about police abuse. These actions are the cheap and easy way for the NFL to show concern.

Goodell and the NFL are walking a thin line between them and all athletes who demand that the NFL be a social change agent. The line gets even thinner when Goodell and the owners continually see tweets and Trump screaming for the League to crack down on the protests. The owners who issue outraged statements, telling Trump to butt out. However, these same owners who are rock solid GOP guys, have given millions to the party over the years, and that includes fattening Trump’s campaign. When Trump pops off about the League, they know that he speaks for millions of NFL fans.

These Owners carry a lot of weight in this discussions. Right now, the players will focus on getting their teams to the playoffs because that’s what they’re paid to do. However, while the owners try to freeze up time and not say anything dumb, Kap then can say what he wants about police abuse and racial injustice.