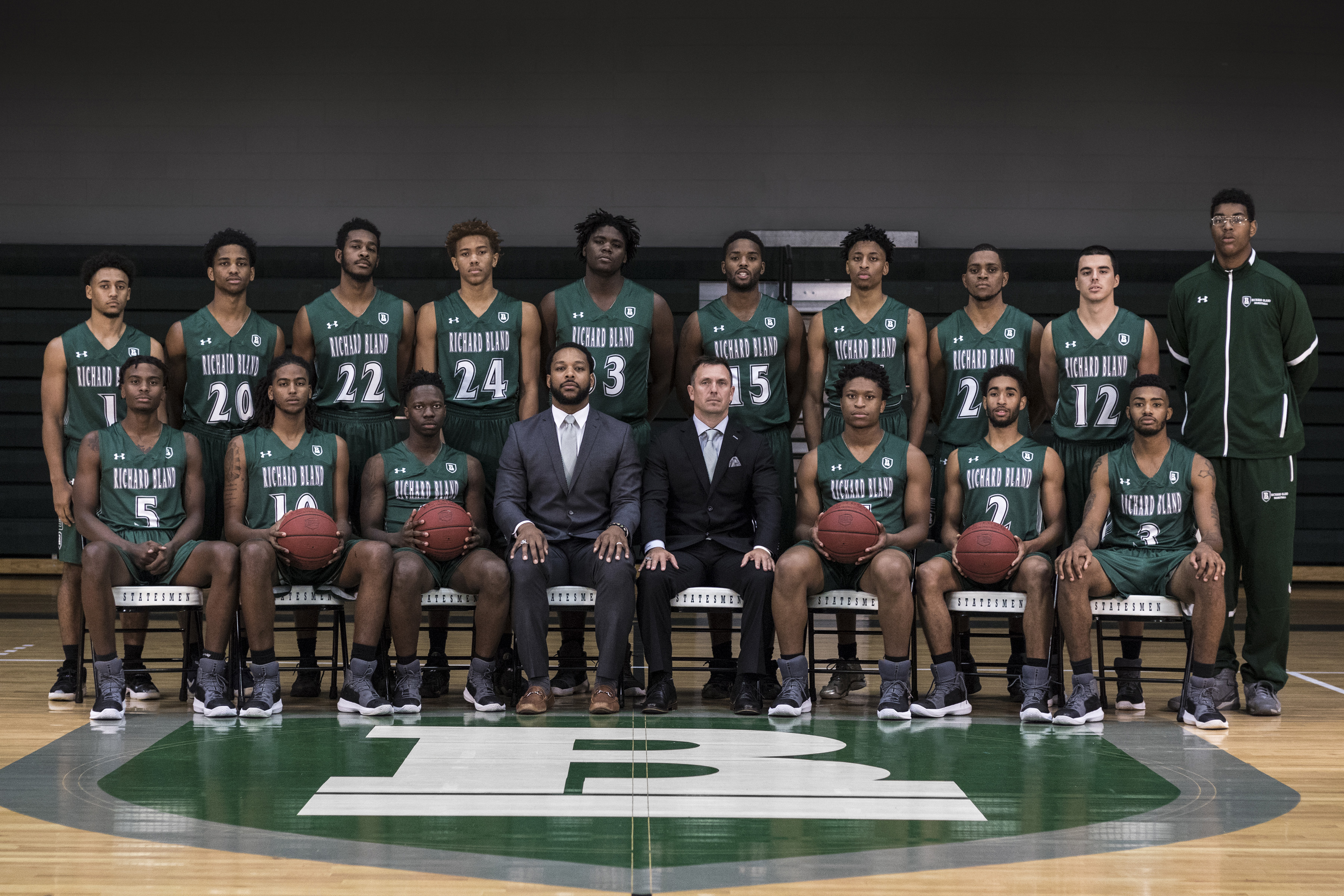 Richard Bland will open its campaign at home against NJCAA Division I Clinton (S.C.) College on Wednesday, November 1, at 7 p.m. at Statesman Hall. The Statesmen have been ranked No. 2 in the NJCAA Division II Men’s Basketball Preseason Poll.

“Our expectations are always the same every year, to achieve a high level of excellence and play the game as hard as we can,” said Moore. “It’s great that we have these many returners back from last year’s Final Four team in the national tournament. We want to have that type of success again … compete for the regular season championship, win the conference tournament and go to the national tournament, and make as much noise as we can and ultimately win another national championship.”

“Tim is a winner on the court and he plays as hard as he can,” said Moore. “He can make plays, many times he creates for others, but he can also create for himself. When we need something to happen, the ball can definitely be in his hands.”

Hicks, a 6-0 guard, started 33 of 35 games and averaged 21.3 minutes, 5.1 points, 2.8 rebounds and 4.5 assists. He shot 37 percent from the field, including 24 percent on three-point field goals, and 67 percent at the free throw line, adding 63 steals and one block while posting six double-figure scoring games and one double-figure assist game.

“Ricky can run the show for us,” said Moore. “He understands what is needed and what is expected each and every day. It’s his job to take care of the ball and get us into the flow of our offense, and hopefully disrupt the other point guard.”

Joyner, a 6-9 forward, started two of 34 games and averaged 10.9 minutes, 4.8 points, 3.0 rebounds and 0.4 assists. He shot 49 percent from the field and 58 percent from the free throw line, adding 12 steals and 19 blocks while posting four double-figure scoring games. Joyner is currently out with an injury and his status for this season is not yet known at this point in time.

“Deon can be an impact post player,” said Moore. “Hopefully, we will have him back soon and when he is available, his presence will be felt instantaneously, because he’s a great post and stretch four and can do things inside and out.”

Smith, a 6-4, 225-pound guard, played in 34 games and averaged 11.9 minutes, 5.4 points, 2.5 rebounds and 0.9 assists. He shot 44 percent from the field and 52 percent from the free throw line, adding 15 steals and five blocks while posting three double-figure scoring games. Smith has been impressive this preseason, in both practices and through several scrimmages.

“Rob can be the engine of this team,” said Moore. “He has the capability of making a lot of plays on both ends. He’s a big, strong guard, can get to the basket and knock down shots, but we need him on the boards and we need him to do a lot of things, including leadership, and I think he is up for that challenge and is really pushing himself to achieve a level that he has never been to.”

Taylor, a 6-7 forward, started two of 35 games and averaging 13.5 minutes, 5.1 points, 3.7 rebounds and 0.4 assists. He shot 49 percent from the field and 71 percent from the free throw line, adding 25 steals and 10 blocks while posting five double-figure scoring games.

“Stanley has been one of the most rapidly-improving players I’ve ever seen in my career,” said Moore. “He’s looking to become a scholarship student-athlete after he leaves here. We need him to produce in the right ways … by rebounding, scoring at times and just being a defensive presence, too, as an experienced player. We expect him to do some things for us this season.”

Among the newcomers, freshmen Miodrag Dronjak/Kladovo, Serbia and Tyler Lloyd/Manassas have been with the program for a year, while sophomores Tre’ Patterson/Richmond and Sterling Carrington/Virginia Beach are transfers … Patterson from NCAA Division II Virginia Union University and Carrington from NJCAA Division I Wallace State (Ala.) Community College. Dronjak is a 6-3 guard, Lloyd is a 6-4 guard, Patterson is a 6-3 guard and Carrington is a 6-6, 230-pound forward.

“Mio and Tyler are both redshirts who understand what is expected each day,” said Moore. “We look for them to contribute in their own way … they’re great role players and bring great energy each and every day. Tre’ and Sterling can be impact players for us … Tre’ has the ability to change a game and Sterling brings a physical presence.”

The other first-year players include freshmen Wayne Clevert/Richmond, Ryan Jones/Smithfield, Tyrell Mendenhall/Newberry, South Carolina, Kenny Southerland/Richmond and Marvin Trotman/Virginia Beach. Clevert is a 6-3 guard, Jones is a 5-11 guard, Mendenhall is a 6-9, 275-pound center, Southerland is a 6-6 forward and Trotman is a 6-4 guard.

“Tyrell is going to be a guy that we can throw the ball to,” said Moore. “He has a high IQ and a strong work ethic, and a toughness to him … we need that inside presence. Ryan should impact us immediately with his playmaking abilities and Kenny will bring a level of athleticism and toughness on the boards. Marvin and Wayne are both capable of knocking down shots and contributing. It’s a great freshmen class that should complement our returners in every aspect.”

So, what kind of team can we expect this season and will the style of play be similar to past years?

“We’re definitely going to play our brand of basketball,” said Moore. “We’re going to have to adjust a little bit early, but we still plan to play high-pressure, up-tempo, controlled basketball. We want to keep teams on their heels and not let them rest, hopefully, we’ll be better conditioned than our opponents, and also smarter and more disciplined and that’s what we expect. I look for this team to be able to do that. We have a lot of weapons, a lot of guys who can make plays, which should be a little more exciting on the offensive end. We have to mix it up on the defensive end and see whether they’ll buy in there, but it will still be Richard Bland Basketball with a little bit of a tweak here and there.”

“We wanted to make a statement early with our players but also with our season,” added Moore. “We’re trying to play the best teams possible. We weren’t happy with the result last year … we want to be in that national championship. I feel like playing a team of Clinton’s caliber, a Division I team in the region … they’ll be scrappy, physical and athletic, and will take us out of our comfort zone, which is what we want. We want a challenge like that right from the beginning to see if our guys can respond and see if they’re ready for it because it’s been a long preseason and were ready to play somebody else now.”

Richard Bland is once-again offering Free Admission to all home games this year in an effort to make Statesmen Basketball more easily accessible for everyone and for all games to be a fan/family friendly environment. Additionally, all fans are encouraged to Wear Green to the first game against Clinton, and free t-shirts will be given out beginning at 6:45 p.m., along with free popcorn available throughout the game. Halftime sponsor Sports Clips of Colonial Heights will distribute coupons for free haircuts and other giveaways, as well.