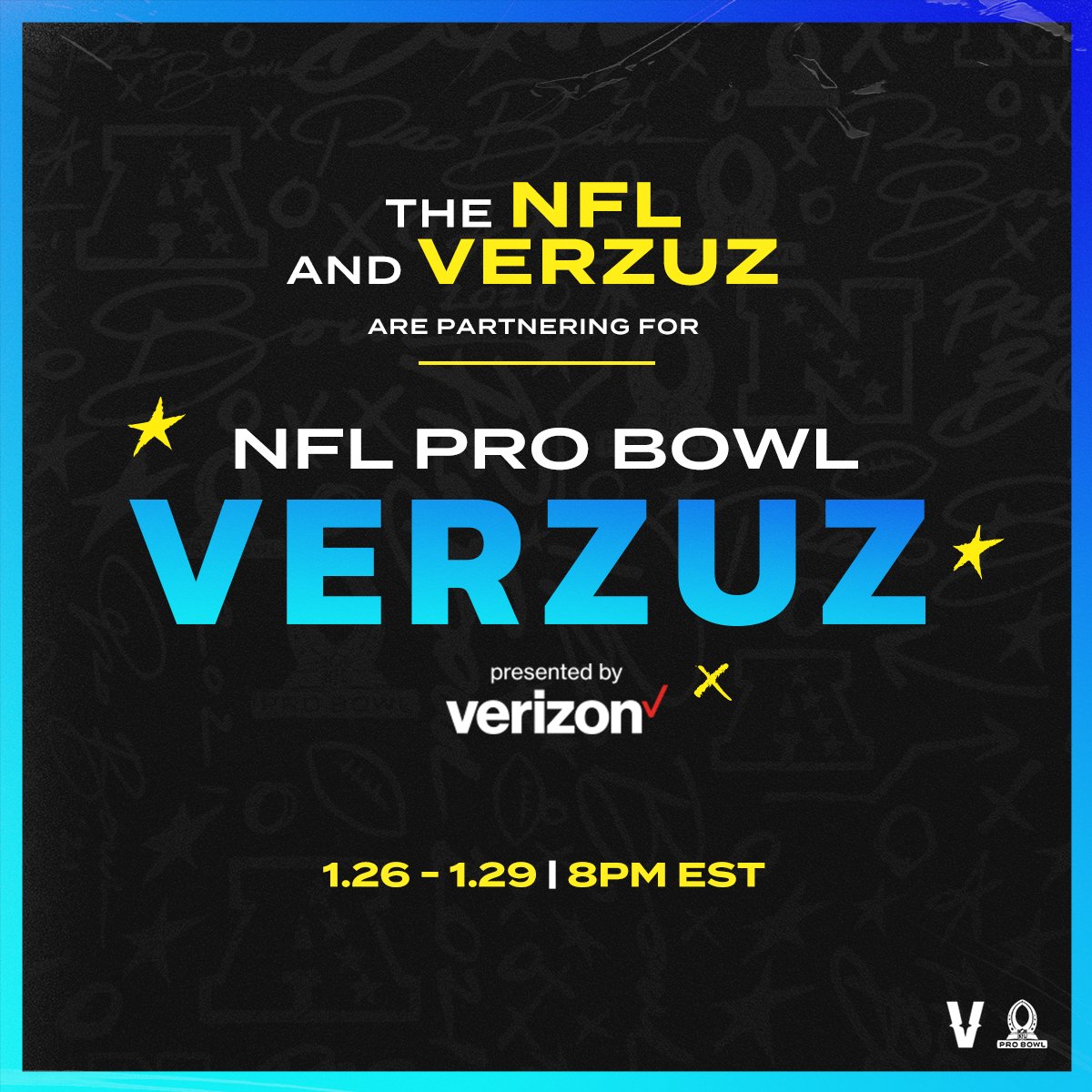 Stuck in the house due to Covid-19, VERZUZ was created by producers Swizz Beatz and Timbaland as a way to keep the masses entertained as the pandemic halted concerts and social gatherings.  With the virus still lingering and the nation struggling to flatten the curve, the 2021 NFL Pro Bowl will not take place in the same manner as years before.  Instead of an all-star game the weekend before the Super Bowl, the NFL is going virtual.  On January 22, the NFL announced its partnership with VERZUZ to create the first ever NFL Pro Bowl VERZUZ, presented by Verizon.  Here is the full statement:

After pioneering an all new form of immersive competitive entertainment in 2020, VERZUZ—the online series launched by Swizz Beatz and Timbaland—comes together for the first-of-its-kind partnership with the NFL to bring you “NFL Pro Bowl VERZUZ presented by Verizon”. Every night beginning January 26 – 29 at 8:00 PM ET on Instagram, Twitter, Facebook, YouTube and more, there will be four days of competitive career highlight battles between several of the most recognizable NFL superstars in the game, hosted by NFL Hall of Famer Deion Sanders and NFL Network host MJ Acosta-Ruiz. Pro Bowl players Deshaun Watson, Jamal Adams, Budda Baker, DeAndre Hopkins, Jalen Ramsey, Cameron Jordan, Myles Garrett and more will go head-to-head in real-time to determine the winners of several entertaining categories, showcasing their talents on and off the field. Full player matchups will be announced on Monday, January 25 via NFL and VERZUZ social media accounts.

VERZUZ has built a platform for artists to showcase their catalogs to a massive global audience, including celebrities, influencers, politicians, athletes and more. Through this collaboration, Pro Bowl players will be able to showcase their most impressive career highlights in a competitive nature, allowing fans to engage with their favorite players in real-time and support them during entertaining debates. The list of players participating in the battles, which will be comprised of some of the biggest talents and personalities in the NFL, will be announced soon. As always, it promises to be unlike anything else in sports and culture.

“I’m looking forward to seeing the players go head to head with their highlights!” says Swizz Beatz. “These guys are icons just like the artists, let’s give them their flowers.” Timbaland adds, “Verzuz partnering with the NFL made sense for us with culture, sports and music being so aligned.”

“Our Social and Influencer programs are centered around developing innovative concepts that help expand the reach of NFL players as well as our game to younger and more casual audiences. This opportunity to connect the NFL Pro Bowl with VERZUZ for the first time is a perfect continuation of our strategy and something we believe both the fans and players will enjoy,” said Tim Ellis, NFL EVP & Chief Marketing Officer. “Through this collaboration, elite Pro Bowl players will get an opportunity to directly engage with fans in real-time in a friendly debate of their career highlights, in an array of diverse categories that will show that our players’ personalities off the field are just as fun and entertaining as their extraordinary talents on the field.”

Elements of the “NFL Pro Bowl VERZUZ presented by Verizon” will also be featured during the ESPN/ABC simulcast of ‘2021 Pro Bowl Celebration presented by Verizon’ on Sunday, January 31, at 3 PM ET. This ESPN special will celebrate the amazing seasons of this year’s Pro Bowl players.

It’s a fun and innovative way to celebrate the accomplishments of the players while offering fans the interactive experience they have grown accustomed to annually.