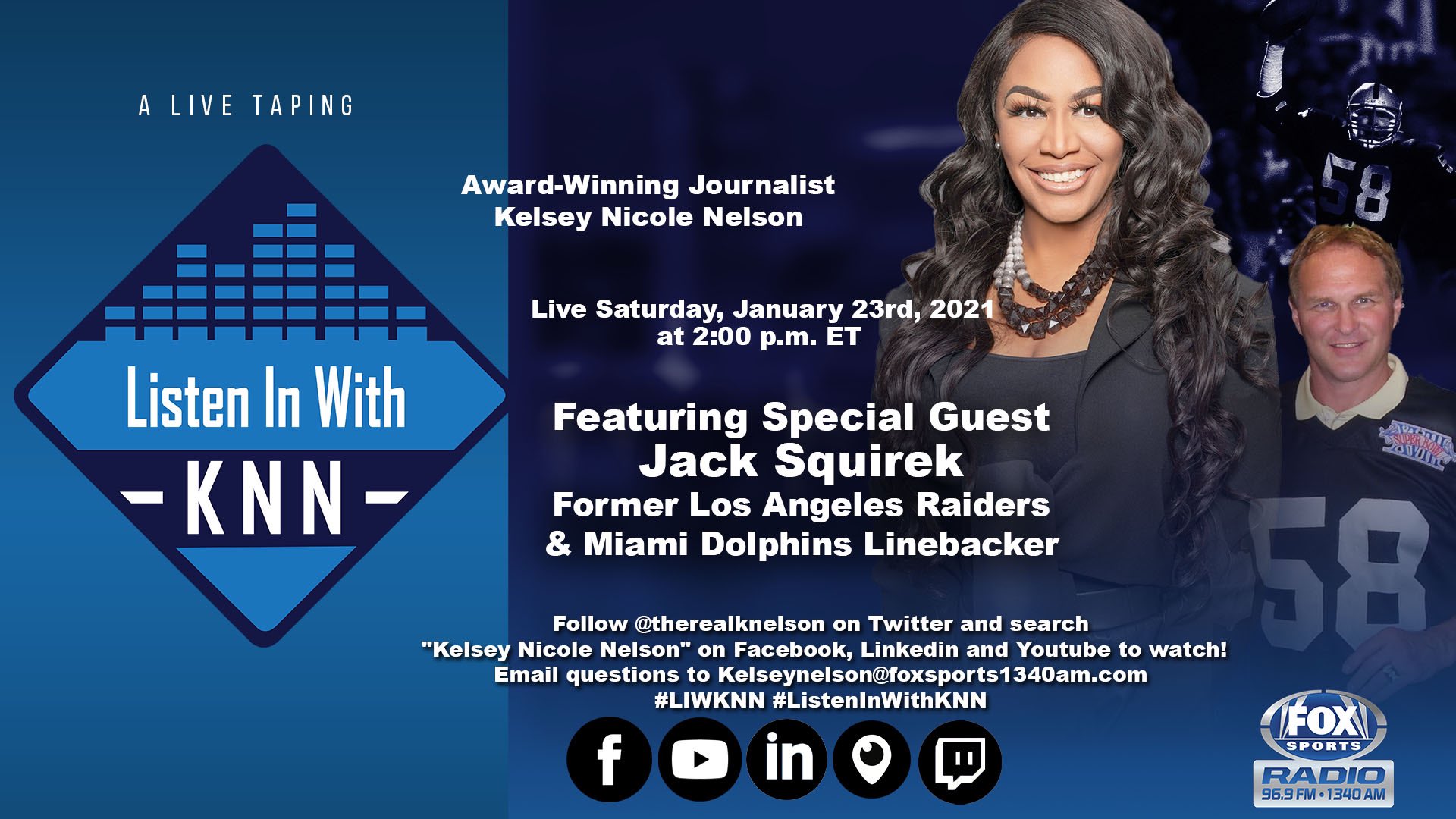 On the latest episode of Listen In With KNN on Fox Sports 1340AM, host Kelsey Nicole Nelson welcomed former Los Angeles Raiders and Miami Dolphins linebacker Jack Squirek to the show.

Speaking of his football journey, he was born and raised in Cleveland, Ohio and was a Browns fan. Squirek attended the University of Illinois where he was a standout linebacker and captain. When he first got to Champaign, the football team wasn’t very good as they won two games during his freshman year. But eventually they started having success in Squirek’s senior year when they won seven games.

“IIllinois is a great school and has some great players like Dick Butkus. It was exciting to play in that tradition. It was great to see the program go from two to seven wins. Couple of years after I left, they were in the Rose Bowl,” he said. “I’m still proud to be an Illini and it was a great experience there.”

Squirek was selected by the Los Angeles Raiders in the second round of the 1982 draft. It was a dream come true for the Cleveland native as the Raiders were one of his favorite teams growing up.

“I remember the first time I walked into the locker room during our first minicamp after I got drafted seeing all these players that were your idols and now you’re playing on the same team with them. The Raiders had that certain image of tough guys and I always wondered if I fit that image. My style of linebacking play was always running around and making plays. Once I got there, I realized not everybody on the team was like that,” Squirek said.

During the 1983 season, the Raiders played the Washington Redskins in the fifth game and lost in a high scoring game, 43-41. Additionally, they were swept by their AFC West opponent Seattle Seahawks. Despite those setbacks, they finished the regular season with a 12-4 record and were peaking at the right time heading into the postseason.

“We had that invincibility of winning. Around the 10th game of the year, we kind of felt invincible. When we came to the playoffs, we played the Steelers and beat them soundly and we beat the Seahawks in the AFC Championship Game. We were peaking at the right time and going into that Super Bowl,” said Squirek.

The Raiders would face Washington again in Super Bowl 18 in Tampa, Florida. He felt some nerves in the first quarter but calmed down in the second quarter. That’s when Squirek made one of the most memorable plays in NFL history when he intercepted a Joe Theismann pass that was intended for running back Joe Washington and returned it for a touchdown.

“Our defensive coordinator, Charlie Sumner grabbed me on the sideline real quick right before we saw a certain formation going in. He wanted me to go cover Joe Washington man-to-man and will have everyone else in a Prevent defense. Right when the ball was snapped, I was locked in on Washington and Lyle (Alzado) pushed him off track when he was going for a screen pass. I made a break on the ball and everything happened so quick. I saw the ball and made a nice break and caught it and was in the end zone within seconds,” he said.

As a result, the Raiders dominated the Redskins, 38-9 to win their third Super Bowl title in franchise history. Squirek played two more seasons with the team before moving on to play with the Miami Dolphins in 1986 for his last year. During that season, he noticed how the Dolphins operated in contrast to the Raiders.

“It was different because the Raiders had a loose atmosphere and practice was laid back as long as you’re paying attention. Going to Miami was a little bit tougher because it was hot and humid. Coach (Don) Shula was pretty strict on me. At practice, you always had to pay attention and it was a good experience seeing Dan Marino play,” Squirek said.

It’s been almost four decades since that memorable play in the Super Bowl and Squirek still hasn’t forgotten about that moment.

“It’s something I’ll never forget. When you win a Super Bowl together, your team is almost like a family. We have reunions every year with the Raiders so we get to see everybody. It’s always special not only winning a Super Bowl but knowing that you contributed like that. I feel blessed that I went to a team that had great players.”