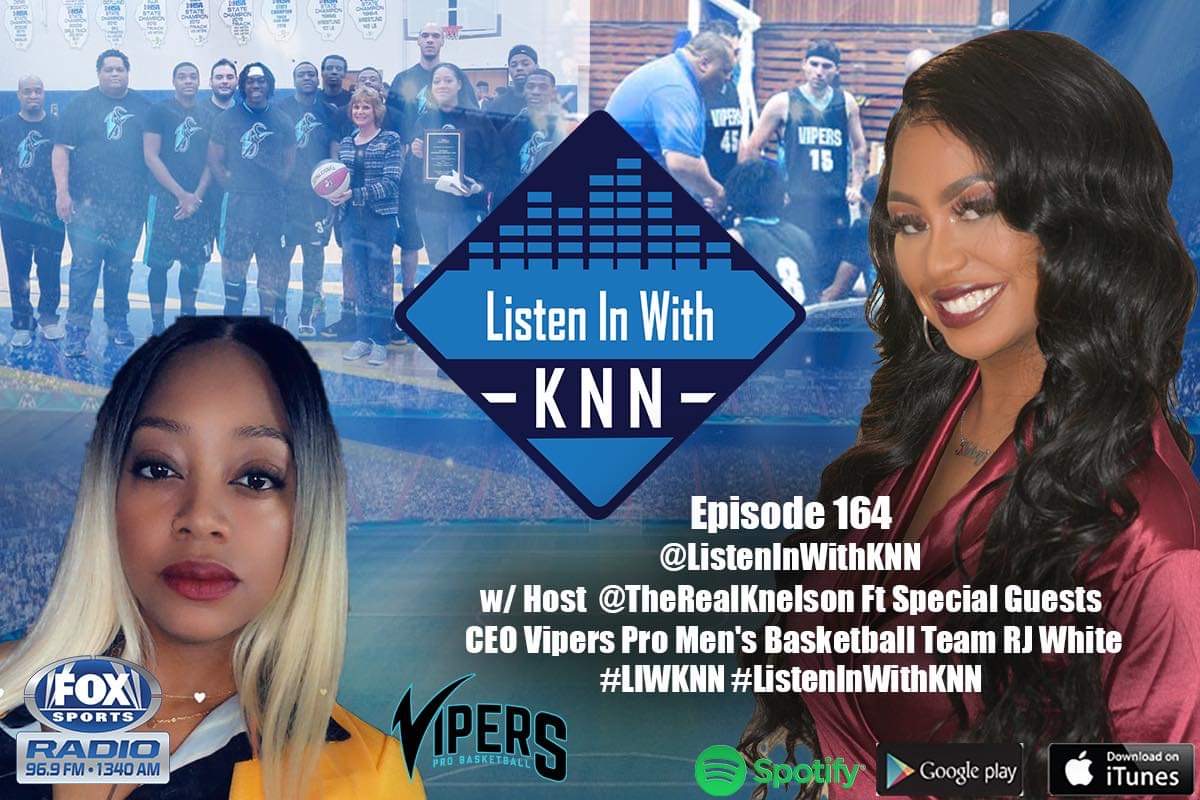 On the 164th episode of Listen In With KNN on Fox Sports 1340AM, host Kelsey Nicole Nelson welcomed CEO and owner of the Vipers Pro Men’s Basketball team RJ White to the show.

She earned an Associate of Science degree from Baker College in computer science. Even though she didn’t come from a sports background, her family and friends were very supportive of her ambitions of becoming a sports owner.

“I did take advice from my dad and he said, ‘it’s not gonna be you executing your creativity to make your dreams and endeavors come into fruition. It’s going to be the backlink of everything that you don’t know that’s going to cause you to be stagnant in your journey.’ Creativity flows easily,” White said.

In 2013, her dreams came true as she became the CEO and owner of an American Basketball Association (ABA) team called the Vipers Pro Men’s Basketball team. It wasn’t easy for White as she worked hard to get investors to invest in her dream without any inheritance. But the Vipers owner has made sure to have the knowledge, resources, network and skills to fulfill her position.

“I feel like I got it under control and the Vipers have been a good stepping stone for me especially with building these international alliances. Just having that seat at the table to know what it looks like and what I can do to excel in whatever team that I am selected for for ownership or to even have a seat at that table,” she said.

The Vipers basketball team is responsible for sending almost 47 of its players to play overseas as an option other than the NBA and G League. Its brand has branched out into 12 countries and were planning on going to expand to eight different countries before the COVID-19 pandemic hit.

“Our audience is amazing and the community accepts us with open arms. We’re usually getting anywhere between 2,000 up to 3,700 as far as capacity is concerned. We’re a family, fun and friendly environment,” said White.

Currently, the team is building its headquarters in Gurnee, Illinois. It’s already been voted as one of the top 100 places to work in the United States even though it’s under construction.

“We literally are using the first innovative technology-based building in Illinois. I’ve been having a lot of talks with a lot of techies and it’s really mind-boggling to see this new generation and their thought process when it comes to technology and innovation. That’s what I’ve been busy with just keeping up with them,” she said.

Speaking of innovation, the Vipers have a digital footprint as their goal is to increase its bottom line and numbers.

“We started pushing the Vipers keywords and doing everything that we can to expand our digital footprint from videos to behind the scenes content on social platforms to keep that relevancy going. It literally boosted us from two million in analytics to practically about 17 million right now in analytics, which is mind-boggling,” she said. “It just tells me where I’m going to go when I have the necessary resources and capacity to expand. COVID has expanded our brand immensely.”

Being the Vipers owner has meant a lot to White as her ultimate goal is to be an NBA or G League owner.

Sometimes, I really have to sit back and look at all that I’ve accomplished. I’m appreciative and humble but it’s not enough. The title means a lot to me because it is a stepping stone for what it is I’m looking to accomplish in the future.”