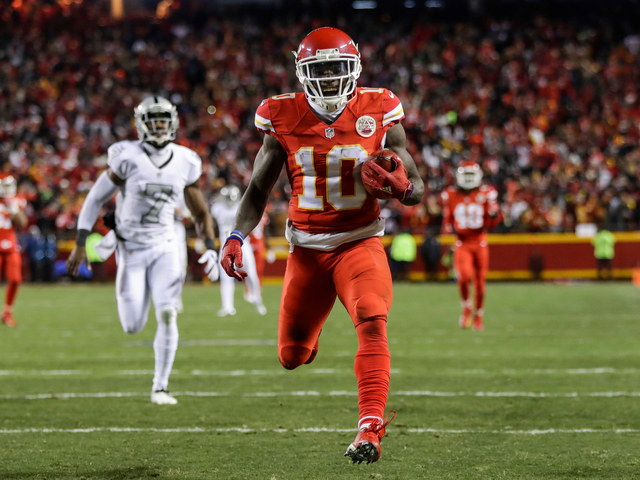 This time of the NFL season, playoff teams are quite evident. They’re the teams who win at whatever cost. Teams who at times travel outside of their comfort zone to add to the win column. This upcoming Sunday, two teams take the field that has won in ways that even their head coaches had to scratch their head a little.

The Tennessee Titans are sitting tied for first place with the Houston Texans in the AFC South at 7-6 but currently, they are also on the outside looking in of the playoff picture thanks to this lovely stipulation called ‘tiebreaker’. Coming off arguably their biggest win on the season against the Denver Broncos, they now face a team in the Kansas City Chiefs (10-3) that have won eight of their past nine and sitting with the #2 seed in the AFC, while also wearing the cap as one of the best teams in all of football. Here is the preview of the interesting contest between the Titans and the Chiefs on Sunday at 1 PM EST.

What To Know About Tennessee

To many outside of Nashville, Tennessee, the play of Marcus Mariota has been under-the-radar this season. The second-year quarterback has thrown for 3,086 yards and 25 touchdowns so far, including thrown for 15 touchdowns and only two interceptions in his past seven games. While he has played great, the Titans also boast one of the best running games in the NFL, ranking third overall behind lead back DeMarco Murray and his 1,135 yards and nine rushing touchdowns. Murray is also contributing in the passing game with 45 catches and three touchdowns. Leading receiver for the Titans is athletic tight end Delanie Walker, who is following up his Pro Bowl 2015 season with another solid season as he is tied for first amongst all tight ends in touchdown receptions with six. Offseason free agent pickup Rishard Matthews leads the team in touchdown catches with seven and second on the team in catches with 49.

A defense led by defensive coordinator Dick LeBeau is usually an aggressive unit that knows how to get after the quarterback. What he has with the Titans this season is just that as they are tied for fifth in sacks with 33. Thanks to a pair of outside linebackers in Brian Orakpo and Derrick Morgan, who have 19 sacks between the two, and defensive tackle Jurrell Casey (24 tackles, three sacks), the front seven for Tennessee’s defense is their biggest strength. The Titans have also totaled eight turnovers in the past four weeks, which the team has won three of those four in the process.

What To Know About Kansas City

The Chiefs are the Chiefs. In their mind, thanks to the guidance of head coach Andy Reid, they are alright with that. They are not necessarily flashy and the injury bug has taken away a number of their top players, yet they still win. Steady Alex Smith has been the fairly solid at quarterback and has completed 67.3% of his passes with 12 touchdowns. He has benefitted from having a star in the making at wide receiver in rookie Tyreek Hill. Hill is second on the team in catches with 56 and leads the team with seven touchdown catches. He has also totaled 34 of his catches in the past five weeks and also has two return touchdowns on the year as well. Tight end Travis Kelce is easily a top five tight end in the league and is having his best season as a pro with 70 catches, 916 yards and three touchdowns.

One of the most debated topics in the NFL every season is who is the top cornerback. Chiefs corner Marcus Peters is in the conversation, which is impressive for a guy who is only two years into his NFL career. Peters is tied for second in the league with five interceptions and has only been targeted 76 times in 13 games this season. Outside linebacker Dee Ford has started to make a name for himself this year with 10 sacks, which leads the team. A team that still deploys one of the better one-two combos at outside linebacker in Justin Houston (4.5 sacks) and Tamba Hali (3.5). Injury losses of defensive linemen Allen Bailey and Jaye Howard as well as longtime veteran linebacker Derrick Johnson has taken away key pieces to the unit but they are eighth in the league in scoring defense (19.6 ppg allowed) despite ranking 27th overall.

Despite one team being a sure shot at the playoffs and the other fighting to earn a spot, this will be one of the best games in week 15. Both teams are coming off well-fought wins and are looking to continue their momentum. For the Titans, the playoffs is in sight and these are the games that will probably make or break their season.

The way the Chiefs have been winning as of late, it’s tough to count them out of any game. The loss of Johnson in last week’s win over the Oakland Raiders took away a stout run defender as he would have truly came in handy with the Titans averaging 144.5 rushing yards per game. Having two massive plugs on the defensive line such as Dontari Poe and Chris Jones is a luxury and if the Chiefs are to take away that element from the Titans, it may depend greatly on their activity.

Chiefs safety Eric Berry will play a vital role in both the run and the pass phase against the Titans. Berry has two pick-6s this season and his defense on Walker while also defending against Murray and rookie running back Derrick Henry will dictate a lot as well.

Mariota and the Titans offensive line may need to be a little more aggressive as usual in this contest. Why? Because Kansas City themselves have flirted with losses this season and four quarter games are sometimes decided on a few plays here and there. A team on the outside looking in when it comes to the playoffs have much less to lose than a Chiefs team that is trying not to lose a potential first-round bye in the playoffs.

Tennessee will keep it close. Just as they did last week against Denver and in a week two win against the Detroit Lions. This will also be the best run game Kansas City has played all season and this Titans offense has not committed a turnover in four games. The walking on hot coals for Kansas City, this time without Johnson and against an elite run offense, may come back to haunt them this week or it could be the week where despite the circumstances, the Chiefs magically come up with a win at home where they are 5-1 this season.