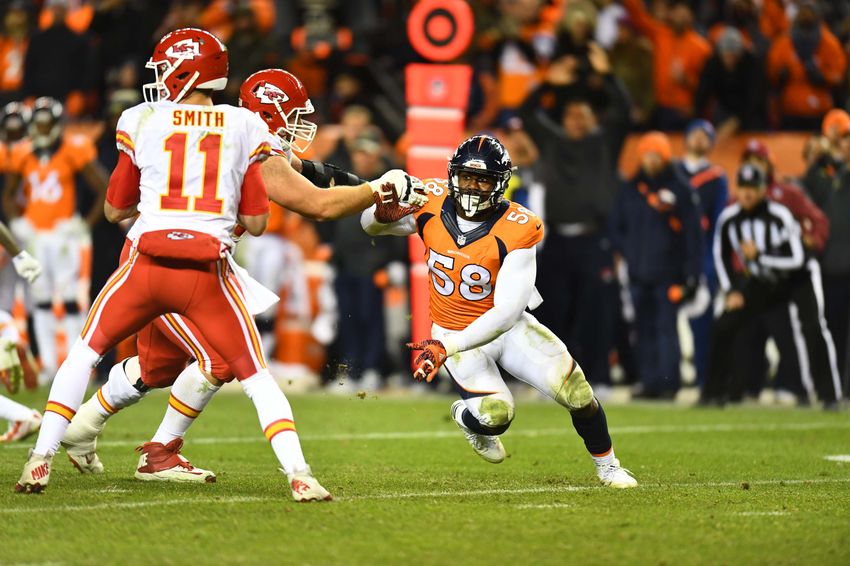 I’m quite sure no one expected this.

No one expected the defending Super Bowl champion Denver Broncos (8-6) to be here. To be fighting for a Wild Card spot this late into the season. Especially with a dominating defense that is known for harassing quarterbacks with elite pass rushing. Yet, here they are. Sitting with the eighth seed and in need of outside help to make the postseason tournament. On Christmas Day, they travel to play division rival Kansas City Chiefs (10-4), who are one win away from the playoffs. Thanks to the Miami Dolphins win over the Bills on Saturday, Denver must beat Kansas City or face elimination from playoff contention. Oh this is going to be good.

Here is the preview and prediction for Broncos-Chiefs at 8:30 PM EST on Christmas Day.

What To Know About Denver

With so much talent on defense, seeing the Broncos in this predicament is puzzling. Of course, it’s debatable that they have the best pass rusher in the game in Von Miller (13.5 sacks, 52 tackles). Flanked with him is the veteran DeMarcus Ware (four sacks) and the improving Shane Ray (29 tackles, seven sacks) at linebacker. The secondary possesses a corner trio in Aqib Talib, Chris Harris Jr., and Bradley Roby that is the main reason why Denver is 1st in pass defense. Although, the unit does have a glaring weakness. That kink in the armor is defending the run, where they rank 29th in the NFL (127.9 ypg).  As a matter of fact, they have allowed 120 or more rushing yards in nine games this season. It’s hard to overlook that flaw but overall the unit has been fairly solid and reliable this season.

GM John Elway made the impactful move of dubbing Trevor Siemian as the starter at quarterback before the season.  That move was met with a few head scratches and some curious faces of course. While he has not been spectacular, Simian has not been half bad either. The former seventh round pick has thrown for 3,012 yards with 16 touchdowns. Eight of those touchdowns have been thrown to the receiver tandem of Demaryius Thomas and Emmanuel Sanders. Thomas leads the team in catches with 83 while Sanders is second with 78. Where the Broncos have struggled is the 27th ranked run offense. An aspect of the game where the Broncos average only 91.3 run yards per game. Rookie Devontae Booker leads the team with 528 yards and has added three rushing touchdowns.

What To Know About Kansas City

They don’t wow you. They just win. A principle that has been applied to most of the Chiefs 10 wins on the season. Now they sit one win away from their third playoff berth in four seasons under coach Andy Reid. Quarterback Alex Smith (2,994 yards, 12 TDs, six INTs) is the true definition of “game manager”. This season, his two biggest weapons have been rookie WR Tyreek Hill (56 catches, 547 yards, and six TDs) and TE Travis Kelce (73/957/3). Getting #1 receiver Jeremy Maclin (37/474/2) healthy will be key down the stretch. Maclin totaled a season-high 82 yards in his second game back from injury last week against Tennessee.

Defensively, the group is stingy allowing points. They are eighth in scoring defense and allow just 19.6 points per game. Recently, outside linebacker Justin Houston has returned after missing the first nine games due to injury. His presence will only enhance a defense that already has seen the emergence of Dee Ford (23 tackles, 10 sacks) as a pass rusher. In the secondary, cornerback Marcus Peters and safety Eric Berry provide a pair of very good 2017 Pro Bowlers. The unit has thrived off turnovers on the season. As a result, nine of their last 10 games have seen the unit forcing at least one turnover.

The week 12 encounter between these two teams expressed unique dynamics. Hill himself scored a touchdown in three different ways (kickoff, rush, receiving). On the other hand, Chiefs corner Philip Gaines however, had probably the worst game of his career. Gaines allowed 209 yards and two touchdowns in the overtime Chiefs win. In that contest, both teams combined for 11 sacks. So you can see that this is somewhat an even matchup across the board.

While we expect Reid to feature Hill heavily, that will be a burden. The Broncos only allowed 190 passing yards and 273 total yards in the first matchup. Not to mention, the Broncos have allowed over 200 passing yards just three times this season. Therefore, Kansas City must attack an identifiable weakness and run the ball on the Broncos defense. Running backs Spencer Ware and Charcandrick West have 1,059 yards and four TDs between them.

The Broncos will enter the game with their playoff hopes in the hands of Siemian. A young quarterback who is facing the biggest pressure-filled game in his pro career. Which means this may need a few turnovers from the elite Broncos defense. Something that did not occur back in week 12.

Recent reports are that Denver has inner turmoil between the offense and defense. Dissension may also be the result of heated locker room discussions. Ironically, dissension both on and off the field. That does not bode well as they head into Kansas City. A back-and-forth defensive fight will probably occur. A Broncos team however is mentally in several different places. Enough to allow a good Chiefs team to take advantage.