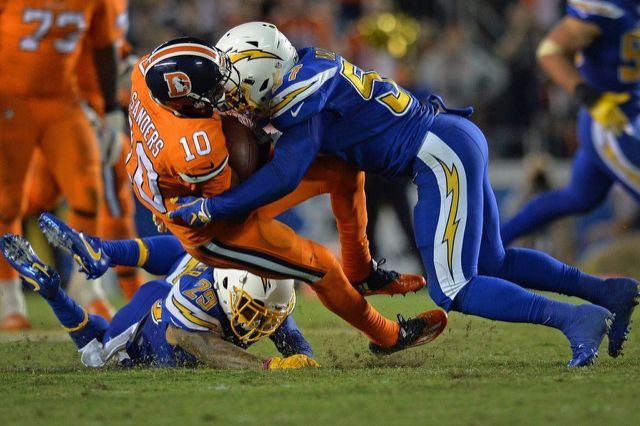 Only three weeks separates the last meeting between the Denver Broncos and the San Diego Chargers. The two teams will meet againSunday at Sports Authority Field in Denver.

The Broncos will be without starting running back CJ Anderson as he was placed on IR this week after suffering a knee injury Monday night in the Broncos 27-9 win over the Houston Texans. Anderson finished the game with 107 yards on 16 carries.

“He played in the game. He played through it,’‘ Broncos coach Gary Kubiak said.

The Broncos will be forced to lean on rookie running back Devontae Booker to fill in for the injured Anderson. Booker had 83 yardsMonday night against the Texans.

The Chargers still have not won on the road in the AFC West in over two years, last defeating the Oakland Raiders in the Coliseum, 31-28 on Oct. 12, 2014.

The Chargers also have not swept the Broncos in a season series 2010. The Bolts will have a chance to sweep the Broncos Sunday afternoon.

RB Devontae Booker: The last time these two teams played Booker got just five carries and averaged 9.2 yards per carry on those five touches in the run game. The Chargers will get a bigger dose of the rookie running back this time around, given he got 17 carries in the Broncos’ win over the Texans Monday night, along with his first NFL touchdown, and Kubiak has promised Booker will be busier in the weeks to come because the Broncos feel it’s good for the offense.

QB Trevor Siemian: Siemian wasn’t full-speed against the Chargers last time as he was still recovering from a left shoulder injury. And John Pagano’s defense always seems to give the Broncos quarterback, whoever it has been, a tough day. Siemian averaged just 4.6 yards per attempt in the last meeting and he threw it 50 times because the Broncos had no run game and were behind for 53 minutes of the game. Siemian looked much better Monday night.

LB Von Miller: Miller is always a player to watch because he now is playing at such an elite level that he influences everything an offense does. The Texans used an extra offensive lineman, lined up as a tight end, for much of Monday’s game to try to slow Miller down. And as a result, the Texans ran two-man routes against one of the best secondary’s in the league and the Broncos dominated even though Miller didn’t have a sack in the game. Miller is the keystone in the defense and he continues to force offenses to make the choice between putting extra players on him and surrendering potential receivers in the pattern.

QB Philip Rivers: Rivers continues to be the leader, and he’s still to showing that he still has what it takes, but he needs some help. So far, he has already thrown for more than 2,000 yards and 13 touchdowns while only throwing four picks on the season. One thing the Broncos need to realize is that the Chargers offensive line is a weak spot, as Rivers has already been sacked 17 times this season.

RB Melvin Gordon: Gordon is proving his worth in his second season with 461 yards on the ground and eight touchdowns. Looking at his rookie season, he is almost at last season’s yardage total (641), and he didn’t have his first career NFL score until this season.

LB Melvin Ingram: After a fantastic 2015 season, Ingram is having just as much success this season, and he continues to get better. Ingram is becoming a true leader on the Chargers and has 4 sacks this season to go along with one forced fumble, and it’s hard for opposing offenses to not feel his presence. No matter where the ball is, you can be sure that Melvin Ingram will find it in a hurry.