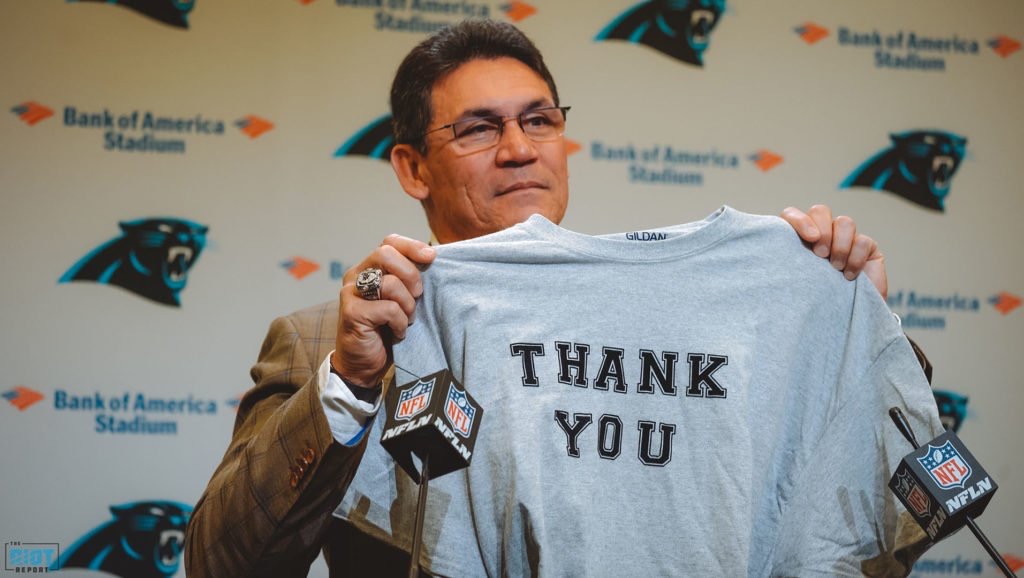 Someone questioned whether any team has found more heartbreaking ways to lose than the Los Angeles Chargers. The Carolina Panthers would like to have a word. Football is a game of inches and in the last two seasons, the Panthers have found themselves on the wrong side of measuring stick far too often. In 2018, seven of the Panthers’ nine losses were decided by one possession; in this current season, five of seven losses were just as close. Even more astounding is the fact that four games were decided by a cumulative two yards.

On Sunday, the Panthers dropped their second home game in a row to a 2-win team after advancing to the one-yard line before falling 29-21 to the Washington Redskins. It was that inch, or lack thereof, that ended an era much more quickly that one would have thought. In 2011, Ron Rivera inherited a 2-14 team and, within two seasons, won three NFC South divisions in a row. However, since the Panthers advanced to the Super Bowl in 2015 before losing to the Denver Broncos, it’s been volatile to say the least. While football is a game of inches, it’s also a game of numbers and with his affinity for analytics, second-year owner David Tepper felt the need to make changes – quickly.

Speaking with a group of media members on Tuesday, Tepper said that his goal for the Panthers is “sustained excellence” and the first step toward that is to change the culture. Asked to explain the timing of his decision, Tepper disclosed that out of respect for Rivera, he did not want to seek out other coaching candidates behind his back. He also expressed that waiting until the end of the season to begin the coaching search would put the Panthers at a competitive disadvantage.

Make no mistake about it; the decision was not easy and Tepper, at times, appeared to get a little choked up as he talked about the man that was just as present in his community as he was on the football field. “I’m sad,” said Tepper when asked about the fans that would be sad to see the Riveras go. “Yes, I would like to see those qualities (exhibited by the Riveras) in the next head coach if they can be there along with the other things which I value.”

“I don’t want a bad person in there,” Tepper added. “I’m hiring a person to win football games, okay? Long term sustained winning – first. I want someone who’s good in the community. Obviously, you guys know how much I believe in that stuff. I’m out there a lot – with charity stuff, things we do with this team. So I would really like that and I think any coach in the modern NFL knows there has to be a certain amount of that.”

While this Panthers-Rivera breakup was inevitable, it has always remained amicable; which is a testament to the two men’s respect of one another. Ron Rivera is a good coach – there’s no disputing that he will likely be hired before the next NFL season begins. However, Rivera no longer fit into Tepper’s vision of the franchise’s future. In an uncharacteristic move, Rivera addressed the media one last time on Wednesday morning where he addressed that particular sentiment. Rivera expressed that Tepper wants to do this his way, with his own head coach, and that he respects him for it.

Wherever Rivera lands next season, his time in the Carolinas is cemented both on and off the field. Rivera says he and his wife Stephanie were so happy to be joining the Panther family back in 2011 that they went to look for some gear to take back to San Diego. “The team was coming off a 2-14 season and you really couldn’t find any gear,” said Rivera. “Interest in the team had been low. But now, you walk into a grocery store and you can see people wearing Luke Kuechly, Christian McCaffrey, or Cam Newton jerseys and I know I was part of that culture change.” As much as he appreciated his time in the Carolinas, Rivera says he is excited for the next chapter. Love him or hate him, Ron Rivera made Carolina Panther football matter and he will be missed.