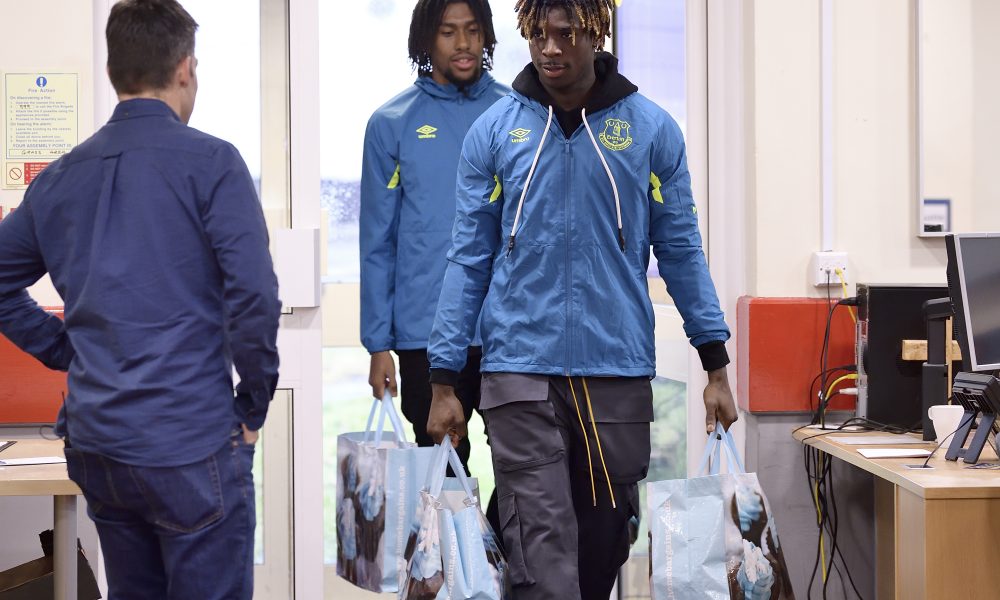 Alex Iwobi and Moise Kean have been finding out how food donations from fans on both sides of Stanley Park are making a difference to the lives of thousands of people across Merseyside.

The Everton duo visited North Liverpool Foodbank to learn more about the work that goes on at the centre, which helps more than 250 people every week.

Kean and Iwobi brought donations of food, sorted them into food types and then packed emergency parcels that will be given to local families in the lead up to Christmas.

Last year, 25 per cent of the 90 tonnes of food collected by North Liverpool Foodbank was donated on matchdays by Everton and Liverpool supporters through the Fans Supporting Foodbanks initiative.

“It saddens me that a lot of people, especially kids, are struggling for food,” said Iwobi.

“People are working hard but they don’t make enough to take care of their own families so any little thing where we can help, it’s a pleasure. For us to see it with our own eyes is even better and hopefully we can raise awareness and help more people.”

The Club’s support was matched by a visit in the same week from Liverpool FC player Trent Alexander-Arnold, who also donated food and met with staff and volunteers to find out more about the centre’s important work.

Fans Supporting Foodbanks was set up by local Everton and Liverpool supporter groups in conjunction with the North Liverpool Foodbank, Anfield Breckside Community Centre, Unite in the Community and the Trussell Trust, to help combat food poverty. It has received the backing of other clubs and fan groups across the country.

Kevin Peacock, Chief Executive at St Andrew’s Community Network, the organising body for North Liverpool Foodbank, shared the startling figure that last year the 11,000 people were helped by the centre – about 40 per cent of whom were children.

Mr Peacock said: “The work of the Fans Supporting Foodbanks is really important to us. It makes up 25 per cent of all the food that’s donated to us and we give that food as emergency food parcels to people who need it.

“The more the football clubs are involved, the more that the public face of football can see the issue and start calling it out, the better for us really. The generosity of Liverpool people never fails to blow me away. Whether it’s at a supermarket or a football match people are basically saying you know, anything I can do, I will do.”

Iwobi added: “It shows that football fans don’t just come for the football but they’re out to help people that are in need as well. The fact that it’s 25 per cent is very high. Hopefully, we can increase that and make it better but it’s great that Liverpool and Everton supporters are able to help.”

Ahead of Wednesday’s derby at Anfield, people can drop off their donations three hours before kick-off and up to 15 minutes after kick-off at three locations:

To donate at Everton home matches:

The Fans Supporting Foodbanks donation van will be on-site at Goodison Park adjacent to the FanZone on Goodison Road in the build-up to every home match. Supporters attending the game can drop off any non-perishable food items right up until kick-off. Fans can also donate at: