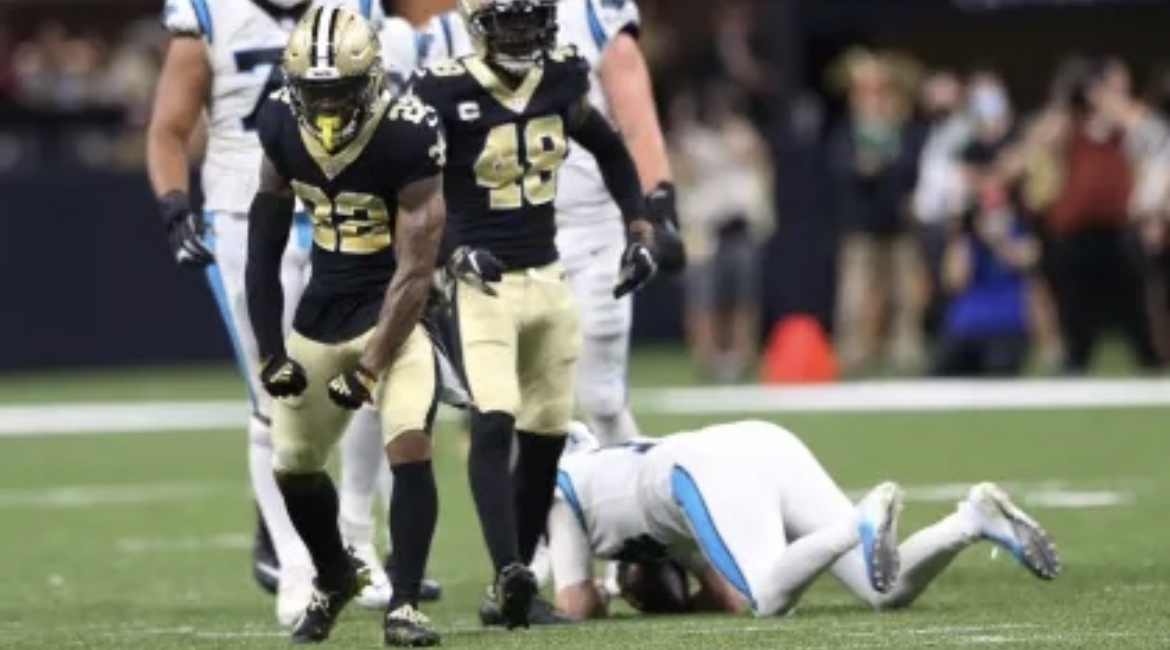 The Carolina Panthers limped into Caesars Superdome beleaguered with on-field and off-field issues. Quarterback carousels, a COVID surge, and a coaching staff on the hot seat – well, warm at least. Having lost the last five games, the Panthers could only hope to play spoiler and produce tangible evidence that head coach Matt Rhule’s process is “1000% working” as he told media following the team’s blowout lost to Tampa Bay last week.

Rhule announced on Wednesday that Sam Darnold would regain his starting role down in New Orleans in his second week back after a stint on injured reserve. The fourth-year quarterback started the game a perfect 9-for-9 en route to the Panthers scoring a field goal and a rushing touchdown by rookie Chuba Hubbard on their first two possessions. After drives of 61 and 81 yards, the offense sputtered netting a total of 2 yards on their next five possessions. Meanwhile the Saints connected on field foals of 41, 27, and 41 to trim Carolina’s lead to 10-9 going into halftime. The second field goal came courtesy of a strip sack when PJ Williams placed a hard hit on Darnold. The ball was recovered and advanced to Carolina’s 13-yard line by defensive end Marcus Davenport.

Carolina went three-and-out on both of their third quarter possessions while Saints kicker Brett Maher booted a 33-yard field goal for the game’s only third-quarter points and New Orleans’ first lead of the day.  The Panthers opened the fourth quarter with a missed 47 yard field goal by Lirim Hajrullahu. The ball sailed wide right and the Saints responded on the following drive with a 12 yard touchdown reception by running back Alvin Kamara – the team’s first in the last eleven quarters.  A missed extra point attempt left the score 18-10 in favor of the Saints with 7:49 remaining in the game. The Panthers’ struggle to move the ball continued with Darnold sacked twice on the final drive. After Darnold was sacked by Saints defensive end Cam Jordan with 1:09 left to play, he was intercepted by PJ Williams to end the Panthers’ hopes of snapping their current losing streak. The final score of 18-10 sends Carolina back home with their sixth straight win and keeps the Saints’ playoff hopes alive. Cam Newton entered the game with 13:36 to play in the second quarter. After a rush for 5 yards, he was back on the sideline as Darnold played the remainder of the game. Darnold finished 17-of-26 for 132 yards, one interception and no touchdowns while being sacked seven times. Taysom Hill finished 17-of-28 for 222 yards, one touchdown, and no interceptions. Hubbard was the game’s leading rusher finishing with 55 yards and a touchdown on seventeen carries. His 5th rushing TD of the season is the most by a Panthers rookie running back since Jonathan Stewart. The Saints Marquez Callaway led all receivers with six catches for 97 yards.

The loss drops the Panthers to 5-12 while the Saints improved to 8-8. Carolina closes out the season at Tampa Bay.