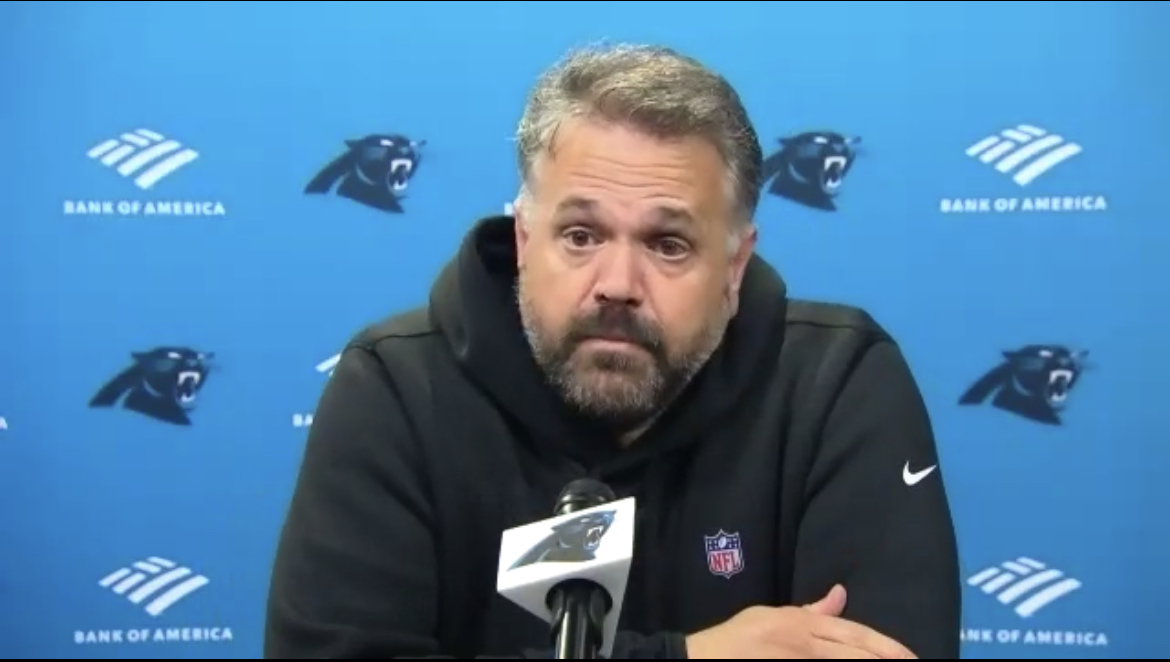 Although the playoffs were a moot point several weeks ago for the Carolina Panthers, there’s quite a bit to play for. Sure, they picked up quarterback Sam Darnold’s fifth year option before he ever took a snap in a Panthers uniform – locking themselves in for next season. However, the Darnold experience hasn’t been all that great and it is quite possible that the front office is hoping to attract a trading parter for the former third overall pick of the 2018 NFL Draft. After starting 3-0, Darnold has been a turnover machine racking up 10 interceptions in his last six starts including three-INT games against the Philadelphia Eagles and the New England Patriots before heading to injured reserve with a cracked shoulder blade. He retuned last week in the Panthers’ 32-6 blowout loss to the Tampa Bay Buccaneers and will start against the New Orleans Saints today. Head coach Matt Rhule is hoping to regain some of the magic from the first three weeks of the season. “I want to see him play the way he played in the first ball game (against the Saints),” said Rhule. The second year head coach says he wants to see on-time, aggressive throws – but within reason. “I’d like to see him play within the system. I’d like to see him be aggressive but not have a catastrophic mistake of the, ‘Hey, let me turn and throw the ball up in the air and see if something good happens.'” Perhaps if they can’t find a trade partner, a solid last two weeks could temper a bit of the buyer’s remorse the front office is feeling.

With Darnold out, Carolina circled the wagons and signed Cam Newton for the remainder of the year. Although Superman’s return provided storybook headlines, the 2015 NFL MVP’s second stint has been less that stellar. After a win over the Arizona Cardinals in his first game back – a mere three days after signing – Newton took over the starting job and the Panthers have gone 0-5. Several things have factored into those losses, but as well all know, the quarterback gets the praise  when winning and the criticism when losing. If Newton sees action in these final games, he’s basically playing for his next contract. Other players slated to become free agents following the season include cornerbacks Donte Jackson and Stephon Gilmore, outside linebacker Haason Reddick, center Matt Paradis, and linebacker Frankie Luvu. Jackson and Paradis are on season-ending injured reserve while Gilmore will miss Sunday’s game with a groin injury.

As the clock ticked down on 2021, an article in The Athletic revealed that Carolina’s owner David Tepper is reportedly “embarrassed” that he made Rhule one of the highest paid coaches in the NFL. In the second year of a seven-year contract, Rhule sits at 10-21. More glaring is the inability to adequately address the quarterback position. The team moved on from Teddy Bridgewater one season into a three-year $63 million deal. As part of the deal with the Denver Broncos, the Panthers were on the hook to pay most of Bridgewater’s salary. They traded their 2021 sixth round pick and their second- and fourth-round picks of the 2022 draft to the Jets for Darnold; in addition to picking up his fifth-year option and $18.9 million in guaranteed money for 2022. With Darnold hurt, they signed Newton to a one-year deal worth as much as $10 million. With only one pick in the first three rounds of the draft and sorely in need of a resolution at what is arguably the most important position on the field, the Panthers find themselves between a rock and a hard place – particularly Rhule. The team parted ways with second year Offensive Coordinator Joe Brady during the bye week and there are more staff changes on the way as the Panthers limp to their fourth straight losing season.

Citing over 20 anonymous sources comprised of players, staffers, and scouts, the Athletic article exposed the feelings that Rhule is simply not cut out for football at the NFL level. The article attacked Rhule’s penchant to sign his former college players and coaches and his employment of college-type punitive conditioning – DBO sign anyone? When asked about the article later the same day that it was published, Rhule brushed it off saying that he doesn’t respond to anonymous sources and that there is no tension in the locker room. One wonders if that statement will remain true should the Panthers lose these final two games.