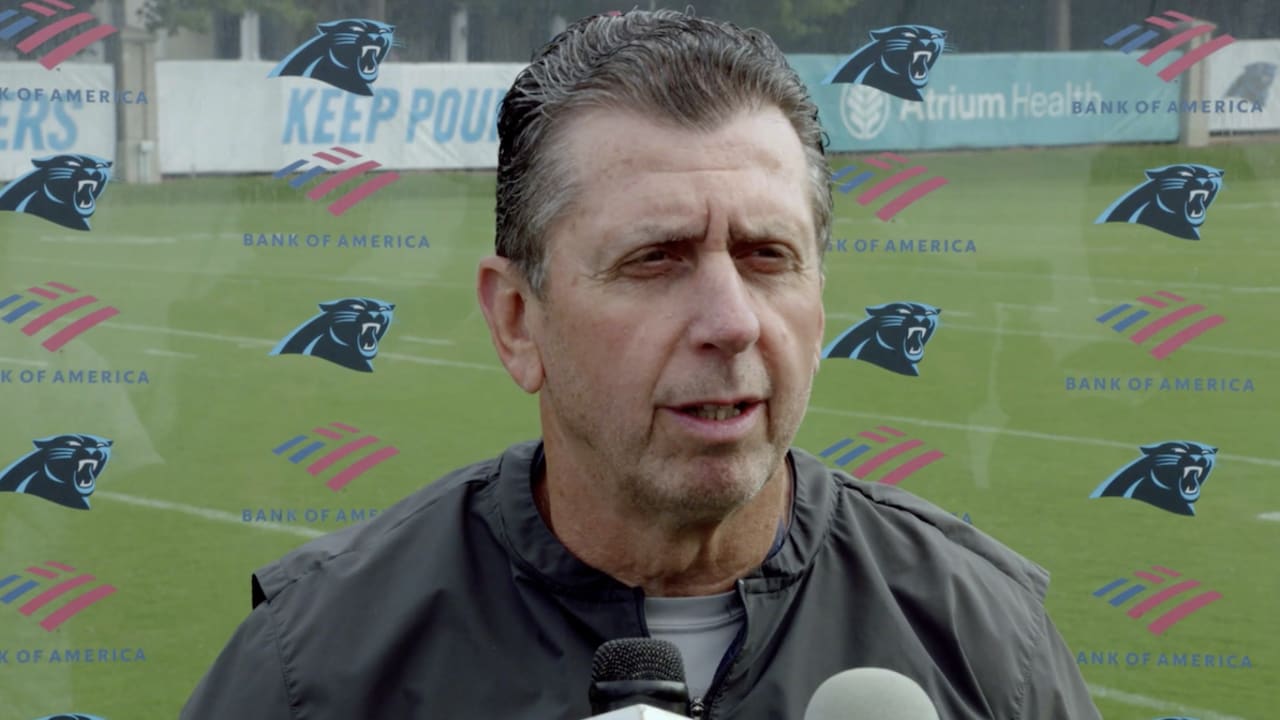 On Wednesday, Carolina Panthers defensive coordinator Phil Snow met with media ahead of practice.  During the session, Snow hammered home the mantra of the team’s defense going into his second season: bigger and faster.  While COVID-19 took away the benefit of offseason work last year, Snow is having fun experimenting during OTAs.

“We may do some things differently than we did a year ago, and then some things that are the same.  My job is to maximize the players on the field – what they can and can’t do.  So we’ve added some stuff, we’ve thrown some stuff out, and that’s the fun part of OTAs.  We’re trying some things that we’re looking at to see if we’re gonna use in the Fall, so this is a fun time.”

Last season, then-rookie Jeremy Chinn was used in a “front to back” capacity; Snow plans to flip that while taking advantage of Chinn’s versatility.  “To me, if you don’t utilize Jeremy in a number of different ways, then you’re not utilizing the player.  So, we won’t pigeon-hole him into one position.  We can maximize him by doing a lot of different things with him.”  Also, as opposed to being in a room by himself – save Al Holcomb – like last season, Chinn is now in the safety room.

Another player that has a unique skillset is Hasson Reddick, a free agency pickup.  Reddick played for Snow and head coach Matt Rhule at Temple where he came to campus as a cornerback before moving to linebacker, and eventually, defensive end.  “He’s another player that can do a lot of things so he’s another piece of the puzzle that’s fun to play with.  We’ve got three of four guys like that on our defense.”  That versatility will give opposing offenses headaches due to the ability to play different styles of defense with one personnel group.  “It gives the offense a lot of problems, because when you bring in a personnel group, they know what front and coverages you’re in.  But if you can play one group and do a number of different things, it gives you a huge advantage.”

That kind of defensive diversity can be a double edged sword as Snow mentions that you don’t want to “have too much”.  He states, “It’s a lot of fun but I also have to be smart that I don’t have too much; that we don’t burden them with assignments so that they can play really fast.  So that’s kinda the Catch-22 with it.”

Snow further explains that with the way the running game is being played, you need to big inside.  It’s something he feels the Panthers are equipped for with DaQuan Jones, Derrick Brown and Bravvion Roy on the interior.  “We’re big inside so the littler guys on the edges can play – (Brian) Burns, (Hasson) Reddick – those guys can be really effective out there and we’ve added some size.”  He notes that he asked linebacker Shaq Thompson to put on some weight and he has done just that.  The seventh-year player has added roughly 10 pounds and currently weighs in at 235-237.  Burns has also added muscle to his physique even though offseason surgery has limited his ability to hit the weights.  He’s currently weighing in around 250 and his body will continue to grow according to Snow.  “You know Burns was younger last year than all the rookies we brought in so his body is starting to grow a little bit.  So I think you’re gonna see him 5-7 pounds heavier this year and stay there, right and heck, the next year.  Cause, he’s only 22 years old; he’s young.  You’ll see him get bigger, I think, over the next 2-3 years.”

With all those weapons at his disposal, Snow finds himself in a territory offensive coordinator Joe Brady was familiar with last season.  “My biggest concern is making sure I get all these guys on the field to make plays, right.  There’s a variety of different groups I could play, but you’ve gotta be smart that we utilize everybody the right amount of snaps.”  That sounds like a good problem to have; especially for a unit that ranked near the bottom of almost every defensive category last season.