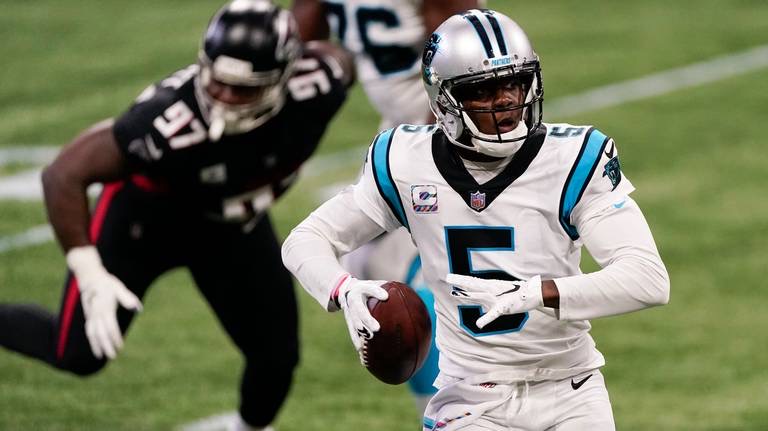 Sure the Carolina Panthers are on a 2-game win streak but they took nothing for granted when traveling down I-85 to take on winless divisional opponent Atlanta Falcons.  Panthers quarterback likened the Falcons to the Carolina Panthers a few weeks back  – a team hungry for its first win.  The Falcons will have to wait at least another week to satiate that hunger as the Panthers left Mercedes-Benz Stadium with a 23-16 win.

The Falcons struck first with running back Todd Gurley having his way with the Panthers defense on a 35-yard touchdown run to open up the game.  Gurley’s score would be the only points the Falcons could muster for the entire first half while Carolina scored on each of its remaining possessions.  After two field goals from Joey Slye, defensive end Brian Burns sacked Atlanta quarterback Matt Ryan and forced a fumble.  Safety Juston Burris was unable to secure the ball on what would have been a sure scoop and score.  Burns left the game with a concussion after the next play.  The Panthers defense held and the Falcons was forced to punt.

Trailing 6-0, Panthers receiver DJ Moore turned on the burners as he got a step on Atlanta defender Isaiah Oliver at the line of scrimmage and left him in his wake on a 57-yard touchdown run down the sideline.  Running back Mike Davis capped off the scoring for the first half with a 3-yard touchdown to put the Panthers up 20-7 at the half.

The Falcons dominated time of possession in the third quarter, with Carolina punting on its only possession.  Ryan and Falcons receiver Calvin Ridley appeared to get into a groove but just could not find the end zone and Atlanta found themselves settling for field goals the rest of the way.  Kicker Younghoe Koo made field goals of 46, 31, and 54 yards to round out the Falcons scoring on the afternoon.  The most promising Atlanta drive of the day was quashed by Panthers safety Juston Burris’ end zone interception with 8:49 left in the fourth quarter.

Often the unsung heroes, the Panthers offensive line allowed no sacks for the second week in a row.  Davis rushed for 89 yards on 16 carries and added a receiving touchdown. Robby Anderson led the Panthers receivers with eight catches for 112 yards while DJ Moore added four catches for 93 yards and a touchdown.  Bridgewater threw for 313 yards and two touchdowns en route to a quarterback rating of 116.2 as the Panthers won in Atlanta for the first time since 2014.  The Falcons fall to 0-5 while the Panthers move into a tie with Tampa Bay for first place in the NFC South.  Carolina hosts the Chicago Bears next Sunday.