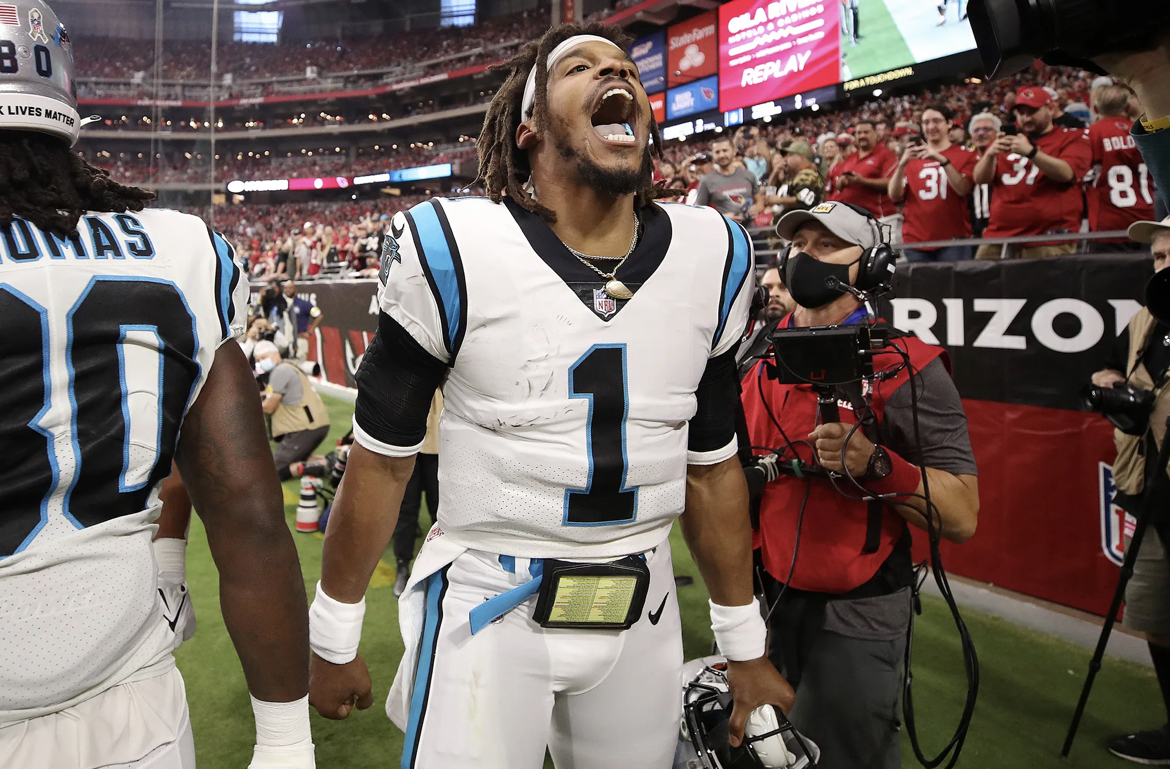 The Carolina Panthers had scored one touchdown in their last 35 possessions when the offense took the field on Sunday against the one-loss Arizona Cardinals. Quarterback Cam Newton accounted for two touchdowns on his first two touches since rejoining the team just this past Thursday. With starter Sam Darnold out and backup PJ Walker slated to start the game, the expectation was that Newton would only see limited action with such a short time to learn the playbook and get his football legs back under him.

Panthers fans felt like the past few days were a fairytale and the story continued in State Farm Stadium. Defense played lights out, as they have all year, and a strip sack by defensive end Haason Reddick gave Carolina the ball at the Arizona 18. Newton entered the game on 1st-and-goal from the 2-yard line and rushed for the game’s first touchdown less that four minutes into the game. That touchdown moved Newton into second place in Panthers history in scrimmage touchdowns with 59. For some reason, the Cardinals decided to go for it on fourth down while in their own territory against the #2 defense in the NFL. Nevertheless, they turned the ball over on downs and four plays later, Newton connected with Robby Anderson for a 2-yard touchdown giving the Panthers a 14-0 lead with 8:39 left to play in the first quarter.

With starting quarterback Kyler Murray out, Colt McCoy struggled. Donte Jackson intercepted McCoy and returned it to the Arizona 34 yard line. Kicker Zane Gonzalez, the lone spot for Carolina’s offense the last 5 weeks or so, connected on a 44-yard field goal to push the Carolina lead to 17-0 with 1:00 left in the first quarter. The 17 points is Carolina’s most in a first quarter since Week 14 of 2015 regular season. Gonzalez connected on two more field goals of 48 and 49 yards to send the Panthers to halftime with a 23-0 lead. Aside from PJ Walker being intercepted by Jalen Thompson, Carolina scored on each of their possessions in the first half.

The second half has been a challenge for Carolina this season and despite punting for the first time of the day on their opening drive, that was not the case today. The Cardinals finally cracked the scoreboard with a 47 yard field goal with a little over 10 minutes to play in the third quarter but Panthers running back Chuba Hubbard scored on a 5-yard walk-in touchdown and Carolina executed a successful two-point conversion to push the lead to 31-3. The only other points the Cardinals could muster came on an 11-yard touchdown run by running back James Conner with 9:19 left to play in the fourth quarter. A 27 yard field goal by Gonzalez closed out the scoring and the Panthers handed the Cardinals a 34-10 beating in only their second loss of the season.

Although this was arguably the Panthers’ most complete game of the season, the 115 penalty yards were definitely a sore spot. McCoy, starting in place of the injured Murray, left the game with 4:33 left in the third quarter with a chest injury after a sack by Shaq Thompson and Chris Streveler finished the game at quarterback for Arizona. The Panthers finished with four sacks, one interception, and one forced fumble while the offensive line managed to keep both Walker and Newton from getting sacked. Christian McCaffrey was the game’s leading rusher (95) and receiver (66) in his second game back from a hamstring injury suffered in Week Three. Anderson, who has endured his own struggles in the past few weeks, had four catches for 37 yards and a touchdown. Walker finished 22-of-29 for 167 yards and one interception with a passer rating of 74.9. McCoy finished 11-of-20 for 107 yards, one interception and a passer rating of 49.4. Newton’s 8 passing yards, one touchdown pass, and one rushing touchdown were more than enough. The Panthers were the only NFC South to win today after the Saints, Falcons, and Buccaneers all fell in their early afternoon matchups.