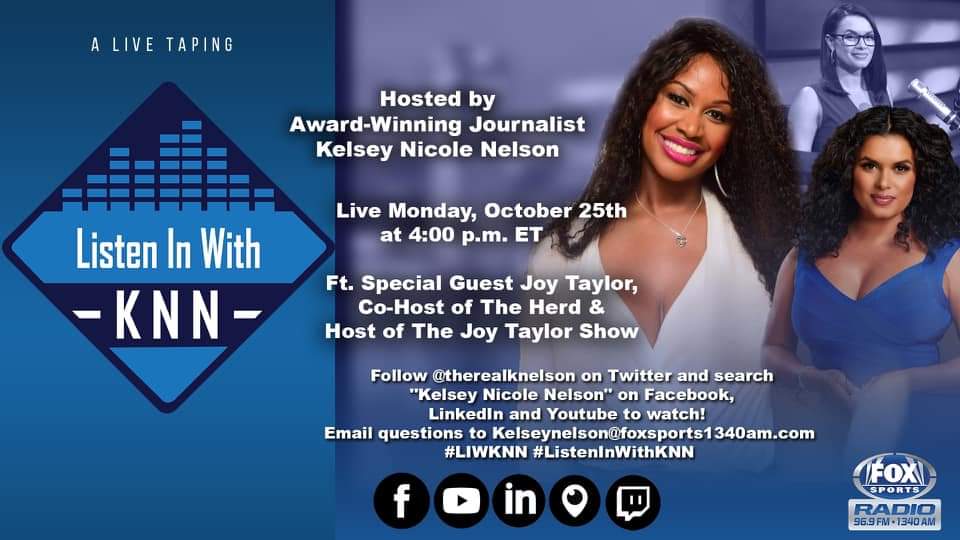 On this special episode of “Listen In With KNN” presented by Fox Sports 1340AM/96.9 FM, executive producer and award-winning broadcast host Kelsey Nicole Nelson welcomed special guest Joy Taylor, Co-host of “The Herd” with Colin Cowherd on FS1 & Host of “The Joy Taylor Show” to the podcast.

Taylor joined the podcast to discuss some of the top football storylines, and her journey through broadcasting which includes her new radio show “The Joy Taylor Show,” on FOX Sports Radio. This year she’s also featured on the Amazon Prime video broadcast team for “Thursday Night Football’ which also broadcasts on Twitch. Prior to joining “The Herd” Joy was best known for being the moderator on the FS1 studio show “Undisputed” with Skip Bayless and Shannon Sharpe. She is also the sister of former NFL defensive end Jason Taylor.

The Pittsburgh native was asked about her thoughts about head coach Mike Tomlin of the Pittsburgh Steelers and the sudden rumors of Tomlin heading to the University of Southern California and filling that newly vacant head coaching position. These rumors began after former USC quarterback Carson Palmer on “The Dan Patrick Show” raised it. Taylor quickly shut those rumors down saying, “I don’t see him leaving Pittsburgh.” Elaborating on Taylor said it does make for a good story because the Ben Roethlisberger era is ending. Taylor added, “The Steelers have had three head coaches in the history of the franchise. They are not a team that moves on from head coaches.” Taylor did add that she actually thinks that next season Aaron Rodgers coming to Pittsburgh is a more likely outcome.

Staying on the topic of Pittsburgh, Nelson asked Taylor about her childhood growing up there and what the city means to her today. Taylor immediately exclaimed, “I love Pittsburgh.” She described it as a place that is very down to earth and she feels Pittsburgh carries a certain kind of toughness about it. “It’s a place I will always have love for, being born and raised there,” said Taylor. Taylor described being raised by crazed female sports fans. “That’s where I get my sports roots from, I never really grew up with the notion that girls aren’t supposed to be into sports,” added Taylor. She has a lot of respect for the organization, the city and just the people there.

Taylor graduated from Barry University in Miami, Fla. with a Bachelor of Arts degree in broadcast communications in 2009. Today, Taylor has a scholarship that is given to communication majors there who will be future broadcasters and/or journalists. Taylor wanted to improve the lack of diversity in the business at entry level. Taylor said, “I love Barry University and the city of Miami. I say that I was born and raised in Pittsburgh but I became a woman in Miami.” She views Miami as her second home and credits Barry University as a great place to have gotten her education from and start in the business of broadcasting.

Speaking on her journey in broadcasting, Taylor mentioned  how her path was actually untraditional. Taylor mentioned with Barry University, even as a small private university being in a big market in Miami, it helped her get her first job. “Barry really prepared me for the future and it was a special thing for me to give back to the university,” said Taylor.

Speaking to her recent success, Nelson was able to ask Taylor about her newly launched show,  “The Joy Taylor Show,” airing on FOX Sports Radio. “It’s been really huge for me, I wasn’t sure what the reaction to the announcement of the show was going to be but it really got a lot of love,” said Taylor. Taylor explained that being able to get the show was a big moment for her in her career. Taylor shared being able to host the show herself was big for her as well. “I wanted to be able to stand on my own,” added Taylor. Taylor was adamant about showing others what she was capable of doing on her own and was just glad that FOX Sports was confident enough in her to give her the opportunity. She added the show was a good opportunity to give others’ platforms that she thought was doing great work as well in the industry. “Obviously there are a lot of women in the business who don’t always get the opportunity to give their opinions and that’s what I’m doing on the show…,” said Taylor. “We always have women on the show and I’m hoping that we are introducing some amazing women in the business to new audiences… that’s important to me.” She mentioned of course that she wants to do an entertaining and informative show. Taylor credited Colin Cowherd, Skip Bayless and Shannon Sharpe for supporting her.

Transitioning to the full slate of NFL games, Taylor was able to discuss some of the top football storylines. Speaking of the latest NFL games, Nelson began asking Taylor about the current state of the Kansas City Chiefs. Taylor said, “Yeah it’s time to hit the panic button, they are not playing well. The season is not over yet but it’s looking bleak for the Chiefs.” Another team that had people reeling was the Baltimore Ravens. Sharing her thoughts on the Cincinnati Bengals win over Baltimore, Taylor thinks the Bengals are “fierce.” “I love Joe Burrow, I’m a massive Joe Burrow fan… they are putting it all together, Cincinnati is for real,” said Taylor. As far as the NFC East and the local Washington Football Team, Taylor feels that it’s not over in the division for Washington but she feels they are going to have to compete with Dallas to become back to back division champs.

When she’s not covering the latest games, Taylor enjoys giving back to the community. Through her recently formed Joy Taylor foundation, Taylors nonprofit organization works to serve the homeless, assist survivors of domestic violence and promote education and youth empowerment in the communities of Los Angeles, Miami, Pittsburgh and New York City. Taylor said, “I’m very passionate about giving back to the community.” Taylor says this was a great chance to use her platforms to promote these things and to make a more organized effort. Taylor is a domestic violence survivor.

To catch Taylor, tune in to “The Joy Taylor Show” which airs every Saturday on Fox Sports Radio from 2 to 4 P.M. ET. and “The Herd” on weekdays from 12 noon to 3 P.M. ET on FS1. You can also follow Joy Taylor on social media via: Instagram, Twitter and Facebook.