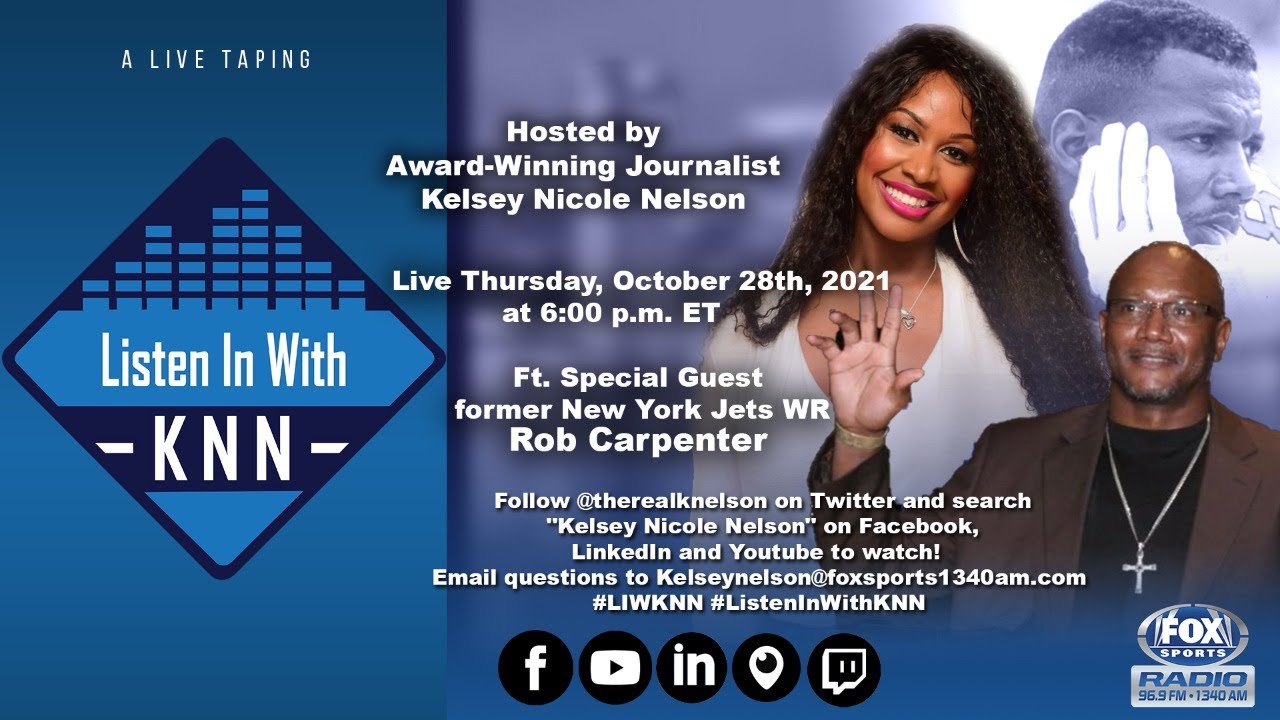 On one of the latest editions of “Listen In With KNN” sports talk radio/podcast show presented by FOX Sports Radio 1340AM/96.9 FM, executive producer and host Kelsey Nicole Nelson welcomed one of the greatest wide receivers out of Syracuse University and former New York Jets, New England Patriots, and Philadelphia Eagles WR, Rob Carpenter, to the show.

Born and raised in Amityville, NY, Carpenter has always been a Jets fan. “I’ve been a Jets fan since I can remember. My first jersey was a Joe Namath jersey. My dad bought it for me for Christmas when I was six or seven years old,” said Carpenter. Interestingly, Carpenter lived about 10 minutes away from the Jets’ practice facility in Hofstra growing up.

Sports were the way Carpenter coped with the difficult surroundings he lived in. “I was just fortunate enough to be in sports.” The sports he and his family always had on the television were baseball, basketball, and football. “I was more into basketball than I was into football, honestly,” said Carpenter.

Carpenter opened up about an experience he had in his neighborhood, one that has become very frequent in today’s society; this was a time when he was pulled over by an officer during the 1980s. “My neighborhood was one of the ten most drug-run spots in the country…I was basically just pulled over because I was a black kid driving down the street, you know, that was it.”

This experience taught Carpenter lessons that he has passed on to his children. It’s a lesson that is true for all minorities in the United States. “Everything is not for everybody…we teach our kids now, as Black people in this country, and I told my kids this, you have to be aware of your surroundings…and not everyone is going to be treated equally,” said Carpenter.

Carpenter is happy with the slow improvements in our society to be more inclusive, but still wants more progress for all people.

Speaking about change, Carpenter was proud that his Jets team has become one of the leaders in the NFL for trailblazing women,. Some of the trailblazing women such as Connie Carberg and Collette V. Smith have been featured on “Listen In With KNN” recently.

Going back to his football beginnings, Carpenter originally went to Notre Dame but made the choice to transfer to Syracuse and become an Orangeman for his sophomore and junior year. “Syracuse football was like Jets…me and my dad would get up [every Sunday] and watch the Syracuse games before the NFL games so Syracuse was always on the back of my mind…”

Carpenter continued on to talk about the camaraderie that he and all the athletes had at Syracuse. “When I decided to transfer there, it was like I was home already…it was one of the greatest times of my life,” said Carpenter. He keeps in contact still with some of his teammates aka his boys today as they recap many fond memories.

Looking back to how Carpenter made the Syracuse history books, Carpenter ranks third on the all-time receiving yards list and had 52 catches in his junior year, one shy of Rob Moore’s school record.

Nelson and Carpenter also discussed his time with the New York Jets and how it had a special connection for him. “It meant more to me to be there for the people who were behind me, my family, my friends…I chose to be in New York,” said Carpenter.

Loyal listener, Antwon Smith, asked for Carpenter’s thoughts on the “fortune” the Jets need going forward. “I’m a realist so I knew there wasn’t going to be much happening this season with them. You have a rookie quarterback, a rookie head coach, a rookie offensive coordinator…one thing I was looking forward to was seeing progress every week,” said Carpenter.

Current Jets rookie QB, Zach Wilson, suffered a PCL (posterior cruciate ligament) sprain in the team’s Week 7 loss against the New England Patriots, who also have a rookie QB, Mac Jones. Since then, the Jets traded with the Philadelphia Eagles to acquire veteran QB, Joe Flacco. Wilson was showing promise with new reads and slowing the pace, but will have to heal before he can return and continue to help the Jets with the rebuild