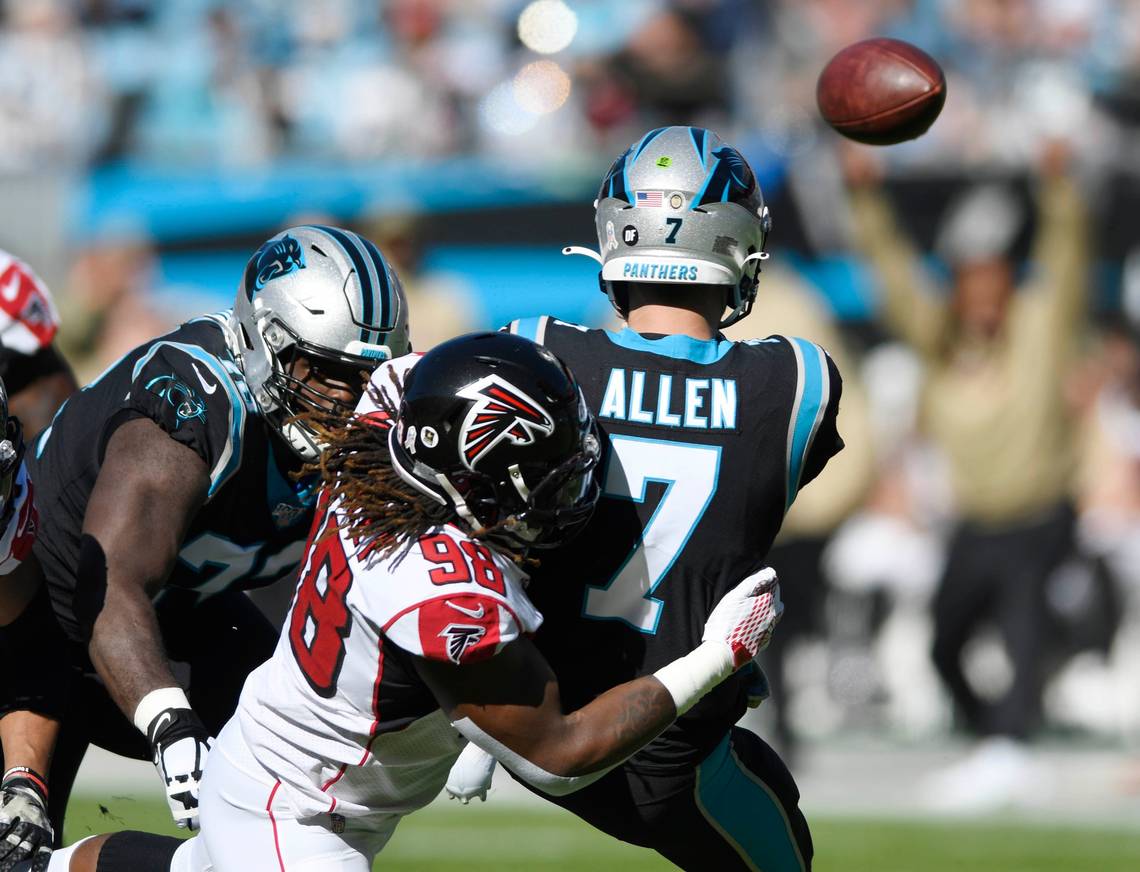 This one feels different. One week removed from a tough loss at Green Bay, the Carolina Panthers were eager to return to their home field and warmer weather. However, the Panthers were ice cold in their first meeting this season against NFC South foe Atlanta Falcons. After being shut out in the first half, the Panthers did not get on the board until 13:00 remaining the fourth quarter when kicker Joey Slye connected on a 31-yard field goal. Panthers quarterback Kyle Allen thew three first half interceptions – two of those in the red zone in what tight end Greg Olsen called “a comedy of terrible football”.

The Falcons drew blood early when kicker Younghoe Koo connected on a38-yard field goal to cap the Falcons’ opening drive. Conversely, Allen capped the Panthers’ opening drive with an interception at the Carolina 25-yard line. Later in the first quarter, former Panther Kenjon Barner returned a Mike Palardy punt 78 yards for a touchdown to give the Falcons a 10-0 lead after one quarter.

The second quarter was not much better as the Panthers struggled to only 143 net yards in the first quarter, with running back Christian McCaffrey accounted for 73 of those yards. Things weren’t much better on the defensive side of the ball as the Falcons moved the chains at will. Facing 3rd and 16, Falcons quarterback Matt Ryan connected with Julio Jones on a 48 yard reception as Jones was covered by Carolina linebacker Luke Kuechly.

“I was in a good spot,” said Kuechly when speaking with media following the game. Was running down the field. You can see it in his eyes when he’s going to get the ball. My approach on that play was to play his hands, because when his hands come up, the ball is coming. As his hands come up, I try to put my hand in there to try to deflect the ball. Great throw, great catch – but looking back on it, as he goes to make the adjustment for the ball, I’ve got to get my head back so I can see the ball. He’s a great player, Matt (Ryan) is a great quarterback, but I have to make that play.”

To add insult to injury, defensive end Mario Addison was flagged for roughing the passer, putting the ball on the 2-yard line at 1st-and-goal. Qadree Ollison punched it in for the touchdown and gave the Falcons a 20-0 lead. The Panthers ended the half with Allen’s third interception of the day as Ricardo Allen picked off the quarterback at the Atlanta 3-yard line.

The second half was more of the same as the offense just could not seem to find its groove. Pass protection was abysmal as the Falcons tallied five sacks and Allen threw his fourth interception of the day. Gashed by the run in the past couple of weeks, the Panthers held the Falcons to only 54 yards on the ground. However, the Falcons’ aerial assault was too much to overcome. Ryan was able to connect on ten pass plays that totaled 232 yards; three of those passes were for over 30 yards each. Ryan finished with 311 yards on 21-of-31 passing for one touchdown and a quarterback rating of 111.1. Calvin Ridley led the Falcons in receiving yards with 8 catches on 8 targets for a total of 143 yards and a touchdown. Julio Jones added six catches for 91 yards. Desmond Trufant, Damontae Kazee, Ricardo Allen, and De’Vondre Campbell all tallied one interception each.

Carolina’s human joystick Christian McCaffrey was kept out of the end zone but catch eleven passes for 121 yards and picked up 70 yards rushing in the losing effort. Allen finished with 325 yards on 31-of-50 passing, four interceptions, and no touchdowns.

Things don’t get much easier for the Panthers as they drop to .500 on the season and travel south to face the New Orleans Saints. The Panthers drop to 1-2 in the division. The Falcons improve to 3-7 with an NFC South record of 2-0 having defeated the Saints last Sunday.