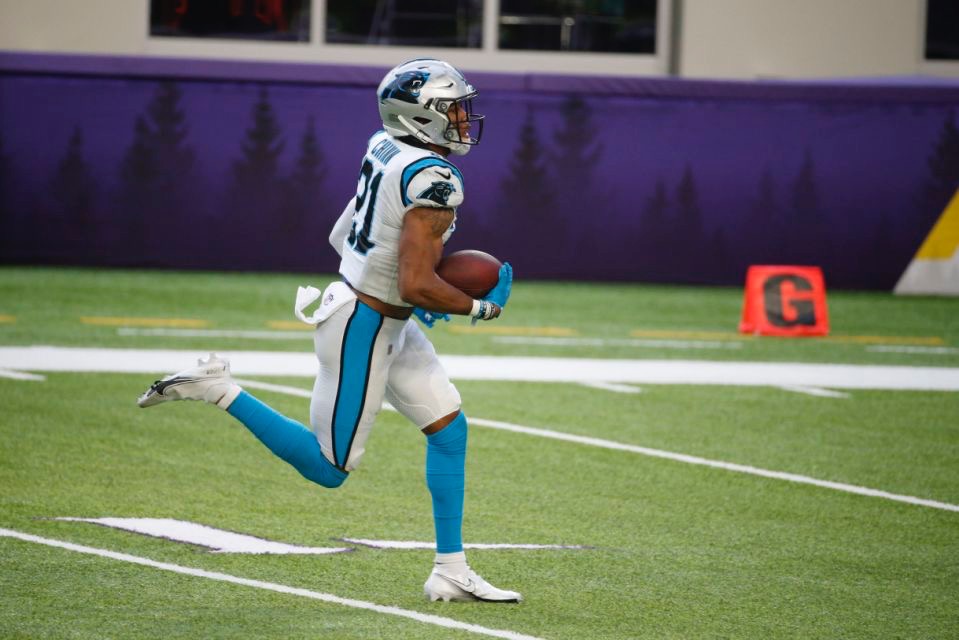 Both teams entered Sunday’s game with just four wins on the season; however, three of the Vikings’ four wins came within their division and the game held playoff indications.  The Vikings drew first blood on a 12 yard touchdown reception by Justin Jefferson and the Panthers put the clamps on…until the fourth quarter that is.

The Panthers offense simply couldn’t find its groove as quarterback Teddy Bridgewater threw a red zone interception; the team’s third in the last two games.  On the next possession, Bridgewater was able to connect with receiver Robby Anderson who ran into the end zone untouched for the 41-yard score – the Panthers lone offensive touchdown of the day.  The defense held the Vikings to a field goal to end the half and the Panthers went into halftime down 10-7 despite out gaining the Vikings in the first half.

The third quarter has been the Panthers Achille’s heel for most of the season; but not today. Jeremy Chinn arguably all but solidified his bid for NFL Defensive Rookie of the Year with two defensive touchdowns on Sunday…within ten seconds.  No type there; the rookie defensive joystick had two scoop and scores within ten seconds to open up the second half of the Carolina Panthers win over the Minnesota Vikings.  Chinn’s scores put the Panthers up 21-10 before the offense even touched the field.  In their lone offensive possession of the third quarter, the Panthers field goal attempt was blocked and the team headed into the fourth quarter with an 11-point lead.

For some reason, the Panthers abandoned the aggressive defensive play that had been so successful for them in the first three quarters of the game. The Panthers settled into “prevent defense” and the Vikings made them pay.  Kirk Cousins and the Vikings scored a field goal and a second Jefferson touchdown on their first two offensive possessions of the fourth quarter to decrease the lead to 3 with 5:31 left in the game.

The Panthers offensive woes continued but they caught a huge break when Chad Beebe muffed the punt and the Panthers Myles Hartsfield recovered the ball at the Vikings’ 9-yard line with 2:10 left to play in the game.  The Vikings had no timeouts left but the Panthers were unable to advance past the 3 yard line and settled for a field goal; pushing the lead to 6 but giving Minnesota the ball back with 1:51 left in the game.  The Vikings drove 75 yards and capped the drive – and the game – with a Beebe redemption touchdown.  After the blocked extra point was nullified by the Panthers safety Juston Burris’ offsides penalty, the second attempt by Dan Bailey was good and gave the Vikings the 1-point lead, good enough for the win.

Bridgewater finished 19-of-36 for 267 yards, one touchdown, and one interception.  Cousins finished with 34-of-45 for 307 yards and three touchdowns. Vikings star running back Dalvin Cook was held to 61 yards and no touchdowns.  The Panthers fall to 4-8 and will host the Broncos after the bye week.  The Vikings improve to 5-6 and play the Jaguars next week.