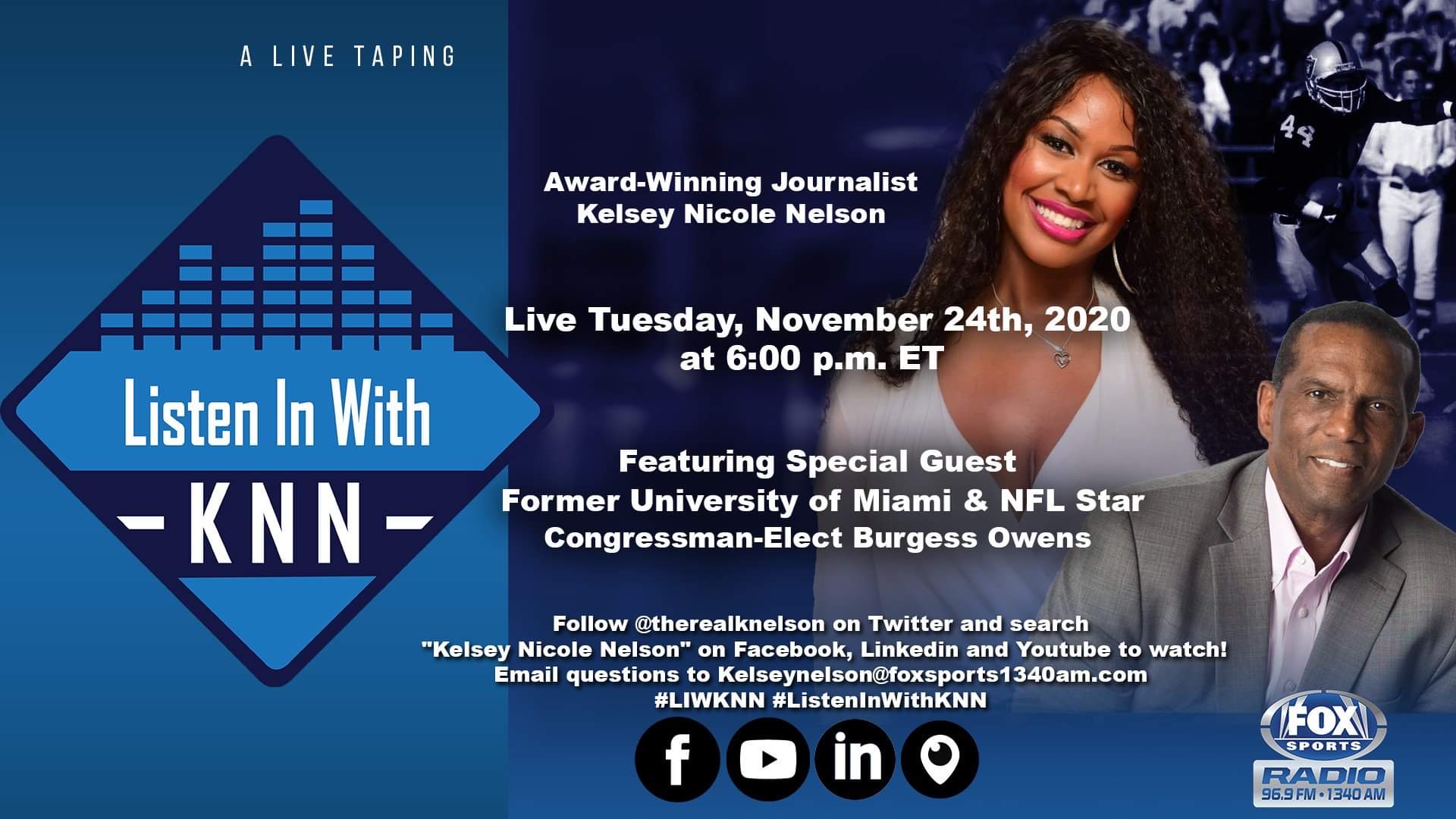 On the latest episode of Listen In With KNN on Fox Sports 1340AM, host Kelsey Nicole Nelson welcomed former University of Miami and NFL star and Congressman-Elect Burgess Owens to the show.

Speaking of his journey, he grew up in a Baptist home in Tallahassee Florida in the 1960’s during the Civil Rights era. His dad got his Ph.D at Ohio State in 1951 because he wasn’t allowed to get it in Texas due to segregation. Owens was taught that the American Dream was possible to anybody who worked hard for it.

“The generation that raised me was the greatest generation in our history. In the 40s, 50s and 60s, the Black community was the most competitive community in our country that led the growth of the middle class. We are the one place that every single generation looks to find its better self,” he said. “We have to make sure that’s been our legacy and I’m so thankful to have the history I’ve had.”

Owens was one of four players that integrated on the Rickards High School football team. After graduating from high school, he was the third Black student to get a scholarship to the University of Miami.

“The biggest part about our history and why we need to know it is because it allows us to be proud where we come from, appreciate who we are today and having a vision for the future,” Owens said.

He was selected by the New York Jets in the 1973 NFL Draft and spent his first seven seasons with the team until he got traded to the Oakland Raiders in 1980. While with the Raiders, then-owner Al Davis accepted anyone on the team no matter what reputation they had. As a result, they won Super Bowl 15 over the Philadelphia Eagles.

“The great thing about coming to that place is that once you got there, you knew this was it. We took pride in being part of that culture. It was a team of underdogs that will outwork and outbeat anyone that we played for. The only thing that we regret is as a team that year was we had nobody else to play (after the Super Bowl) and we had so much fun,” said Owens.

When he retired in 1982, he became interested in politics and acknowledged that he was a cocky liberal but developed into a conservative. Owens has been very critical of former San Francisco 49ers quarterback Colin Kaepernick when he started the protests during the National Anthem.

“Those young men that are making 50-100 million dollars a year are blessed and take advantage of it. Our flag is something we should all agree on. It represents a nation that’s done it better than any other nation in the history of mankind. We have freedom in this country because of the millions of people all across the board who lived and died so that we can do the things that we’re doing today,” he said. “What we’ve done together best is as a people.”

Owens was elected as a member from Utah’s fourth congressional district in the U.S. House of Representatives. Utah has 27,000 business owners and 93 percent of those are small business owners. He believes that Utah is a great place to live and hopes to represent the state well.

“What I love being in Utah is that the values I grew up with are the same values I’m fighting for and I’m thankful that my message resonated in this District. I hope to take the same experience I had with football to politics. My goal at the end of the day is we’re a country that looks at each other inside out not outside in,” Owens said. “Let’s be thankful for who we are and having the opportunity to live the American Dream by working out there, taking risks, failing and getting back up again.”