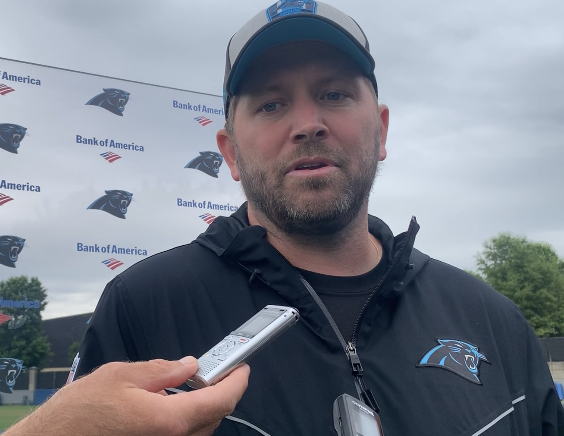 Carolina Panthers fans and foes were all glued to their computer screens and smartphones as the team streamed Cam Newton’s minicamp throws on Tuesday morning. Rumblings about the quarterback’s new mechanics had fans on the edge of their seats, eager for a look at the 2015 MVP.

Many of those watching were wondering just what they were looking for. While the changes were subtle, they will go a long way in helping Newton re-establish the dominance he displayed in the early part of last season. Although the second half of the season deteriorated along with the health of the signal-caller, the first eight games saw Newton on pace to surpass his 2015 MVP season.

“Well, I mean, if you go back and look at a lot of things that happened earlier in the year before he started having shoulder issues, you could see the improvement. You could see the footwork. You see the whole development of him.

“As the shoulder started to go, then you saw everything kind of just fall to the wayside.”

In case you were wondering what changes to look for in Tuesday’s livestream of Cam Newton’s minicamp throws, QB coach Scott Turner offered up a crash course after practice Wednesday. pic.twitter.com/RthdumTWDo

Turner added that everything from Newton’s rehabilitation process has been great. “He’s put a lot of work in post-having the procedure that he had on his shoulder. He’s put himself in a position to be as good as he can be,” said Turner. That’s welcome news for a team that saw their season spontaneously combust as its leader fought through shoulder pain for six games before the Panthers shut him down. It goes without saying that as Cam Newton goes, so goes the Panthers. On Thursday, Newton closed out minicamp by completing short and mid-range passes to moving receivers after starting minicamp off with 10-yard passes to stationary targets.