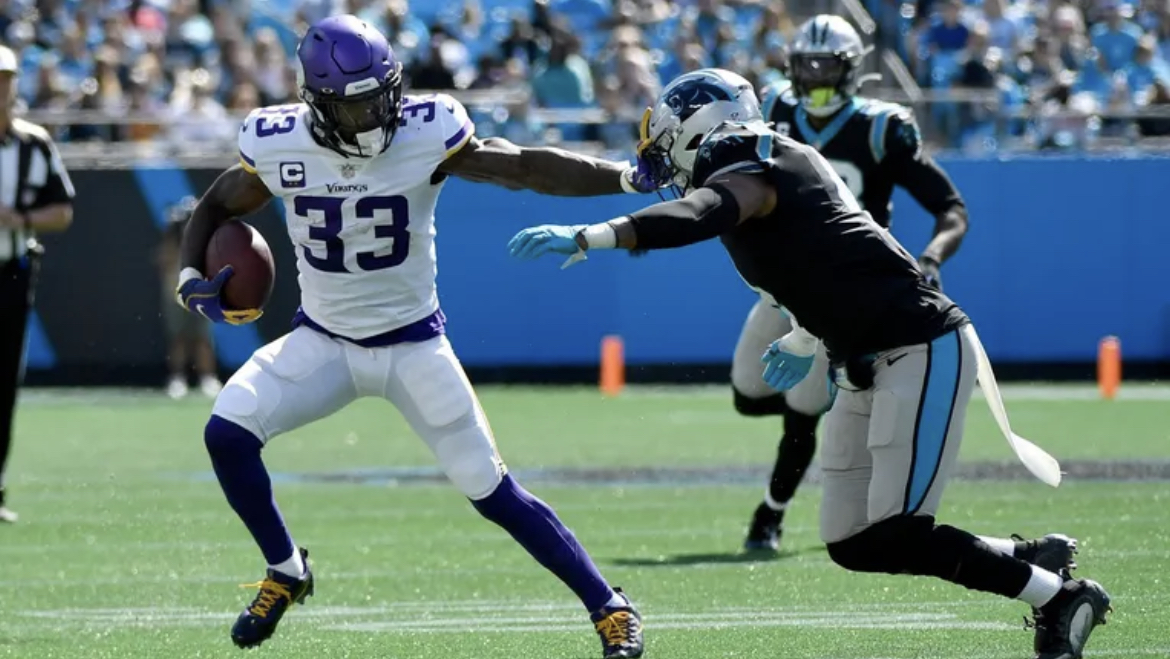 After five weeks, the Carolina Panthers sat at 3-2 for the third straight year – pretty jarring when you look at this season’s team versus the previous ones.  However, 3-2 is 3-2 and the Panthers were coming off of a bad home loss to the Philadelphia Eagles.  While the margin of defeat wasn’t that large, the way the game was lost made that particular game sting.  For the third straight game, the Panthers played poorly in the second half.  Enter the Minnesota Vikings – a team that has had its own struggles after halftime this season.

As a matter of fact, the Vikings came into the game averaging just over 3 points per game in the third quarter.  On Sunday, they scored 13.  You could tell that it would be a long game for the Panthers from the opening drive.  On the first play from scrimmage, Carolina quarterback Sam Darnold was intercepted by Bashaud Breeland.  He returned the interception the Panthers’ 22-yard line giving Kirk Cousins and the Vikings excellent field position just seconds into the game.  They settled for a 25-yard field goal by Greg Joseph.  The Panthers interrupted Minnesota’s next drive when AJ Bouye forced receiver Adam Thielen to fumble.  The ball was recovered by defensive end Haason Reddick and returned to the Minnesota 18-yard line.  With a short field, the Panthers scored their lone offensive touchdown of the half.  Rookie Shi Smith, active for the first time this season, recorded his first NFL reception for 16 yards and fellow rookie Chuba Hubbard rushed for a 2-yard touchdown to give the Panthers the early lead 7-3.

The Vikings kicked another short field goal to close out the first quarter scoring.  In the second quarter, Cousins connected with tight end Chris Herndon for an easy one yard touchdown to take a 2-point lead into halftime.  A big blow to Carolina – hit with the injury bug as of late – was when rookie Terrace Marshall, Jr left the game with a concussion after a nasty hit from safety Xavier Woods.  You could say that the Panthers final drive of the half was a sign of things to come.  Darnold called back-to-back timeouts, which caused a delay of game penalty.  The offense looked confused and discombobulated.

Enter the third quarter.  It appeared that maybe the Panthers’ fortune was reversed when linebacker Frankie Luvu blocked a punt, resulting in Kenny Robinson recovering and scoring the Panthers only other touchdown of the day.  However, that was as good as it would get – for the third quarter that is.  A couple of chunk plays were capped off with a 16 yard rushing touchdown by Dalvin Cook – giving Minnesota a one-point lead, 18-17.  The offensive woes continued when a fumble by DJ Moore was recovered at the CAR 39 yard line.  One thing the Vikings took advantage of today was good field position as a result of Carolina turnovers.  This time, it was Thielen with a 5-yard touchdown reception to increase the lead to eight, 25-17.  A 38-yard field goal in the fourth quarter made the game 28-17 with 10:15 left to play in the game.

A strip sack at the Carolina 38-yard line gave the Vikings the chance to increase their lead.  Instead, a 50-yard field goal attempt sailed wide right.  On the next drive, a 23-yard field goal by Zane Gonzalez brought the Panthers within  eight points with 4:41 left in the game.  The stage was set for Sam Darnold to orchestrate a monster drive  – and that, he did.  After a rough game that saw his rating dip into the teens, the USC product guided the offense 96 yards downfield; connecting on pass plays of 41 and 25 yards before hitting Robby Anderson for a 7 yard touchdown.  It was Anderson’s second catch of the day.  A successful two-point conversion tied the game 28-28 with 41 seconds left on the clock.  A missed 47 yard field goal by Joseph sent the game into overtime.

The Vikings won the toss and got the ball first in the overtime period and quickly marched down the field, ending the game with a deep 27-yard touchdown reception by K.J. Osborn to leave Bank of America with a 42-38 win and a .500 record.  The Panthers defense, ranked first in the league just a few short weeks ago, gave up 571 total net yards.  Cousins finished 33-of-48 for 373 yards, three touchdowns, and a rating of 112.6 while Darnold finished 17-of-41 for 207 yards, one touchdown, one interception, and a rating of 55.6.  After three quarters, Thielen alone had more receiving yards than the Panthers receiving corp.  He finished with eleven catches for 126 yards and a touchdown.  Moore led the Panthers receivers with five caches for 73 yards.  Cook, back in the lineup for Minnesota after missing last week’s game, finished with 140 yards and a touchdown on 29 carries while Hubbard added 61 yards and a touchdown on 16 carries for Carolina.

The Panthers lose their third game in a row and sit at 3-3 heading into Week 7 when hit the road to take on the New York Giants.