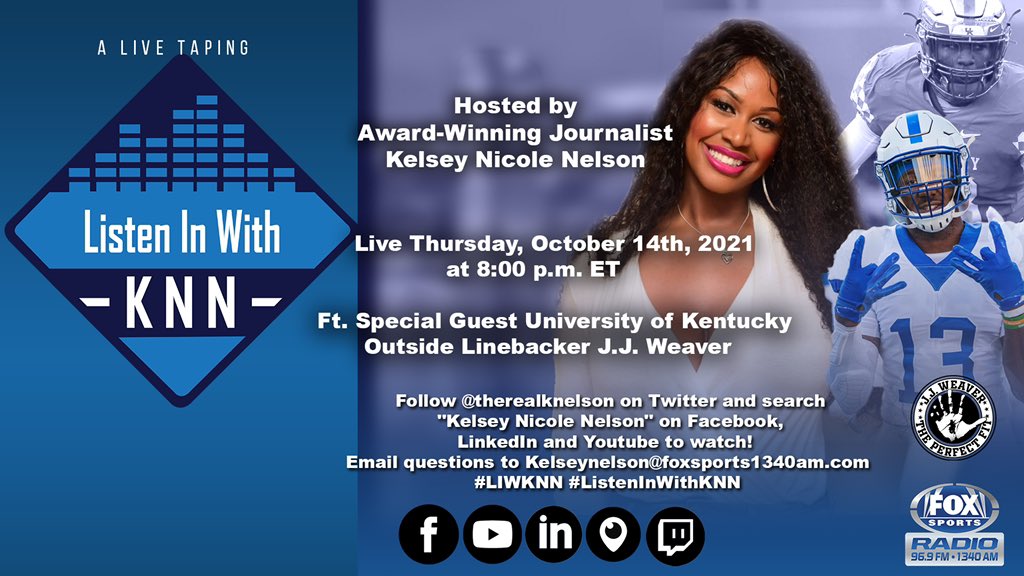 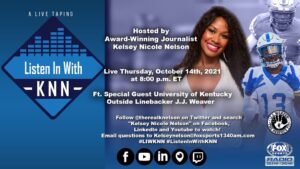 On this special edition of “Listen In With KNN” sports talk radio/podcast show presented by FOX Sports 1340AM/96.9 FM, executive host and producer Kelsey Nicole Nelson welcomed special guest Justin J.J. Weaver, an outside linebacker from the University of Kentucky, to the show.

Weaver has overcome adversity in many areas of his life this year. According to his recently launched website, “Justin has a rare case of central polydactyly on his right hand; his extra finger is fully functioning located in between his middle and right finger.”

Weaver spoke about his extra finger on his right hand in his conversation with Nelson. This is something that he more recently opened up about and has begun to brand. “The Perfect Fit is just to inspire other kids to come out about themself, be yourself. You know, I have an extra finger on my right hand so I have 11 fingers. It’s just a blessing,” said Weaver.

When Weaver was younger, he was not as open about having an extra finger and decided to open up about it this season. “I always got picked on it when I was younger and coming up. So this year, I finally opened up to the world, and told them I have an extra finger,” said Weaver.

Before revealing this, it was difficult for Weaver to find the right glove to fit his right hand. He would also sneak two fingers into one finger part of the glove so it would fit.

He then spoke to his equipment manager at UK and with his mom to make a glove that would fit his hand. Once made, his mother, Stacey Sherrell, came up with the idea of “The Perfect Fit” when brainstorming ideas.

Weaver is a sophomore majoring in social work, inspired by time spent with his therapist over the course of the last year. Last year brought difficulty when Weaver’s father was tragically killed before the season. Later on in the year, Weaver would also tear his ACL, giving him both mental and physical pain at the same time.

“With my therapist, I cried every day to her, I opened up to her, I told her how I was feeling,” said Weaver. He continued on to say, “It’s just a blessing to still be here and to still talk about what happened even though it’s hard to,” said Weaver.

Weaver shared how close his connection with his coach is and when he needed someone most, his coach was there. Head Coach of the Wildcats football team, Mark Stoops, opened up to Weaver about the loss of his own father and recommended seeing a therapist. Coach Stoops shared “His father passed too when he was young around this age…him actually opening up to me, sitting me down, inviting me over to his house, actually trying to help me. He’s the one that helped me get therapy,” said Weaver.

Weaver also spoke about his former high school, Marion C. Moore High School. Although the school did not have the best academics and is in a difficult area, he considers the experience a blessing. “That school taught me how to be myself,” said Weaver.

For the students who are in that area, Weaver said to “Just keep going. Don’t listen to the outsiders..just keep going for more!” He has been able to apply this to his own life and overcome the obstacles in his way.

Despite these setbacks, Weaver is ready to make a comeback and already has 17 TOT and 6.0 TFL this season. Weaver is nominated for the 2021 Mayo Clinic Comeback Player of the Year Award and the 2021 Capital One Orange Bowl-FWAA Courage Award Nominee.

Weaver’s motivation to keep playing is to inspire others. “I just want to basically inspire people…it’s like ‘look at me’, ‘if he can do it, I can do it’,” said Weaver.

Beyond the inspiration, his teammates have also motivated Weaver this year. Kentucky linebacker, Chris Oats, suffered a stroke in the spring of 2020. Weaver is close to Oats. “I have a teammate, that’s why I’m going hard…he’s the best player I’ve seen, so athletic…I got to look at him and seeing what he’s going through, it made me want to inspire other people to just keep doing it.” You can donate to this GoFundMe page to support Oats’ recovery.

Whenever Weaver discussed his teammates he lit up. “I’m glad to have a brotherhood,” said Weaver. “Choosing Kentucky was the best opportunity for me, for my mom, and for my family. It just felt like home to me,” said Weaver.

Weaver attributes his success to his mother whom he calls his best friend. “That’s my best friend. She saved my life, literally from moving from Florida to here, she helped me with everything I can accomplish. She’s the one who got the “The Perfect Fit”; shout out to her for that” said Weaver.

His mom is also involved in his new website and his joining of the Total360 Management team.

Nelson and Weaver spoke ahead of the big game today where No. 11 Kentucky played at No. 1 University Georgia in an SEC Matchup. Both teams came into Week 7 undefeated at 6-0. Weaver spoke about the game and said, “Our team, what we’ve been through, we [are] just so focused on the next game. We [are] excited, it’s a big game. This is the biggest game in a lot of our lives and that we’ve ever played in. A lot of eyes on both sides of the game…I’m just excited, I’m ready!”

Unfortunately, the Wildcats’ 6-0 winning streak was snapped by the Dawgs in a 30-13 loss. The team did come together in the final seconds to score a touchdown with 0:04 left on the clock. QB Will Levis passed to WR Wan’Dale Robinson who had seven catches in that one drive.

To hear more about Weaver’s comeback, check out the episode below. Stay tuned to Weaver’s website for new merch and updates. You can find Weaver on Instagram and Twitter!