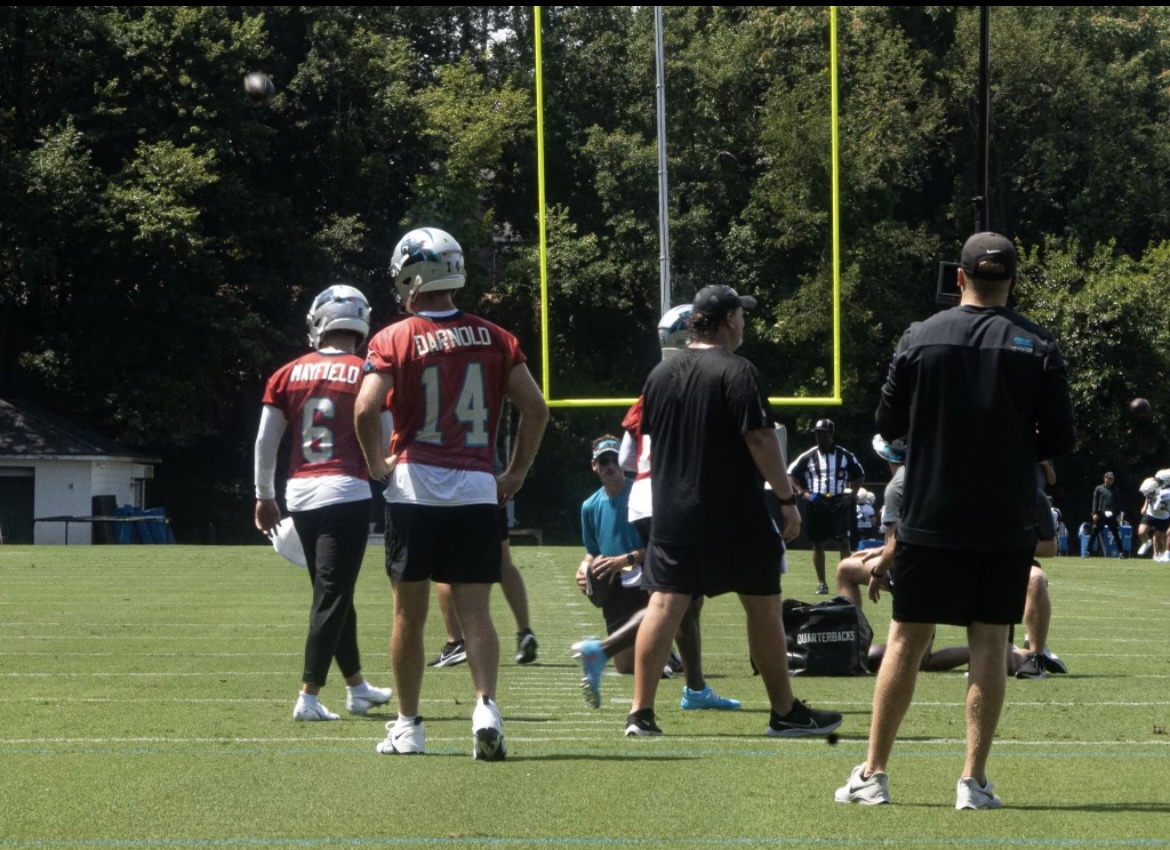 The Carolina Panthers released the first depth chart of the 2022 season. Don’t get too excited – there isn’t a definite QB1 – at least not yet. On Tuesday’s chart, both Baker Mayfield and Sam Darnold are listed as first string QB. That’s not the only starting position with two players listed – both Pat Elflein and Bradley Bozeman are listed as first team center. Ikem Ekwonu, the NC State product the Panthers drafted with the No. 6 overall pick back in April, is not listed as the starting left tackle. Head coach Matt Rhule has said that the starting role would not simply be handed to the rookie and that’s evident in today’s depth chart. Second year player Brady Christensen has taken the bulk of the first team snaps and is listed as the starter at left tackle.

The rest of the roster is relatively surprise-free with Robbie Anderson and DJ Moore penciled in as the starters at wide receiver with Rashard Higgins and Terrace Marshall Jr. listed with the second team. Throughout camp it has appeared that the final wide receiver spot on the 53 will come down to Shi Smith or CJ Saunders – Smith is currently listed ahead of Saunders at the right wide out spot and the ability to contribute on special teams may be the deciding factor. D’Onta Foreman and Chuba Hubbard are both slated as second team running back behind Christian McCaffrey. PJ Walker is listed as second team for the time being, with rookie draft pick Matt Corral listed as the fourth string quarterback. Ian Thomas is the starter at right tight end with Tommy Tremble on the left. The tentative starting offensive line is Christensen, Michael Jordan, Eflein/Bozeman, Austin Corbett, and Taylor Moton.

On the defensive side of the ball, there are no surprises across the front four, currently listed as Brian Burns, Derrick Brown, Matt Ioannidis, and Yetur Gross-Matos. Shaq Thompson, Damien Wilson, and Frankie Luvu are the starting linebackers with rookie draft pick Brandon Smith backing up Luvu. Donte Jackson and Jaycee Horn are the starting cornerbacks, backed up by CJ Henderson and Keith Taylor, Jr., respectively. Jeremy Chinn and Xavier Woods are the starting safeties in a deep position group. It will be interesting to see who ends up being the odd man out. Sean Chandler and Juston Burris are the second team safeties with Kenny Robinson, Myles Hartsfield, and Sam Franklin Jr. all vying for a spot on the final 53.

The Panthers break camp on Wednesday and take the field for their first preseason game on Saturday when they travel to take on the Washington Commanders.