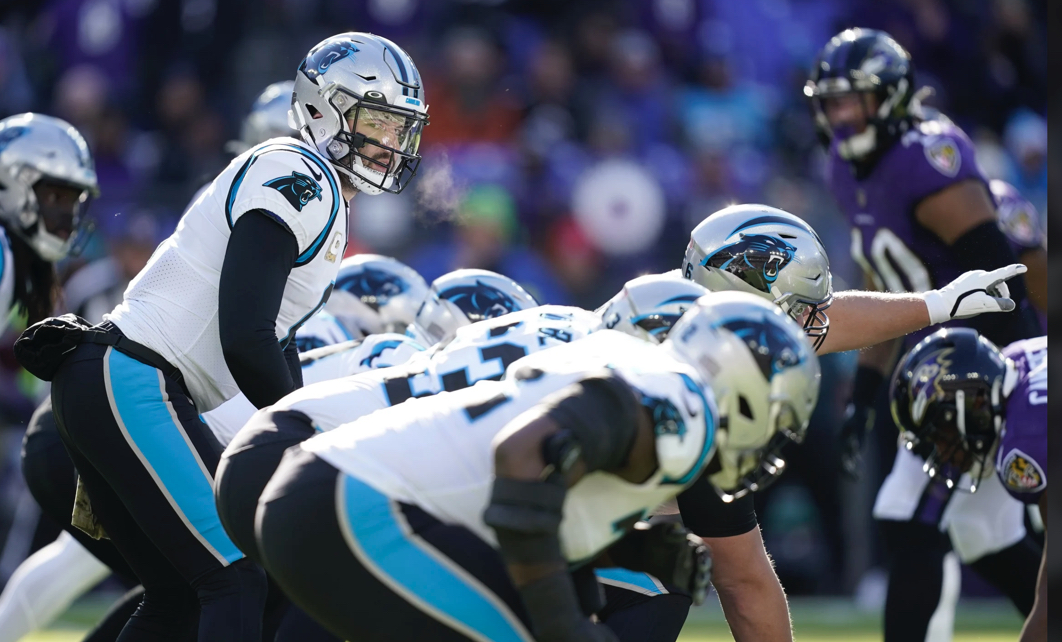 The Carolina Panthers traveled to Baltimore on Sunday looking for their first road win of the season. Ankle injuries continue to wreak havoc on the quarterback room with PJ Walker the latest to be sidelined with a high ankle sprain. Enter, or re-enter, Baker Mayfield, the team’s Week One starter before suffering a high ankle sprain in a Week Five loss to the San Francisco 49ers. Mayfield had been active for the past four weeks but the Panthers chose to stick with Walker as the starter.

The Ravens were coming off a bye and the Panthers were coming off a mini-bye following their Thursday Night Football win over the Atlanta Falcons. The rust was apparent – especially on the offensive side of the ball. The Panthers only managed 63 total net yards in the first half and failed to capitalize off a Bravvion Roy interception of Lamar Jackson in the second quarter. The Ravens had more than twice that with 157 total net yards but could only muster a 32-yard field goal by Justin Tucker to end the first half with a 3-0 lead.

Coming out of the intermission, Carolina went 3-and-out; a category they lead the league in. The defense, a huge reason the score was so close, held the Ravens to three-and-out on their first defensive series and set the offense up with good field position for their next drive. Facing third-and-long, Mayfield connected with Terrace Marshall, Jr for the team’s longest play of the day – 24 yards. The drive culminated with a 32 yard field goal by Eddy Pineiro to tie the game at 3 with 8:11 to play in the third quarter.

Another field goal by Tucker mid-way though the fourth quarter gave Baltimore a 6-3 lead and then, the implosion occurred. Marcus Peters stripped Shi Smith and Marlon Humphrey recovered the ball at the Carolina 31 yard line. On the very next play, running back Kenyan Drake raced to the Carolina 2-yard line to set up first-and-goal. A neutral zone infraction penalty called on Panthers defensive end Brian Burns gave the Ravens first-and-goal at the 1-yard line. Jackson punched it in on the quarterback keeper for the game’s first touchdown of the day with 7:16 to play. Mayfield was sacked on consecutive plays on Carolina’s next series and turned the ball over on downs. The next time two Carolina’s offense took the field, Mayfield was intercepted by Humphrey and Jason Pierre-Paul. The Panthers remain winless on the road this season following the final 13-3 score. They fall to 3-8 on the season and return to Bank of America Stadium next Sunday to face the Denver Broncos.