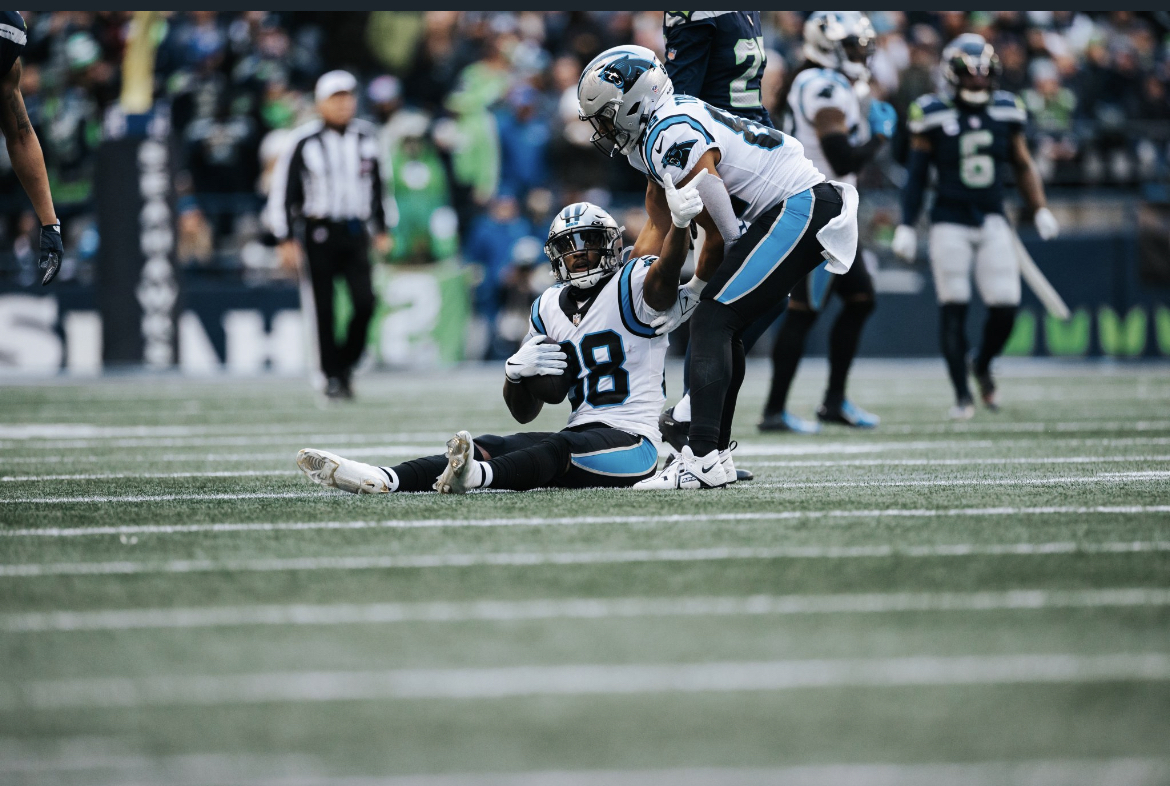 To remain alive in the playoff hunt, the Carolina Panthers had to do something they had not done in a while – win on the road and win back to back games. Coming off a bye week, Carolina hit to road to face the Seattle Seahawks. It’s no secret that the Panthers are their most successful when they’re running the ball and they did exactly that. Behind the legs of D’Onta Foreman, Raheem Blackshear, and Chuba Hubbard the Panthers controlled the clock and the game. With 223 yards on 46 carries, Carolina controlled the line of scrimmage.

The Panthers jumped out to a quick 17-0 lead early in the second quarter courtesy of an interception by Jaycee Horn and 10 points within 21 seconds. After scoring on their first three possessions, the Panthers allowed the Seahawks to claw back within 6 points at the half. Trailing 17-0, Geno Smith connected with Tyler Lockett on passes of 38 and 17 yards, culminating in a 4-yard touchdown reception to bring Seattle within 10.  Smith was picked off by CJ Henderson, leading to Eddy Pineiro’s second field goal of the game for a 20-7 lead. Right before the half, Smith found DK Metcalf in the end zone with 16 seconds remaining in the half. That momentum carried into the second half when Seattle was able to get within 3 after a field goal by Jason Myers on their first drive.

This is where you can tell the difference between this Panthers team and the one Weeks 1-5. Instead of imploding, Carolina showed resilience. After an insane catch by Terrace Marshall, Jr. kept the drive alive. The Panthers got all the way to the Seattle 3-yard line with a fresh set of downs and came away empty handed after four tries. The defense responded with linebacker Shaq Thompson getting a key sack on third down to maintain the lead early in the fourth quarter. On the next drive, the Panthers used a potent ground attack to widen the lead after Blackshear’s 8-yard touchdown carry up the middle. With 7:02 to play, Carolina led 27-17. Another field goal by Pineiro seemed to seal the win with 1:56 to play but the Seahawks weren’t going down without a fight. Smith’s 24-yard touchdown pass to Marquise Goodwin made it a 6-point game with 16 seconds left to play. Horn secured the onside kick to seal the win and Carolina lives to fight another day.

Sam Darnold finished 14-of-24 for 120 yards, and 85.4 passer rating. On the other side of the field, Smith finished 21-of-36 for 264 yards, three touchdowns, and two interceptions. The Panthers used a balanced ground attack with Hubbard and Foreman finishing with 74 yards each, and Blackshear added 32. Darnold went to his legs when necessary and finished with 30 rushing yards himself. The win moves the Panthers to 5-8 on the season and they return to Bank of America to face the Pittsburgh Steelers in Week 15.