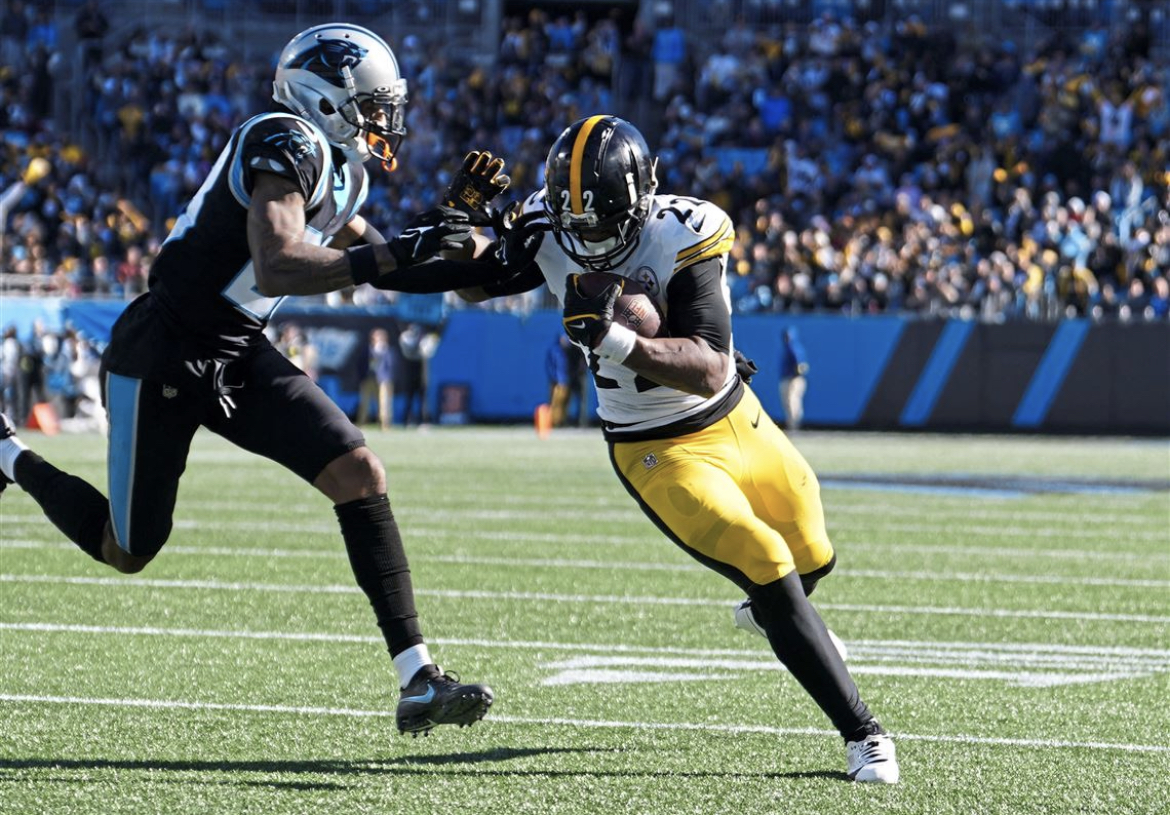 The message all week has been “Protect the Bank” – Bank of America Stadium that is. Sitting at 5-8 and still in striking distance for the NFC South division lead, the Carolina Panthers hosted the 5-8 Pittsburgh Steelers. Carolina came into today’s game on a 3 game home win streak and holding their own destiny in their hands to a certain degree. With Kenny Pickett in the concussion protocol, Mitch Trubisky got the start for the Steelers and they came out swinging. Pittsburg cracked the scoreboard first, culminating a 12-play opening drive with a 7 yard touchdown run by Najee Harris to make it 7-0. The Panthers responded with a touchdown of their own at the top of the second quarter when Sam Darnold connected with DJ Moore on an impressive 5 yard touchdown to knot the score at 7 with 14:12 to play in the half.

A big 38 yard sideline grab by George Pickens set up Pittsburgh’s second score of the day. Jaylen Waddle punched it in from 2 yards out a few plays later to give the Steelers the 14-7 lead with 8:20 left to play. The Panthers finished the half out punting on their next three possessions. Pittsburgh got the ball to start the second half and orchestrated an 11:43 long drive that ended in a Trubisky touchdown carry on the keeper to make the score 21-7. Carolina just could not find the end zone. After Chuba Hubbard broke free for a 45 yard run, the drive stalled out at the 49-yard line with Darnold getting sacked on back to back plays. On their next possession, an unsportsmanlike conduct penalty on Marcus Allen gave the Panthers a first down at the PITT 34 but they ended up settling for the field goal to get within 11 with 11:52 left on the clock. After the defense forced a 3-and-out, the Panthers got all the way down to the Pittsburgh 4 yard line with help from a defensive pass interference call against Cameron Sutton but still couldn’t hit pay dirt. Another field goal by Eddy Pineiro made it a one possession game with 6:15 to play. However, the Panthers simply could not get off the field on third down and the Steelers clock management all but sealed the game. Each team scored another field goal to make the final score 24-16 with Carolina falling to 5-9 on the season; making their road to the playoffs even trickier.

Carolina is back at home next week to face a surging Detroit Lions team.