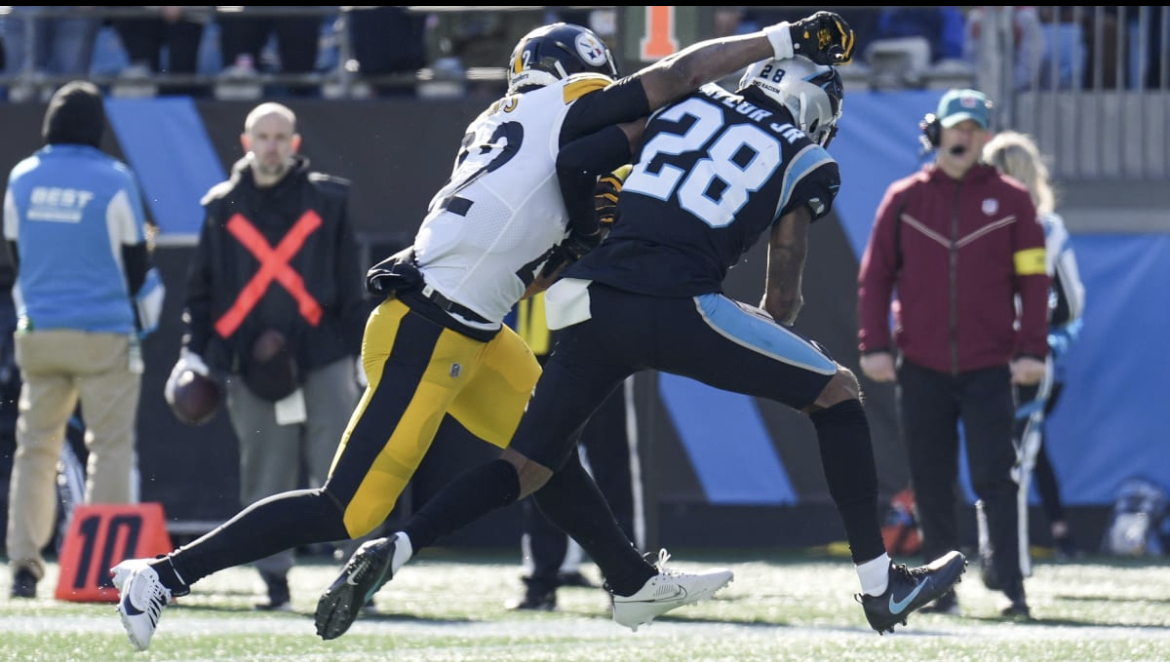 The Carolina Panthers went into the season with a deep cornerback room anchored by veteran Donte Jackson and former first round draft pick Jaycee Horn. When you add in CJ Henderson, a former first rounder himself, and promising young corner Keith Taylor, Jr. that’s a pretty solid group. Well, when they’re healthy. Jackson is out for the season with a torn Achilles and Henderson left Sunday’s game early with an ankle injury. The effect was immediate as Keith Taylor was instantly targeted nearly every time Pittsburgh quarterback Mitch Trubisky looked downfield.

In the first half, Taylor was tasked with covering rookie George Pickens. who had 53 receiving yards at the half – the bulk coming on a 38 yard reception on third down. That catch extended the drive, which ended with a 5-yard touchdown run by Jaylen Warren to give the Steelers the 14-7 lead that they ended up taking into halftime. A switch in the second half yielded similar results – for a different receiver. Horn covered Pickens while Taylor was put on Diontae Johnson. After being held to three catches for 16 yards with Horn in coverage, Johnson had seven catches for 82 yards in the second half when covered by Taylor.

In speaking with media following the game, Taylor called today’s showing “probably the worst game” he’s ever played in his life. Without combing through his career film, many Panthers fans are inclined to agree. He won’t have long to wallow in regret however. After Tampa Bay lost its second game in a row – and third in the last four games – the door is not completely slammed on the Panthers’ playoff hopes. They will have to get past a surging Detroit Lions team – which may not be an easy feat. Since starting the season 1-6, the Lions are 6-1 since and in the hunt for a playoff berth. There’s no injury update on Henderson yet, but if the Panthers hope to stay in the hunt, they can’t let Jared Goff and the Lions get into any kind of rhythm. Detroit is averaging 375.1 yards per game; roughing 249 of those by air.

Asked after the game if there were options other than Taylor; – TJ Carrie for instance – interim head coach Steve Wilks answered, “Keith’s got to make plays. Whoever is in there, TJ Carrie, Keith Taylor, whoever it may be, they’ve got to make plays.” Prior to Matt Rhule’s termination, Wilks served as secondary coach so he’s familiar with what he has in that room. Taylor said that his conversation with teammates during and following the game centered around the theme of having a short-term memory. “You’ve got to have a short-term memory in this league especially as a DB, as a cornerback. Really that’s what it is.” Looking back, Taylor said that he didn’t feel as though Johnson or Pickens were tough assignments; It was a matter of execution.

The team will take Monday off before returning to practice and meetings on Tuesday to prepare for the short week. Carolina hosts Detroit on Saturday afternoon, hoping to silence the roar of the proclaimed “Brand New Lions.”