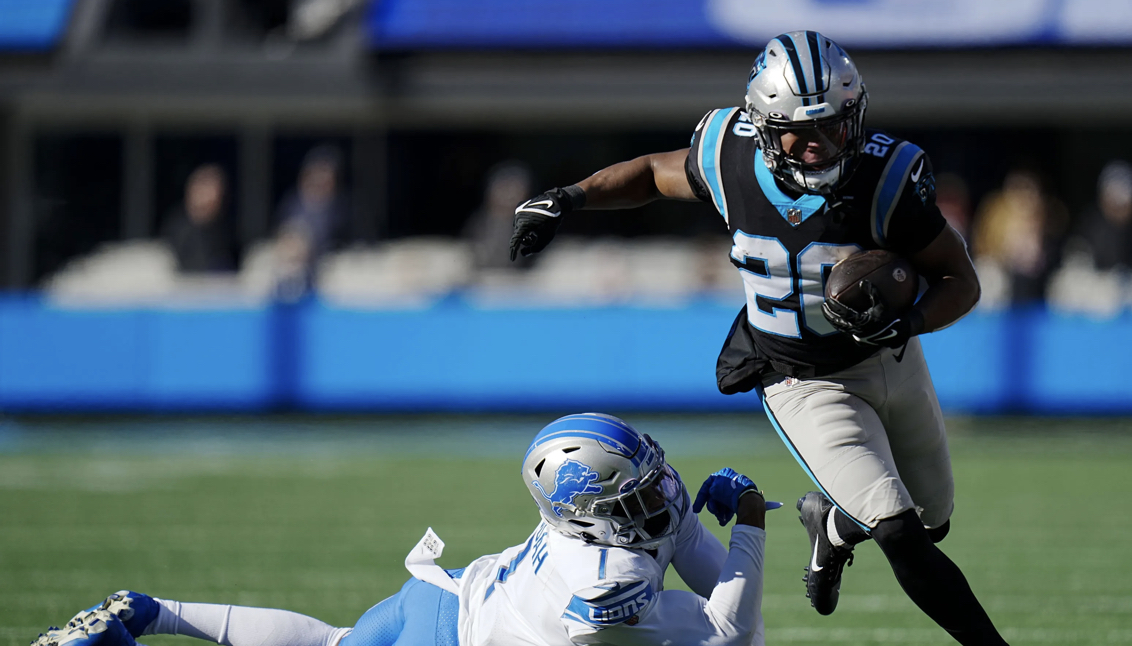 After coming up short last week in a golden opportunity to take the lead of the NFC South, the Carolina Panthers hosted the Detroit Lions in their last home game of the regular season. Make no mistake; this isn’t your grandparents’ Lions. After starting the season 1-6, they went 6-1 and were surging as they rolled into Bank of America Stadium. But the Panthers had a point to prove after being stifled in the run game and allowing the Steelers to control the clock and the game; they had to win on Sunday to keep any hopes of postseason play alive.

The offensive line and the 3-headed rushing tandem of D’Onta Foreman, Chuba Hubbard, and Raheem Blackshear ran down on the Lions with authority – amassing a franchise-record 240 yards on the ground in the first half. On the opening drive, the Panthers kept it on the ground with Hubbard grinding out runs of 30, 35, and 5 yards before Blackshear punched it in from 7 yards out. Detroit responded with a score of their own when Jared Goff connected with Shane Zylstra on a 3 yard touchdown to tie the game at 7 with 8:38 to play in the first quarter. The Lions seemed primed to take the lead, driving down to the 10 yard line before Goff fumbled the snap and Yetur Gross-Matos recovered for the Panthers. Sam Darnold capped an 8-play drive with a 3 yard touchdown run to put the Panthers ahead 14-7 to 9:35 to play in the second quarter. The Panthers defense forced the Lions into 3-and-out on their remaining possessions in the first half while growing their lead. Foreman added a 4 yard touchdown run and Eddy Pineiro connected on a 37-yard walkout field goal to send Carolina into the locker room with a 24-7 lead. They only punted once en route to a franchise-record 364 net yards in the first half.

Coming out of the intermission, the Lions went 3-and-out on their first two possession while Carolina continued to grow their lead. After only one target in the first half, DJ Moore came up with a big 47 yard reception and scored one play later from 5 yards out to give the Panthers a 31-7 lead with 9:12 to play in the third quarter. The Lions would not score again until a little over 3 minutes in the third quarter when Goff connected with Zylstra for his second touchdown of the day on a 7 yard reception with 3:09 to play. The 2-point conversion failed, leaving the score 31-13 going into the fourth quarter. Pineiro tacked on another field goal early in the fourth quarter, effectively putting the game out of reach. Zylstra added a third tochdown with 3:50 to play, and the Panthers recovered the ensuing onside kick. Sitting with a 37-20 lead and time winding down, it was all Panthers today. Pineiro added a cherry on top with another field goal with under 2 minutes remaining to increase the Carolina lead 37-20. The Lions managed to tack on one more field goal to make the final score 37-23. Panthers broke several franchise records today and saw two ball carriers pass the 100-yard threshold in Hubbard and Foreman. The 570 total net yards are the most in Panthers history.

Carolina gets its sixth win  – the highest season total since 2018 – and its playoff hopes remain intact for the time being. They hit the road to face the Tampa Bay Buccaneers, hoping for the sweep and a chance at the postseason.