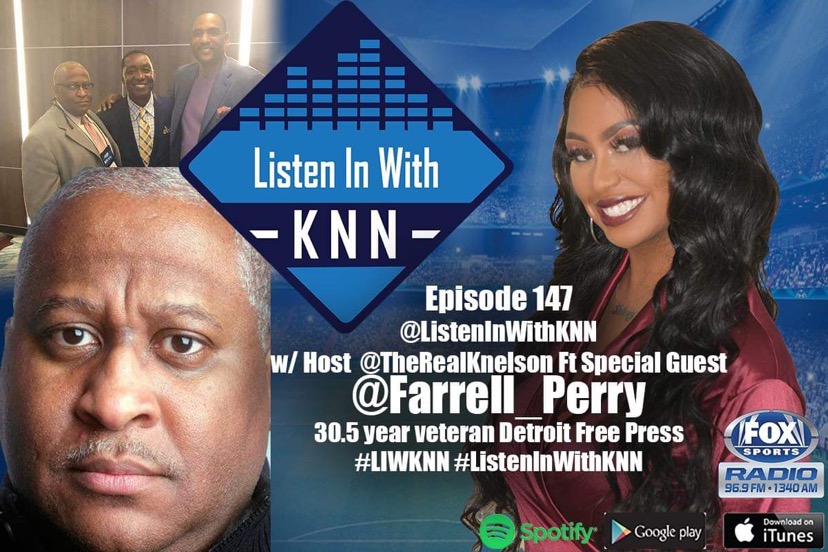 On the 147th episode of Listen In With KNN on Fox Sports 1340AM, host Kelsey Nicole Nelson welcomed Perry Farrell, an internship coordinator with the Communication Department at Wayne State University and a 30 ½ year veteran of the Detroit Free Press to the show.

Speaking of his career, the most satisfying about his time at the Free Press was the relationships he built and showing up to work.

“Isiah Thomas is one of my best friends and I talk to Rick Mahorn, Rip Hamilton, Chauncey Billups and Ben Wallace. Just to be able to know those guys and hang out with them. I took my first sick day in the 29th year I was at the Free Press as I never took a sick day,” Farrell said. “I appreciate the people that really knew who I was about still care for me today.”

In addition to his reporting career, he is the internship coordinator in the Communication Department at Wayne State University and the faculty rep for the Society of Professional Journalists. As the first African American male in the department, Farrell’s responsibility is to pave the way for the next person coming into the industry.

“I need to make sure I do everything that I can to place the students in good internships and get good jobs. I love what I’m doing and love being able to give all my knowledge to these young people and 98 percent are receptive to them,” he said.

However, there has been a decline of African American head coaches as 29.2 percent of Division I Men’s teams and five of 30 NBA teams are led by Black head coaches. Farrell believes that people who look like him have to be in a position to be given opportunities.

“You need African American leadership in front offices who believe in African American coaches and hire them. When it gets down to it, they just don’t care and we have to support each other more. We have to demand that our bright young stars get a chance to sit on the bench and be an integral part of a program,” he said. “They have to shine to make the way for the next person coming down the pipe.”

Speaking of African Americans opening doors, Farrell was a big fan of the great Georgetown head coach John Thompson, who passed away on August 30th, 2020. What he loved about the 27-year Hoya legend was his coaching and players.

“When you walked in to talk to John Thompson, you were just intimidated by his size and he was a big man. I asked him a question one time about his players and he says, ‘we’re on a need to know basis.’ I got to know John at Final Fours and some of the black media would meet with black coaches and we get to talk. Great and intelligent man and I truly believe he saved Allen Iverson’s life because I think Iverson would’ve been in jail if it hadn’t been for John Thompson going to bat for him,” Farrell said.