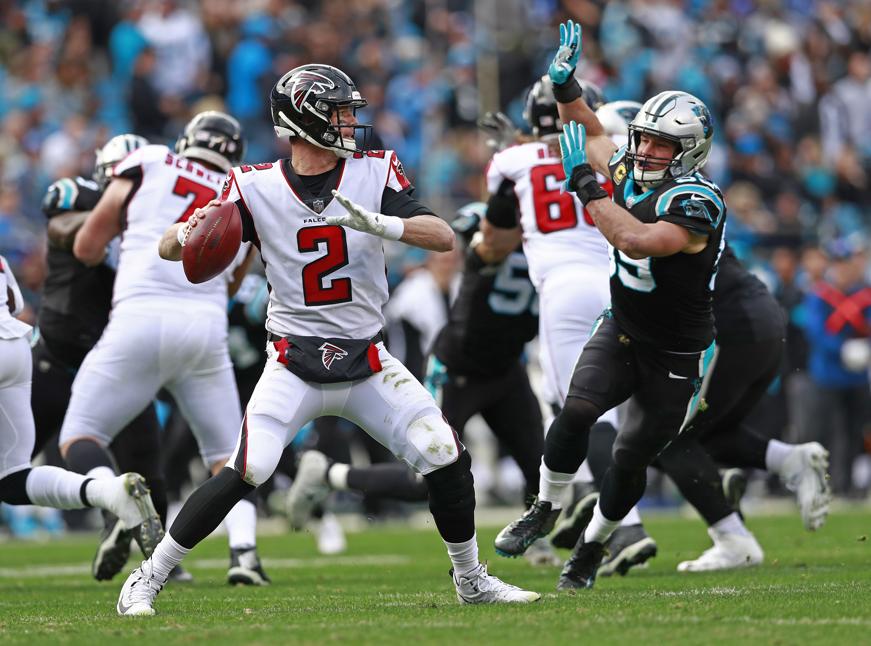 At the onset of the season, neither team expected to be playing under these circumstances. When the Falcons and Panthers meet late in the season, it’s usually a game with playoff implications. With both teams all but eliminated from the playoffs, the biggest thing on the line was pride.

With starting quarterback Cam Newton out with a sore shoulder, the Panthers rallied around back up Taylor Heinicke who had taken the bulk of practice reps since Week 7. A number of veteran players took the field in what could be the last home game – Ryan Kalil, Thomas Davis, and Julius Peppers.

The game started off quickly with both teams scoring on their first drives and playing pretty evenly throughout the first half. After fumbling his first snap, Heinicke settled in, connecting with tight end Ian Thomas for the first career touchdowns of both their careers.

Heinicke left the game briefly in the second quarter with a left elbow injury. In his absence Kyle Allen went 4-for-4 for 38 yards. Heinicke returned at the 2-minute warning and with the Panthers in the red zone. An interception by Jack Crawford ended the drive and both teams went into halftime tied at 10.

The Falcons got the ball first to begin the second half and did so with a bang. Quarterback Matt Ryan threw a 75-yard bomb to Calvin Ridley to put the Falcons up 17-10. The lone other score of the game came on a 44-yard pass from Ryan to Mohamed Sanu.

After an impressive showing against the New Orleans Saints on Monday night, the Panthers defense was plagued by a familiar foe….chunk plays over the top. The Falcons picked up 151 yards on just 3 pass plays of 32, 44, and 75 yards. Head coach Ron Rivera expressed his frustrations over giving up big yards over the top following the game.

“That’s probably the biggest thing I’m going to have difficulty with just because we have tried to put ourselves into position to keep everything in front of us and we have been doing for the most part a pretty decent job. It’s just one or two flare ups. Today it was really disappointing most because of what the call was. I thought that was a call that was built for that type of play and unfortunately we didn’t execute it.”

On the other side of the ball, the red zone struggles continue as the Panthers went 1-4 from inside the 20-yard line. “We are trying to correct it right now. We are trying to do things that we can to put the ball in the end zone. Unfortunately, we haven’t,” said Rivera.

Christian McCaffrey continues to be a bright spot on offense, finishing with 77 receiving yards and 101 rushing yards. Heinicke finished 33-53 for 274 yards, one touchdown, and three interceptions. For the Falcons, Brian Hill finished with 115 yards while Calvin Ridley led the receivers with 90 yards. Matt Ryan finished 15-26 for 239 yards and three touchdowns.