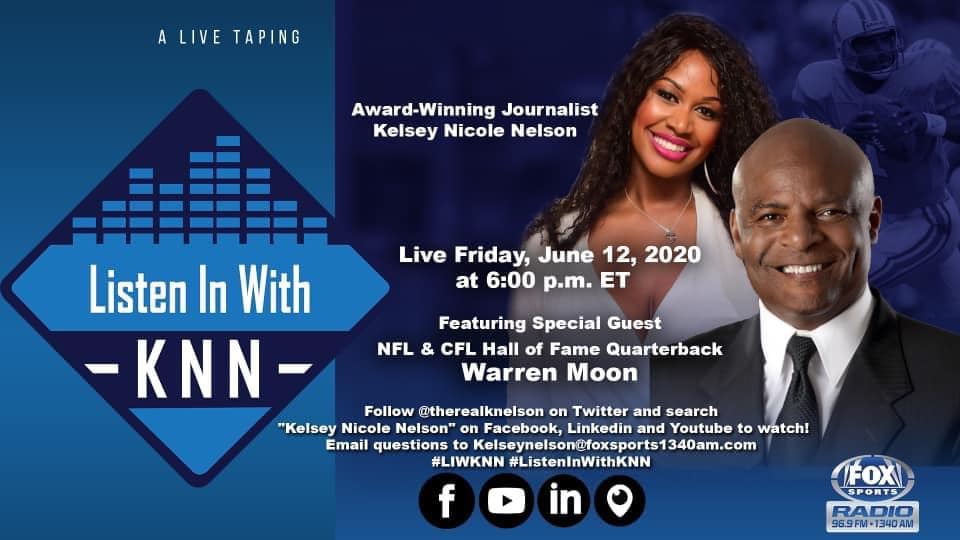 On the latest episode of Listen In With KNN on Fox Sports 1340AM, award-winning journalist Kelsey Nicole Nelson welcomed National Football League and Canadian Football League Hall of Fame quarterback Warren Moon to the show. He played 17 seasons in the NFL with the Houston Oilers, Minnesota Vikings, Seattle Seahawks and the Kansas City Chiefs making nine Pro Bowls in the process. Moon started his professional career in the CFL with the Edmonton Eskimos as he won five Grey Cup titles.

“When I came out of college, I wasn’t given the opportunity to show what I can do at the quarterback position. So that’s why I had to go to Canada to play but things worked out when I came back and still had a long career.”

His favorite memory was when he signed his first NFL contract after playing in Canada for six years despite critics telling him he couldn’t be a QB. “I was the highest-paid player in the league at that time. That was something I was really proud of and felt like I had persevered through quite a bit to stay positive and to continue to improve and put myself in a position where I can be paid like that.”

Moon played until he was 44 and never thought he would play 23 years professionally. But he has an idea about how older quarterbacks like Tom Brady and Drew Brees will play in their advanced ages. “I knew as the season got longer, your body starts to wear down a little bit. Your legs weren’t as fresh as they were earlier in the season and your arm tended to be a little more tried. So (Brady) has to be much more conscious of getting rest, how he’s eating, how many reps he’s taking in practice every day as the season moves along. All those things take the wear and tear off of his body so he’s fresh at the end of the year when you need him the most if (Buccaneers) make a playoff run.”

Moon is the 10th African American in NFL history to be a starting QB despite coming into the league at the age of 28. He mentioned how the top black QB’s like Patrick Mahomes II, Lamar Jackson, Russell Wilson, and Kyler Murray is taking over the league.

“The great thing that I’m proud of my career is the fact I was able to make make a change in people’s attitude about allowing African Americans to play this position and play it at a high level.” He added the most important part of being a good quarterback is putting the time in your work.

Another black quarterback, Colin Kaepernick made headlines in 2016 when he took a knee during the national anthem to raise awareness of racial injustices and hasn’t played in the league since. “The main thing is it in your heart to play football because there’s a lot going on with the protests. If you’re that involved in this you can’t be that involved football. If you are not all in as the quarterback in the NFL, they don’t want to on the football team because you have to be committed.

As a result of the killing of George Floyd, the NFL’s recently announced to they’re committing 250 million dollars to combat social injustices. “The mark of good ownership is admitting you’re wrong and apologizing for that and doing something about it. A lot of people want them to apologize directly to Colin (Kaepernick). They put their money where their mouth is. I know more people what to see more owners come out and speak in front of the camera. That will come in time as well. The NFL is going in the right direction on this and hopes it continues.”

Moon’s final advice to the fans is to be transparent with themselves and to treat people the way you want to be treated. “If you somehow make that happen, this would be a better place to live.”

In the next episode of “Listen In With KNN” host, Kelsey Nicole Nelson welcomes in retired NFL player and cancer survivor Jamie Winborn.