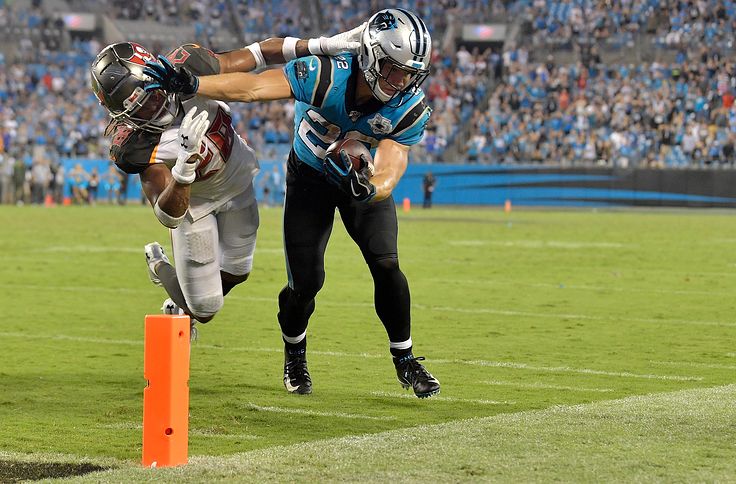 It was supposed to be a game of redemption. For the Carolina Panthers who did not want to start 0-2, for Cam Newton who threw four interceptions in the team’s last meeting with the Buccaneers, and lastly for Gerald McCoy who spent the first eight seasons of his NFL career with Tampa Bay after the club released him in the offseason. Instead it ended up being another entry into the Panthers familiar narrative of “missed opportunities”.

There was the buzz of anticipation as McCoy, who signed a one-year deal with the Panthers back in June, prepared to face the Buccaneers for the first time since his release. Although McCoy downplayed the significance of that factor, he no doubt wanted to stick it to Bucs – mainly because he didn’t want to start the season 0-2. For Cam Newton, the game would serve as the latest stop on his road to recovery and redemption; however, Thursday night’s game created even more questions around the former MVP as the Panthers fell to the Buccaneers 20-14 at Bank of America Stadium.

Carolina opened up with the defense forcing a three-and-out possession. The Panthers drove to the Bucs’ 47-yard line before failing to covert on 4th-and-1 and turning the ball over on downs. The two NFC South foes traded a pair of field goals to lock things up at 3-3. Two possessions later, the Panthers once again moved the ball well, getting to the Bucs’ 19-yard line before settling once again for a field goal. In fact, the Panthers made it to the red zone on three occasions but failed to make it into the end zone – instead settling to four field goals. Red zone inefficiency is an issue that plagued the team last season during a seven-game losing streak.

“When you have to kick field goals, I think that’s where the game gets lost. We had opportunities and unfortunately we went backwards. You can’t do that. You can’t expect to win a football game when those things happen,” said Rivera following the game.

The final dagger was when the Panthers drove down to the 2-yard line on 4th & 1 and failed to gain the 1/2 yard needed to secure the first-and-goal with a little over a minute left in the game. In what ended up being Carolina’s final play, running back Christian McCaffrey took the direct snap, faked a reverse, and was stopped short of the line to gain. The play raised questions. You have one of the most prolific rushing quarterbacks in the history of the NFL in Cam Newton; why was the ball not in hands? Head coach Ron Rivera said that even before the Bucs were flagged for calling back-to-back timeouts, giving the Panthers the ball on the 2 yard line, the play call had been established. “Well, what we hoped to is Christian (McCaffrey) we felt had a good opportunity to score. So we went fake reverse ghost action, trying to deek them a little bit. We had every opportunity. We thought we could at least get the first down but unfortunately, we didn’t,” explained Rivera.

The play was designed with the assumption that Tampa Bay cornerback Vernon Hargreaves III would follow Carolina receiver Curtis Samuel. When Hargreaves decided to stay put, he was left unblocked and able to make the game-sealing tackle on McCaffrey. The fourth year cornerback described the final play.

“Make the play” is something that Newton reiterated over and over in his postgame press conference. “You know offensively, we didn’t hold up our end of the bargain. Needless to say, that’s the obvious, ” said Newton. “We didn’t uphold our end and we’re past due. Special teams had a good return, defense was stout all game. All fingers are just pointing back to me specifically on offense.”

The Panthers had 20 first downs compared to the Bucs’ 16 and also had more net yards (352 yards) than Tampa (289 yards). However, they could not find the end zone. The bright spots of Thursday’s game were special teams and kicker Joey Slye who connected on field goals of 32, 37, 54, and 51 yards. The only other Carolina points came by way of a safety as linebacker Luke Kuechly took down running back Peyton Barber in the end zone. After a monster performance in the opening week, McCaffrey was held to just 37 rushing yards on 16 carries and 16 receiving yards on 2 catches. Tight end Greg Olsen had 110 yards on 6 receptions while Samuel added 91 receiving yards and DJ Moore hauled in 9 catches for 89 yards.

The highly discussed 3-4 defensive scheme has yet to make an appearance in the regular season but the defense put up a valiant effort, sacking Winston 3 times. Kuechly led the way with 8 tackles while McCoy added one tackle and three assists, including a quarterback hit. The Panthers will have nine days to prepare for the Arizona Cardinals and try to avoid falling to 0-3 to begin the season.