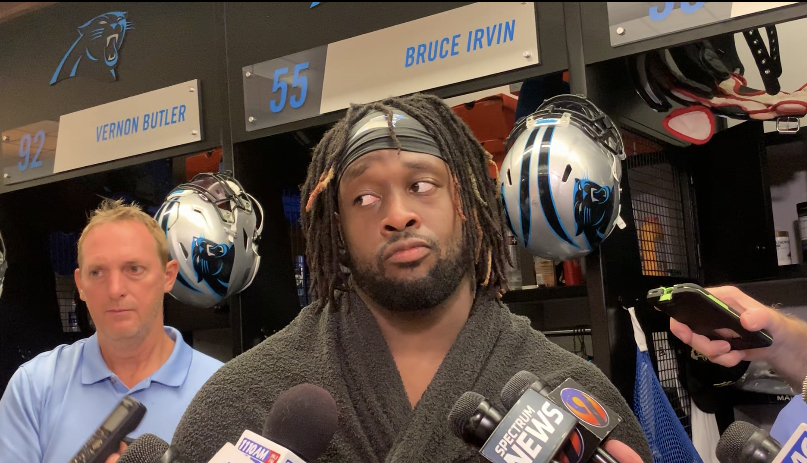 When new Panthers defensive tackle Gerald McCoy takes the field against his former team, the Tampa Bay Buccaneers on Thursday night, all eyes will be on McCoy. However, the 6-time Pro Bowler says it will be just another game. Before speaking to media at his locker following Tuesday’s practice, McCoy stated, “It’s just a game. It’s Week Two, it’s just Week Two.”

“I don’t want to go 0-2. I know that. I’ve done that too many times in my career. We’ve got a really good team here and you never want to let one loss turn into two so we’ve got to bounce back and make sure we go out and play well on Thursday.”

When asked about how he is helping his teammates prepare for Bucs quarterback Jameis Winston, McCoy replied, “I’m telling everything. I told y’all at my opening press conference that I’m loyal to whoever I’m with. I already know what they’re going to try to do to me but I know how everybody blocks. I know what everybody over here (the Panthers) does well so I’m kinda helping put together matchups; matchup problems.”

McCoy has made it clear that he holds no anger against the team he had played for in his first eight years in the NFL. That sentiment remains the same although he acknowledges that his release bothered him at first. “You know at first, at first it bothered me. But then the more I think about it…whatever, moving on. I’m still wearing my old number.” To McCoy, too big of a deal is being made about the upcoming game. “I’m saying this to my family, my friends, you guys (media), fans: everybody is making this game a big deal but I’m not. Everybody thinks I’m going to make this a big deal; I’m not. The only thing that’s big about this game is that I know exactly who I’m going against.” McCoy also said that he will shake hands, but he won’t be “buddy buddy”.

“Some people play against their old team and they’re like ‘Oh I’m not shaking they hand’ and all that. Nah I’m not gonna be buddy buddy, I’m gonna try to kill everything moving, but ain’t no hard feelings. There’s some people in the building I don’t like but whatever. They know I don’t like them. I ain’t gotta say no names, they know.”

Bucs head coach Bruce Arians, who did not coach McCoy, also talked about the buzz surrounding McCoy’s first game against the franchise that drafted him third overall in the 2010 NFL Draft.

While you won’t get McCoy to speak negatively about anyone in the Bucs organization; there is one thing McCoy wishes were different – he wishes the game was in Tampa Bay so that he could hear the fans boo him. When the Panthers face the Bucs a second time this season, it will be in London.