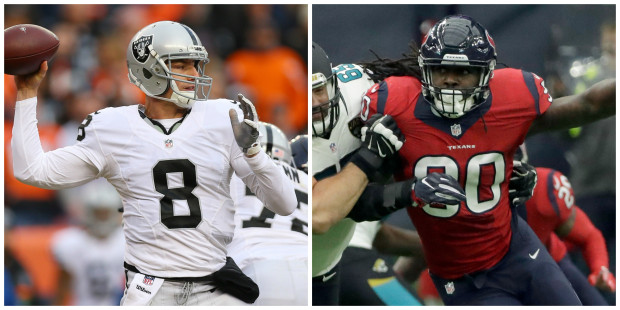 The NFL Playoffs will begin Saturday, and they include a rematch between the Oakland Raiders and the Houston Texans.

The Raiders finally ended one of the league’s longest postseason droughts and are in their first playoff game since 2002. However, they couldn’t be in a more dire situation.

After starting the year so strong, they lost quarterback Derek Carr to a broken fibula. Backup Matt McGloin suffered a severe shoulder injury in the finale against the Broncos, and it looks like Oakland will be rolling into Houston with rookie Connor Cook as their starter.

This could be a blessing in disguise for the Texans; their offense has been bad all year, and they’re involved in their own share of quarterback problems.

Texans quarterback Brock Osweiler has not been worth the $72 million he received in the offseason, and Tom Svage isn’t ever going to be any better than he is now.

However, Houston has relied all season on its fantastic defense. This year, they have been without one of the best defensive players in the NFL in J.J. Watt. Picking up the slack for him is Jadeveon Clowney, the former No. 1 pick who’s finally played like the elite defender he was at South Carolina.

The Pro Bowler Clowney isn’t alone; he’s been aided by several stellar performances all year, like the play of defensive back Quintin Demps. The veteran safety has been among the league’s best with six interceptions, five of which came in the final six games.

This playoff game could be incredibly low-scoring, as neither offense has been very impressive over the second half of the season (and in Houston’s case, not all year).

When it’s all over, a special teams play or a big defensive swing could be the difference. Guys like Clowney or Raiders stud Khalil Mack need to step up and be game-changers to make up for their offenses.

The Raiders and the Texans play at 4:35 p.m. Saturday at NRG Stadium in Texas.