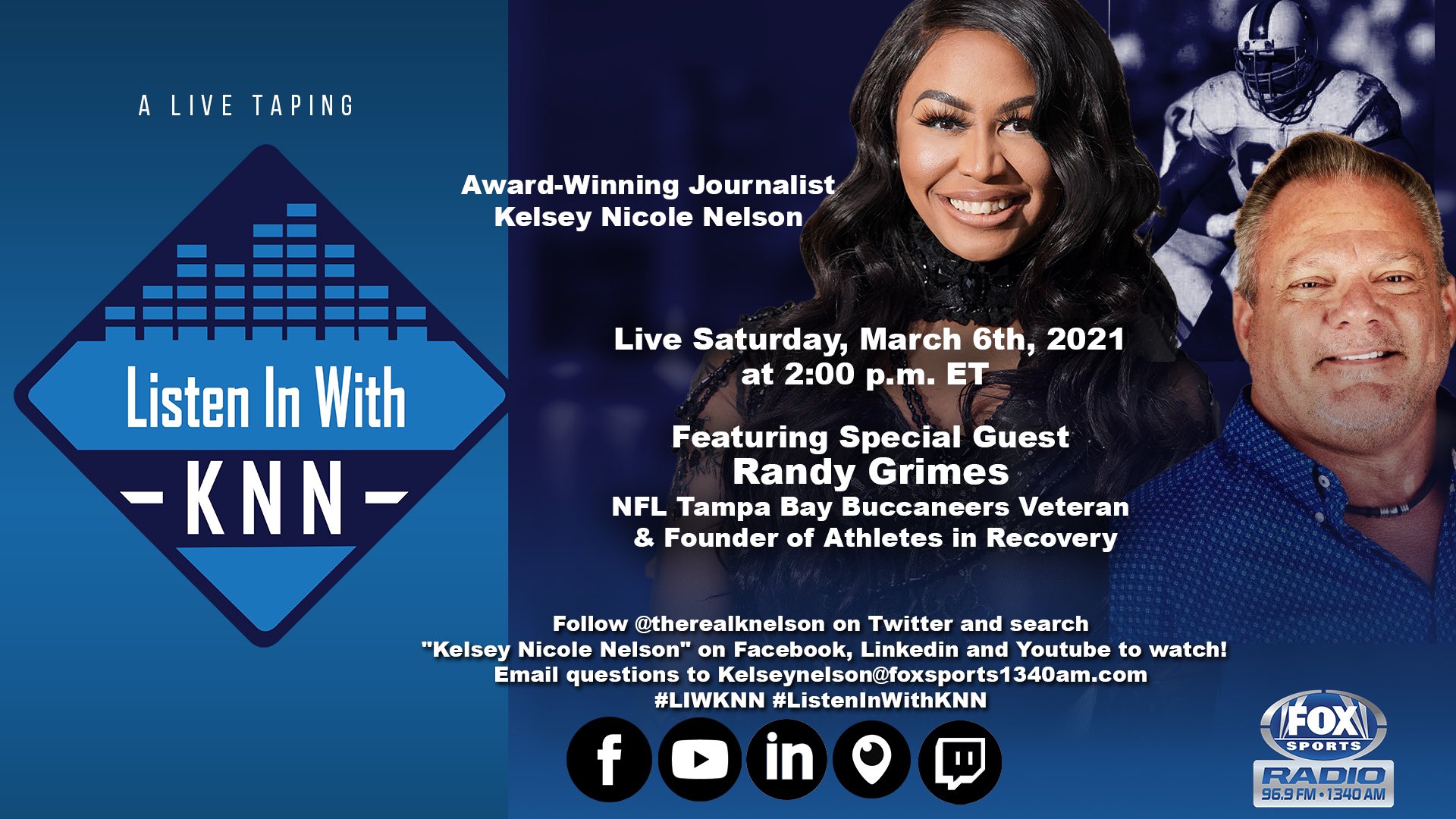 On the latest episode of Listen In With KNN on Fox Sports 1340AM, host Kelsey Nicole Nelson welcomed former Tampa Bay Buccaneers center and founder of Athletes In Recovery Randy Grimes to the show.

Speaking of his journey, he was born and raised as a Southern Baptist in Tyler, Texas. Football was huge in East Texas and it came easy to Grimes. While in high school, he didn’t start putting on a lot of weight until his senior year as he was moved to the center position.

The Tyler, Texas native had the opportunity to go anywhere in the Southwest Conference but ultimately chose to go to Baylor University to play under head coach Grant Teaff. While at Baylor, Grimes played with great players such as Mike Singletary, Walter Abercrombie, Frank Pollard and Greg Hawthorne. Also, that’s where he met his wife and married her after his junior year.

“We were just in love and we were gonna live the All-American dream. She was going to teach and I was going to coach. Football came easy for me and I had a great college career. After my junior year, I saw these scouts coming around looking at other seniors,” Grimes said. “I started thinking maybe this is something I can continue to do and I really got serious about my senior year.”

After his college career ended, he heard rumblings that he was going to be either drafted by the St. Louis Cardinals or the Dallas Cowboys. In the end, Grimes was selected in the second round by the Tampa Bay Buccaneers in the 1983 NFL Draft despite not knowing where Tampa was.

“I’m an East Texas kid who has never even seen the ocean. But I did know that Tampa had gone to the playoffs the year before in 1982. I was excited to be going to not only a playoff caliber team but to the seaside community not only to start my career in pro football but to start my family and everything else. So I was excited,” he said.

Grimes played all 10 seasons of his career with the Buccaneers playing with the likes of Hugh Green, Lee Roy Selmon, Jerry Bell, Dave Logan and Vinny Testaverde. However, he was the only consistent player on the team as they had five different head coaches, six different offensive line coaches and at least 10 different quarterbacks.

Unfortunately, Grimes began using opioids to help manage his chronic injuries. He looked at it as a necessary evil because he wanted to be the best center that ever played the game. But it turned out to be a full-blown addiction and it progressed to a point where he was taking so much medication before the games and was playing in games while in a blackout the last two years of his career.

“I would be home on the couch at 11 or 12 o’clock at night after a one o’clock football game that I played that Sunday afternoon and be all beat up and didn’t remember any of it. I was the guy making line calls, changing blocking schemes and getting other players going in the right direction. I was doing all this in a blackout and that was that necessary evil that progressed over those eight years that I was doing that while I played for the Bucs,” said Grimes.

His addiction continued after his playing career ended as he had a series of seizures, car wrecks and emergency room visits in the spring and summer of 2009. Grimes’ former teammate, Tom McHale, died of an accidental drug overdose the year before after self-medicating his injuries. It was then that Grimes found the courage to ask for help and was admitted to the Behavioral Health of Palm Beaches, a South Florida drug and treatment facility in September of 2009.

“I remember thinking that if this is what being sober feels like, then I don’t have any part of it because all the guilt, shame and the huge wake of destruction that I left back in Houston. It was huge and it was like somebody came up behind me and draped a warm quilt around my shoulders, I remember feeling and weight and warmth on me. It was like all those feelings were lifted off of me at that very second,” he said. “Not only I get the confidence that I can do this process but I also realized that I had to make everything that I had put everybody through all those years mean something.”

During his time at the treatment facility, Grimes realized that the NFL didn’t have any resources to help former players that were struggling with mental health and substance abuse issues. As a result, he started a nonprofit organization called Athletes in Recovery and an independent organization called the NFL Player Care Foundation. Grimes reached out to several former players struggling with substance abuse, self-medicating or so many mental health issues with anger, depression and isolation to help them.

“We were doing as many screenings and getting in front of many guys as we could. Next thing you know over the course of 10 years, we’ve been able to help hundreds of former NFL players and their families but also Major League Baseball got involved in sending their former players along with the NHL and the NBA. Regardless what sport you play, we all have the same issues.”