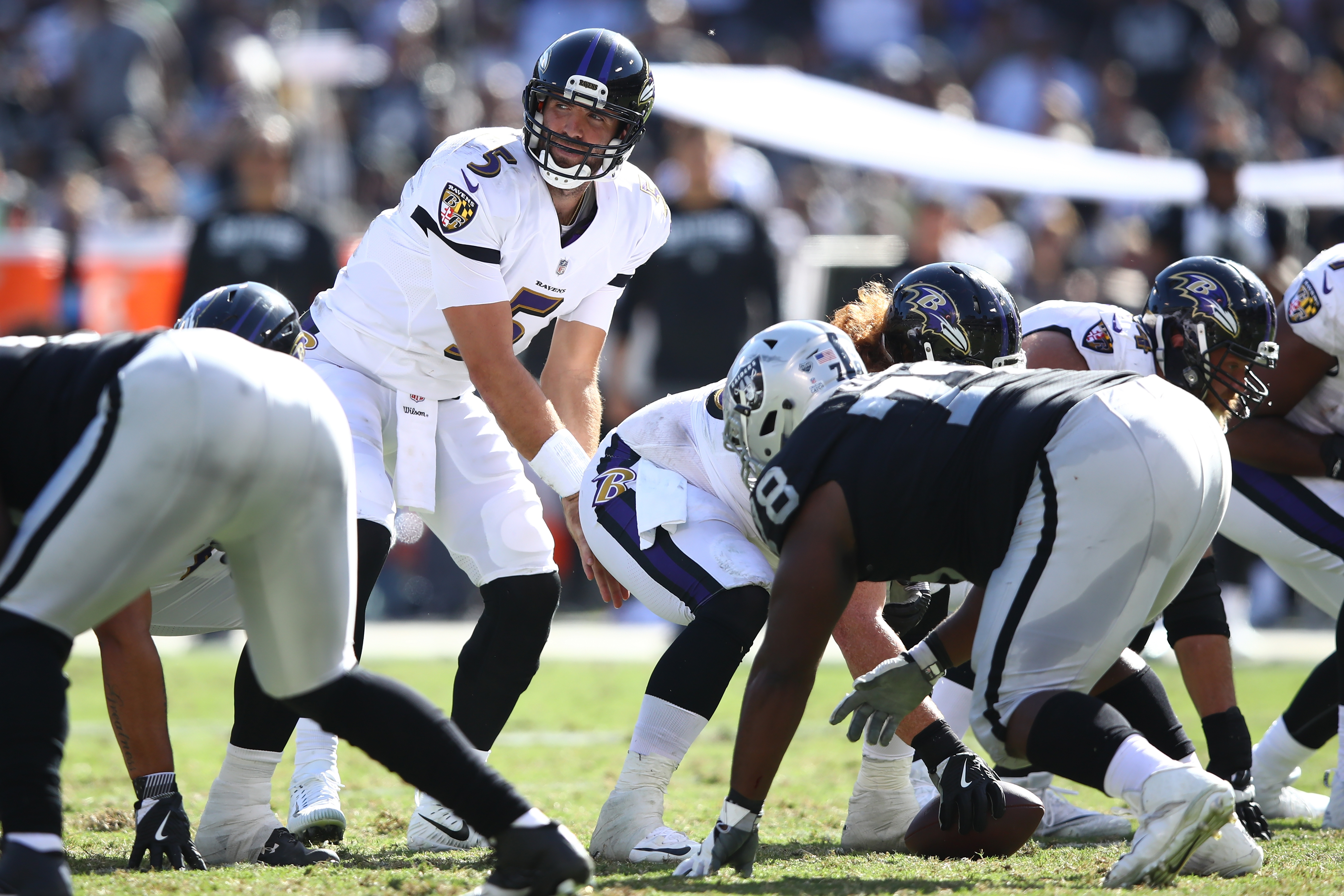 The Baltimore Ravens came right out of the gates and punch the Oakland Raiders directly in the mouth.

OAKLAND — The Ravens improved to 3-2, defeating the Raiders 30-17. Right out of the gates, Baltimore attacked an Oakland defense which missed cornerbacks David Amerson (concussion) and Gareon Conley (shin). Ravens quarterback Joe Flacco went after the corners, tossing a 52-yard pass to Mike Wallace on the first play from scrimmage. Baltimore would end the 75-yard drive with a touchdown.

Flacco finished the day going 19-for-26, passing for 222 yards with no touchdowns and no interceptions. His interception streak has ended after ten games. The quarterback was extremely accurate as well, completing 73.08% of his passes and a passer rating of 98.6.

Wallace had three catches for 133 yards. The biggest difference for Baltimore is that they looked deep for a majority of the game. Flacco averaged 8.54 yards per attempt and stepping into Sunday’s game, the Ravens had just six passing plays of 20 yards or more.

“We got some looks we liked today,” Wallace said, after the game. “We started out, right out of the gates. It was great. I was hyped when I saw the play call. I thought, ‘I got to win.’ You have to. You can’t get a play-call like that and not win. They might not want to call it again.”

During his first three games in 2017, Wallace had three catches for 21 yards. However, over the past two games, Wallace has had nine catches, 188 yards and a touchdown.

Rushers Continue to Pound the Rock

Making things even better for Baltimore was its running game. Baltimore came into the game ranked ninth in rushing. In yesterday’s game, the Ravens rushed for 143 yards and two touchdowns combined.

Buck Allen led the pack with 21 carries for 73 yards and a touchdown. Alex Collins was second in rushing with 12 carries for 55 yards. With their 1-2 punch, along with a 2-yard touchdown rush by wide receiver Vince Mayle, the Ravens took advantage of their opportunities.

Baltimore’s offensive line did not allow a sack on Sunday. Flacco stayed upright for most of the day and wasn’t sack at all. Against the Pittsburgh Steelers, Flacco was sacked four times for 29 yards. He didn’t have much time to pass the ball, but the blame rested mostly upon his shoulders.

Reigning NFL Defensive Player of the Year Khalil Mack looked to wreak havoc on the Ravens, but Howard and Ronnie Stanley held him without a sack.

“I told them all game, specifically at the end of the game, how great of a job they did all day,” Flacco said. “Then at the end, they’re putting it on them and being able to run the clock down and do what we did, that was huge.”