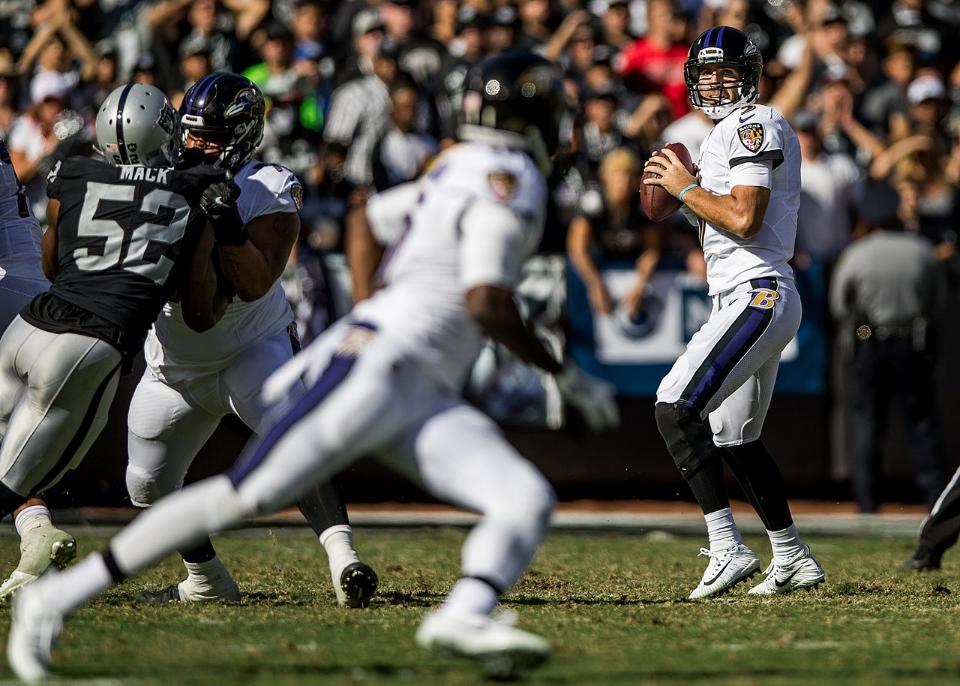 The Baltimore Ravens are coming up on the bye week and the season has been in disarray.

Issues has been coming in left and right without an answer in sight. From injuries to lack of talent, the Ravens season looks bleak. Pundits can see the potential of this team to be good but it has yet to be seen on the field. Should the Ravens tank or try to salvage the season?

How did the Ravens they get here?

Through nine games, the Ravens are 4-5 and mediocre at best. Countless injuries to players like Marshal Yanda, Tavon Young, and Kenneth Dixon hurt the progress of the team. Of course every team has injuries but the amount of players the Ravens have on IR is unbelievable. With the lack of talent Joe Flacco won’t be able to produce. He’s not the type of QB that can elevate the teams and his natural ability has regressed.

Also, the coaching staff has been inept to say the least. Offensive coordinator Marty Mornhinweg has yet to call one complete game meanwhile defensive coordinator Dean Pees has two shutout performances under his belt. The defense hasn’t been 2000 Ravens defense good but they’re far from the problem. Head coach John Harbaugh is in real trouble due two three straight years of poor play through the entire team. If he doesn’t get this team’s head on straight he could find himself looking for a new job.

This time Jimmy Smith to the ?for the Ravens. pic.twitter.com/5vzyk43gj4

Where are the Ravens going?

If you talk to the casual fan they would say the 2017-2018 season is already over for Baltimore. But technically the Ravens could still reach the playoffs. I think the front office tells you where they think their team is by the moves they make leading up to the week 8 trade deadline. Most teams make deals to sure up the weak spots of the team and the Ravens haven’t done that this year. They did sign Jeremy Maclin, Danny Woodhead, and Tony Jefferson in the offseason so this year was pegged to be a big one.


Even though all the doubt from fans, the Ravens can still make a strong push for the playoffs. They are currently 2 spots back from a Wild Card place with one team in front of them (Miami) having played less games. If the playoffs is the goal, which it should be for Harbaugh’s job sake, then major adjustments are needed. The changes necessary could either propel this team to the playoffs or plummet them to a top-10 draft pick.

What changes must the Ravens make?

Playoffs? Maybe. But a shake-up is a necessity and we all see it. Reports surfaced about a potential return of Gary Kubiak as offensive coordinator. If the offense is to turn around, Kubiak’s return could funnel that. Flacco and the offense have never been better since Kubiak was around. Pairing him with the playmaking defense is a Super Bowl formula the Ravens are used too. Also some players are getting healthy thru this bye week which will improve the talent pool.


Different coaching tactics on the offensive end is what could make Baltimore look like a good team. Another aspect that would assist production is more running of the ball combined with the play-action pass. Flacco is at his best when he can use his arm for big throws down the field. Without receivers that are great at creating space, the play-action pass could make defenders hesitate and open up the passing game. Alex Collins and Terrance West need to get plenty of touches going into the second part of the year.