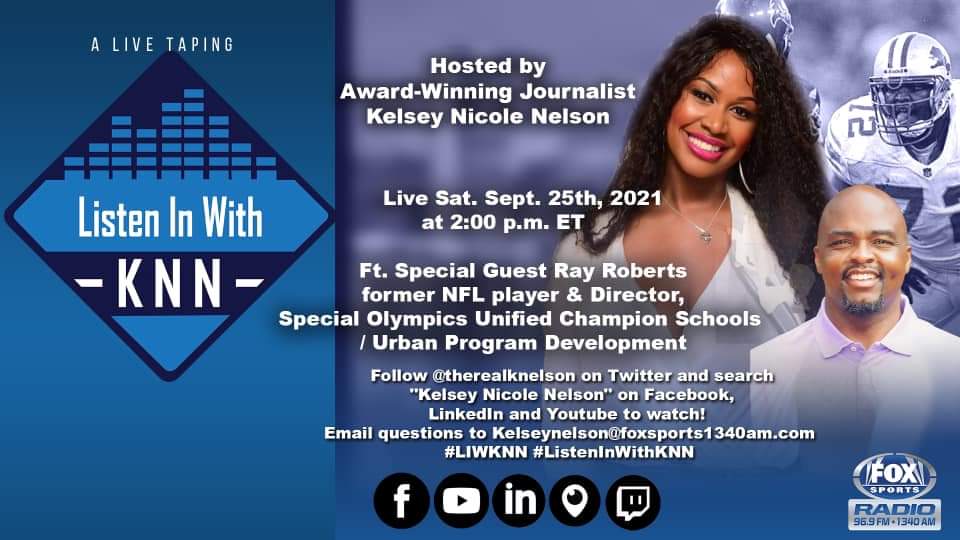 In his role with Special Olympics, Roberts’ job is to get the Unified Champions strategy of inclusion to urban city school districts all over the country. Special Olympics Unified Champion Schools (UCS) is a strategy for schools Pre-K through university that intentionally promotes meaningful social inclusion of students with intellectual disabilities by bringing together students with and without intellectual disabilities utilizing three interconnected components: Special Olympics Unified Sports, Inclusive Youth Leadership, and Whole School Engagement.

Ray Roberts is originally from Asheville, N.C. He fell in love with football early. Roberts described how early on, there was a lot going on at his  house.  He had trouble trying to figure out how to deal with all the emotions that were going on with his  body. “So, I’d go to these football games and my cousin is scoring all these touchdowns… They were patting him on the back… I was five or six-years-old thinking like ‘wow’ you can go and hit people really hard, they pat you on the back and they tell you great job…” said Roberts of finding his love for football.

This experience made Roberts immediately want to play football. Football was an outlet, a place where Roberts could let all of his emotions out through troubled times. Football also became a catalyst for Roberts to figure out who he was as a person, figuring out a pathway to a better life and ultimately later finding some security for his family and his kids.

He started playing organized football at Asheville High School in his hometown. Speaking with Nelson about growing up in his hometown Roberts said, “Asheville today, is not what Asheville was when I was growing up. I was born in 1969, so it was in the 70s and 80s and It wasn’t always a happy go lucky, hippy, artsy kind of place…” Roberts felt that there was a lot of racial tension back when he was growing up. He shared how sometimes he would have to fight dudes that were his friends.  “I never really let that really deter me from building friends and getting to know people individually for who they are,” said Roberts.

After high school, Roberts accepted a college football scholarship to the University of Virginia. At UVA he was a four-year starter, and a two-time winner of the Top Offensive Lineman of the year award in the ACC. Roberts was also a first team All American his senior year. Following his stellar career at Virginia, Ray was drafted in the first round of the NFL draft by the Seattle Seahawks. After four seasons with Seattle, Roberts later signed with the Detroit Lions. A calming yet motivational voice in the locker room and huddle, Ray helped pave the way for the great Barry Sanders to lead the league in rushing as well become only the third running back, at the time, to gain 2,000 yard rushing in one season. He retired from the NFL in 2001.

Nelson asked Roberts about his experience playing in Seattle with the Seahawks. “One of my favorite memories, my first year we went 2-14… Our defense was one of the top ten defenses in the league that year, but our offense only averaged eight points per game… Our team was super tight… It made me want to be a Seahawk forever… It was really hard to leave there as a free agent just because of that tight knit family team thing that you just didn’t expect in the NFL…” said Roberts. Roberts said that competition wise, he loved playing against the Raiders. In his day, Roberts had to go up against some tough competition his rookie year, going up against guys like Derrick Thomas, Lawrence Taylor, and even Howie Long.

During his time with the Detroit Lions Roberts had trouble with an ankle injury at the time he was entering free agency so the Seahawks did not offer Roberts another contract. “Detroit became interesting… It felt like I was back in the UVA locker room… The way he [Barry Sanders] carried himself was unbelievable for a dude that probably could’ve done or said anything he wanted and nobody would’ve said anything about it…” said Roberts. Roberts went to the playoffs a couple of times which was something he didn’t get to accomplish in Seattle.

Roberts also shared his experience transitioning from football. Today he is the Director of Special Olympics Unified Champion Schools/Urban Program Development. He’s also served as an ambassador for Special Olympics. “I went to one of my first press conferences and there were some other ambassadors speaking and I just felt ‘man I feel like I could deliver the message better…’ I went to the organizer committee and said “next time you need someone to talk about this stuff, let me do it…” said Roberts.

Interested in getting involved? Follow these steps: First, contact your local Special Olympics program. Every state has its own Special Olympics program. Contact them and let them know your interest. Secondly, “If you’re a school official, let us come in and tell you what we’re doing and how we do it and how it improves climate and student outcomes…” If  you’re a community person and you want to find wonderful opportunities for employees to engage in, it’s a great place to volunteer and offer resources to. Finally, “Take whatever gifts and talents that you have to help some other folks in need…”