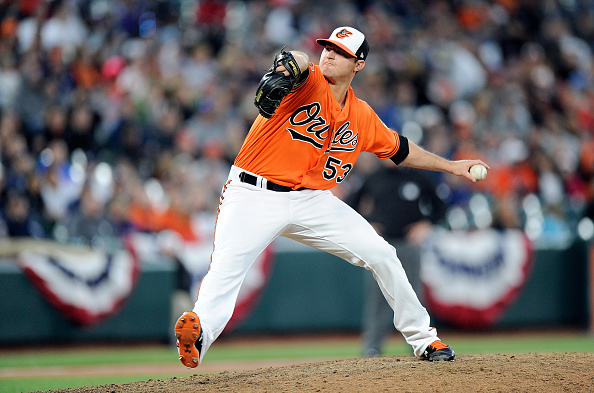 As it seems to be more and more likely that the Baltimore Orioles will become sellers, their top reliever has garnered the interest of a contending NL West club.

Britton hasn’t participated in many games this season due to forearm tightness. Through the course of 12 innings pitched, Britton has gone 0-0, with a 2.25 ERA, 1.750 WHIP, eight strikeouts and five saves. Last season, Britton was named the Rolaids Relief Man of the Year by going 2-1, with a 0.54 ERA, 0.836 WHIP, 74 strikeouts and 47 saves in 67 innings pitched.

The thought behind nabbing Britton from Baltimore is that he would be paired with Dodgers closer Kenley Jansen, who is having a career year himself. Jansen is currently sporting a 4-0 record, 0.96 ERA, 0.558 WHIP, 57 strikeouts and 21 saves in 37.2 innings pitched.

“Man, that would be awesome,” Jansen said, when he was told about the Dodgers interest in Britton by Heyman. “You just gave me goose bumps.”

If Britton and Jansen are together, they could form an 8th and 9th inning duo unlike anything that the MLB has seen before. Although this could cause excitement for Jansen, this could cause other teams to scramble.

“The Orioles, Dodgers and several other teams (the Nats might be at the head of the line; whereas the Dodgers are hoping to strengthen an incredible strength, the Nats need is “acute” in the words of one rival executive) could be interested,” said Heyman “While the Nats need to get someone good for the ninth inning, if the Dodgers got someone to dominate the eighth inning, they’d be seen as a prohibitive World Series favorite.”

The Washington Nationals are in dire need of a closing pitcher. It could cause them to make a deal to acquire Britton, one of which could cost them one of their top prospects. Currently, the Nationals rank last in bullpen ERA, holding a 5.20 mark. For a team that has World Series aspirations, it is highly unacceptable.

Reuter’s list considers Tier 1 prospects to be “rospects who have an elite skill set and legitimate All-Star potential. These are the guys that would receive consideration for a spot on a leaguewide top 100 prospect lists.”

The Orioles only have three Tier 1 prospects in catcher Chance Sisco, shortstop Ryan Mountcastle and recently drafted pitcher D.L. Hall. If they were able to bolster their farm system by trading Britton, they should look no further than the Dodgers.

Los Angeles currently has two Tier 1 prospects (outfielder Alex Verdugo and second baseman Willie Calhoun) who are in Triple-A. Baltimore needs pitching, so one can only assume that they would ask for either RHP Walker Buehler (Double-A) or RHP Yadier Alvarez (High-A).Washington, on the other hand, could only offer RHP Eric Fredde, who is their only Tier 1 pitching prospect.

Baltimore needs firepower in the starting rotation down the road and currently. The only way to do that is to dangle Britton to a club in need of relievers and has top-level prospects to offer. Though the Dodgers and Nationals are just two teams that could be interested, they may not be the only ones that would love to land Britton.