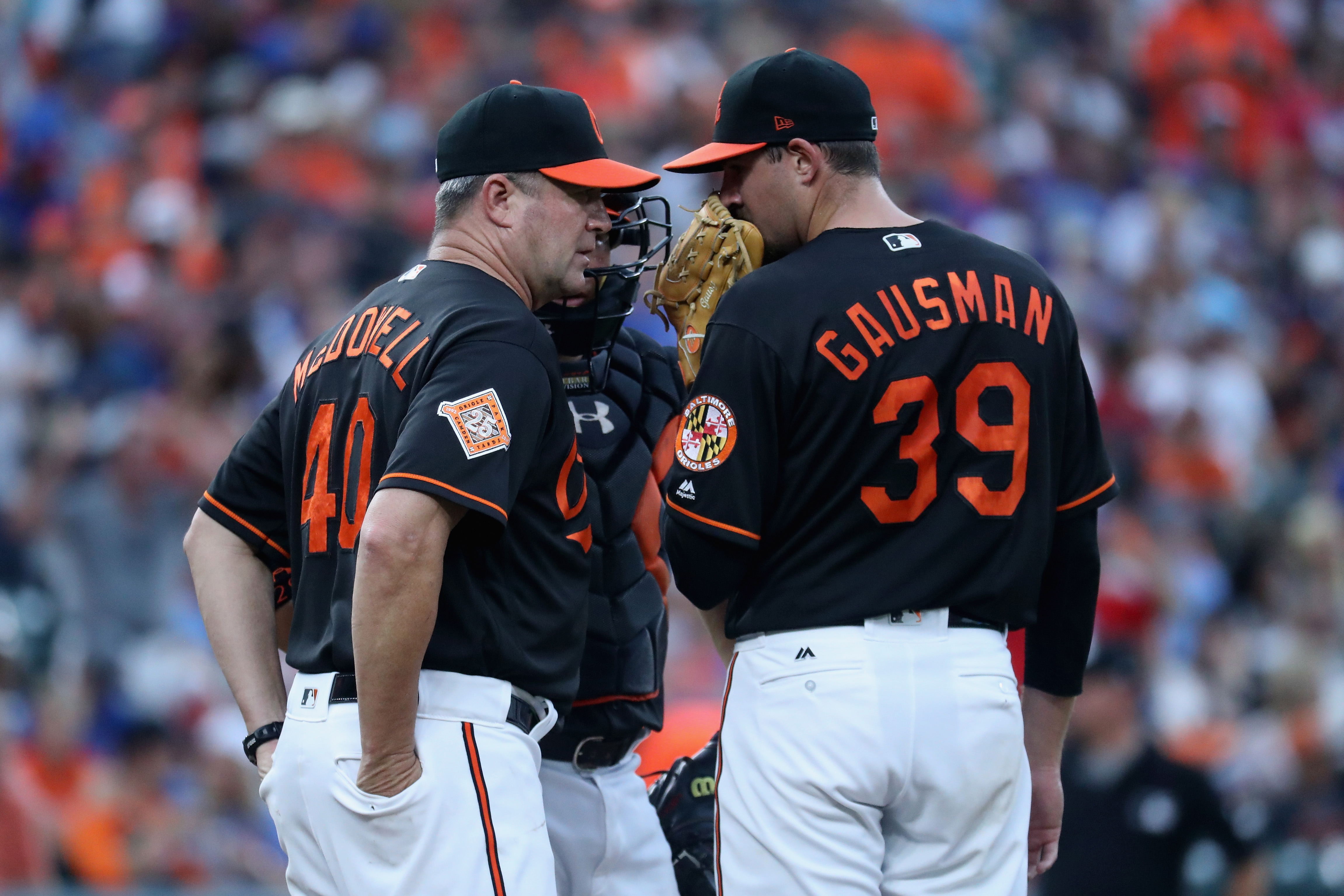 The Baltimore Orioles battled back from an early 8-0 deficit, but Addison Russell’s home run in the ninth gave the Chicago Cubs the win.

BALTIMORE – The Baltimore Orioles scored eight unanswered runs to tie the ball game in the eighth inning, but an Addison Russell home run in the ninth gave the Chicago Cubs a 9-8 win in their first appearance in Baltimore since 2003.

Brad Brach served up the game-winning home run in the ninth for Russell’s eighth blast of the season and the Orioles are now 42-47 on the season.

The start of tonight’s contest was pushed back 49 minutes due to a steady rain over Oriole Park at Camden Yards, marking the 12th time this season the Orioles have been delayed due to inclement weather. It did not take long for the Orioles starting pitching woes to rear its ugly head once again.

The Cubs welcomed Gausman and the Orioles back from the All-Star break with back-to-back home runs in the first inning to get the second half off to a terrible start for Baltimore. Ben Zobrist drew a full count in the first at bat before doubling down the left field line. Following Anthony Rizzo’s single to give Chicago runners at the corners, Willson Contreras belted a three-run home run to left center for the first runs of the game. Kyle Schwarber, making the start as the Cubs designated hitter, took the next pitch to nearly the exact same spot to make it 4-0 for the Cubs.

Things did not get any better in the second for Gausman as served up another home run, this one of the two-run variety off the bat of Zobrist. Gausman was clearly off his game after the homer as he threw one behind Kris Bryant a couple pitches later.

The deep shots did not stop there for Chicago as Jason Heyward added another two-run blast to make it 8-0 in the third. Heyward’s home run landed on Eutaw Street, the 92nd homer to do so, and 52nd by an opponent.

Gausman finished the third inning, but not before giving up a career-high four home runs and matching a career high with eight runs allowed. Gausman had not allowed a home run in his prior three starts prior to tonight, but fell victim to the long ball early.

Showalter’s bunch could have easily packed it in after going down eight runs so quickly, but continued to battle back against Cubs starter Mike Montgomery. Welington Castillo gave Baltimore their first hit and run on the night with his solo shot to lead off the bottom half of the third inning to make it an 8-1 ballgame.

The O’s had a chance to tack on another run on a Manny Machado double, but Adam Jones was halted at third base on fan interference. Jonathan Schoop grounded out to end the inning to keep the Orioles at one run.

Richard Bleier came on in relief of Gausman in the fourth and quickly got the Cubs down in order. Baltimore responded with a leadoff walk from Mark Trumbo and a RBI double from Chris Davis to give the O’s their second run of the evening. Davis moved to third on a wild pitch by Mike Montgomery with no outs, but the offense stranded him there on three hit balls that did not leave the infield.

The Orioles were able to chase Montgomery in the fifth after Machado and Schoop reached base on a single and ground-rule double. Trumbo plated Machado to make it 8-3 on a RBI single to right field. Mancini followed with a RBI single of his own two batters later to cut the Cubs lead to 8-4. Castillo drew a walk to load the bases with two outs before Joey Rickard came through with a RBI double to make it 8-6 to get the Orioles back into the ballgame.

The Orioles saw two of their former relievers – Pedro Strop and Brian Duensing – in the sixth, and had the go-ahead run at the plate with runners on first and second. Unfortunately for the O’s, Davis popped out to end the threat, and it remained 8-6. Baltimore found themselves in a similar situation in the seventh inning with ducks on the pond at first and second, and two outs, but Adam Jones struck out to end the side. Baltimore would strand 10 base runners on the night.

Baltimore tied it up in the eighth on the third two-run blast of the night for the O’s. Schoop reached on a single that was just out of the reach of a diving Heyward, and Trumbo belted a high fly ball over the wall in left to tie the ballgame at eight runs apiece. It was home run number 15 on the season for Trumbo.

The lead did not last long as Brach served up the game-winning home run to Russell in the ninth to give Chicago the win in the first game of the series.

Zobrist had two hits off Gausman and is now 8-for-13 (.615) with 5 RBI lifetime against the right hander.

While much did not go right for Gausman, he did eclipse 500 strikeouts for his career. He currently has 502 strikeouts in his five-year career.

Chris Davis went 1-for-5 after being activated from the 10-day disabled list earlier in the day. Outfielder Craig Gentry was outrighted to Triple-A Norfolk after clearing waivers.

Zach Britton pitched a scoreless eighth inning in his fourth appearance since coming off the DL. The Los Angeles Dodgers are reportedly interested in acquiring the Orioles closer.

The second game of the three-game set will feature former Oriole Jake Arrieta in his first appearance in Baltimore since being traded to the Cubs on July 2, 2013. Ever since leaving the O’s, he led MLB in wins to earn the NL Cy Young Award in 2015, has pitched two no-hitters and won a World Series last season. He is 8-7 with a 4.35 ERA this season.

Wade Miley will take the bump for the O’s sporting a 4-7 record with a 4.97 ERA on the year. He got a win in his last outing on July 8 against the Minnesota Twins, allowing one run on eight hits and three walks with four strike outs.