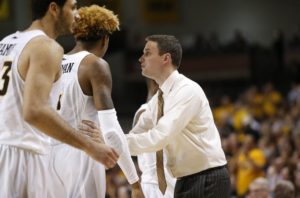 In a game VCU needed to stay in the race for the outright A-10 Championship, the Rams fell flat. VCU fell to the Dayton Flyers, who were a game ahead of them in the A-10 conference, 79-72 Wednesday night.

Dayton was able to obtain an 11 point lead midway through the First Half, which seemed too much for the Rams to overcome. VCU was able to gain some momentum and cut the lead down to two with about three minutes left in the game, but that’s as close as they got. Dayton never trailed at any point in Wednesday’s game.

You’ve heard the saying “You live and die by the three.” Well, that’s what happened with the Rams against Dayton. VCU went 2-15 from beyond the arch which resulted in shooting percentage of 13%. Dayton, on the other hand, shot 40% from downtown.

After going on a nine-game win streak in February, VCU has dropped their last two games to Rhode Island and Dayton. Where were both games played? On the road.

This year, the VCU Rams are an astonishing 14-1 when playing at the Siegel Center. Flip the script to the road and it’s a different story. In games played away or on a neutral site, VCU is 9-6.

Many “bracketologist” believe VCU will make the NCAA Tournament, but they are right on the bubble. The Rams head into their last game of the season against George Mason at 23-7. They have some quality wins and close games against good opponents. They also have a few bad losses on their resumé as well.

The Rams have clinched the second seed in the A-10 tournament, but with their struggles on the road, that may not matter. This year’s A-10 Tournament will be held in Pittsburgh, Pennsylvania, which is about 250 miles north of Richmond, Virginia. The Ram fans travel well, but this seems to be more of a mental thing than anything.

Coach Wade has to get his group focused for the stretch run coming up. A win against George Mason should guarantee VCU a ticket to the big dance. A successful A-10 Tournament should help with their seeding. Making the tournament is great, but a one and done just means you have played one more game than about 300 other schools.