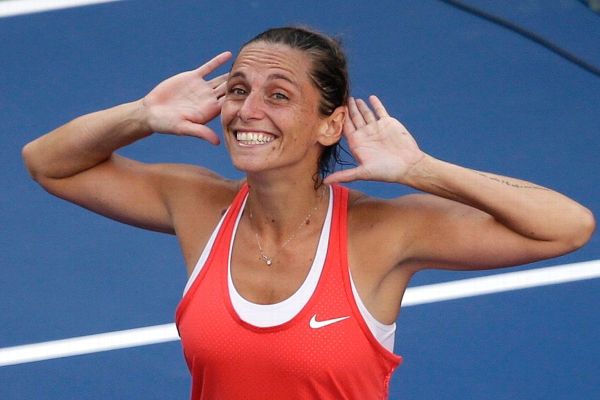 Former US Open finalist Roberta Vinci has decided the Italian Open in 2018 will be her final tournament as she plans to retire.
The Italian Open also known as Internazionali BNL d’Italia is held in Rome, the hometown of Roberta Vinci, in May. Via social media and an interview with La Gazzetta dello Sport, Vinci wants her final appearance in tennis to be in front of her fans. Instead of a sad farewell, she mentions it’ll be a party.

In Vinci’s interview, she just wanted her fans to all know she was forever grateful.

“I’ve decided to continue and return to the court, but not for the whole year,” 34-year-old Vinci said. “I’ll finish at the Foro Italico. In the middle of the season I will say goodbye to tennis and it’s something I’ve considered for a long time. I’ve decided to make one last appearance in front of the Italian public as a way of saying thanks to all Italians.”

Injuries contributed to the Italian’s decision as that is also the reason her ranking dropped to No. 117. She can definitely look back in her career and be proud of the accomplishments set in stone.

That victory went down as one of the biggest shocks in tennis history.

In Vinci’s doubles career, she was ranked No. 1 alongside Sara Errani as they both completed a career Grand Slam. They were the fifth pair in tennis history to do so.

Qualifying for the Australian Open in January is next on the agenda as the next five months will fly by quick. Nothing can be taken away from Vinci as she currently holds 35 titles combined in singles and doubles competition. She’s also one of few to use a one-handed backhand.

The joy of the Italian returning home will be a sight to see. As they say, when in Rome do as the Romans do. So come May, make sure you join her fans and get ready to party.